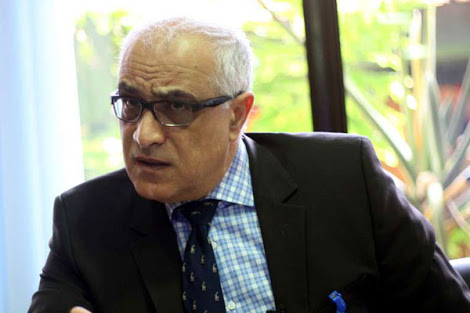 Aga Khan University Hospital remains the leading premium healthcare in the region a position it has retained over a lengthened period. Given it’s high standards, the hospital has remained the most preferred provider for the Kenyan elites. However, all that glitters is definitely not gold us our investigations have revealed.

The reputable hospital is sitting on a time bomb with a dejected staff who’re by design puting the lives of many patients who put their trust in the facility in grave danger. According to multiple sources we’ve been talking to during this investigation, the hospital which has long been run by the Ismaili Community is at it’s worse and most hostile state under the CEO Mr. Shawn Bolouki who is described as terrifically racist and mighty arrogant.

Bolouki has a stunning profile to hide the descriptions above, “Mr Shawn Bolouki has over twenty-five years of leadership experience in healthcare, and has ​during that time achieved major financial and operational successes in acute-care hospitals and medical care centres ranging in size from 120 to 1200 beds.” Reads the praises on him on the AGKUH website. “Mr Bolouki’s​ experience spans various hospital types, including academic, not-for-profit, faith-based, investor-owned and government hospitals, both individual and in comprehensive healthcare systems.” It continues.

Prior to joining Aga Khan University Hospital, Nairobi, Mr Bolouki was Chief Executive Officer for the Tulare Regional Medical Center (TRMC), Tulare, California, where he held executive leadership positions from the years 2008-2014. With a beaming CV, Bolouki has brought with him gloom to the Parklands based hospital.

According to sources and reports in our possession, the Hospital Management has gone on extreme by shedding off local staff and being replaced by foreigners. This is done in the guise of reshaping the  hospital. Just last year, about 400 staff members who had worked with the hospital some for decades were aced without notice not even a court interjection could stop this mass firing given the influence His Highness Aga Khan enjoys in the Goverment.

It emerged that posts created by the firing was filled by foreigners as that was the plan. Aga Khan is like ‘Islamabad’ one source describes the situation in the hospital. This is in reference to the high number of imported Pakistan nationals there. Majid Twahir, the Aga Khan Hospital medical doctor is roped in as one of the thorns that’s dragging the facility into its knees. He used to be a very good Doctor according to those who know him but once he got the post he turned his back on Kenyans and joined Bolouki in frustrating and blackmailing local doctors in their filthy racist cause.

A pattern has been drawn of inconsiderate firing of local doctors who’re immediately getting replaced by the foreign doctors. “Aga Khan is no longer what it used to be, things are at the worst, the doctors and staff here are just here not by heart but because they have bills to pay, Bolouki has made this place a living hell” one of my highly places sources at the hospital.

We’ve been informed of a pattern where by inexperienced and doubtful doctors are imported from Pakistan and Iran and quickly alley we nynrhe medical board which is another scandal altogether to replace local experienced doctors. We’re tild the management prefers the foreign naive doctors as they’re not as expensive and they don’t question the management, they prefer them that naive and enslaved.

Unmentioned exodus of experienced doctors has been undergoing at the hospital which is a cause for alarm, “Aga Khan is losing the best brains in the medical space because of hostile environment from the management” But the management under Bolouki arrogance doesn’t seem to give a damn. Aga Khan has been receiving several resignations but this hasn’t stopped Bolouki from running it like a school hostel.

“For them(Bolouki and his team) nothing matters to them than making money, now chances are when you’re admitted at the hospital you’ll be attended to by the residents(trainees) since most specialists are refusing to work with Aga Khan” another source confides in me.

Management of Aga Khan is the face of racism, nearly all departments and more so the strategic positions of financial flows are headed by the Wahindis, we’re told and collecting evidences that we will post in our subsequent expose how they’re also conspiring in defrauding the hospital through backdoor deals.

Positions that can be held by Kenyans are unnecessarily given foreigners for instance, the Head of Security, surely, you want to tell me there are no qualified Kenyans to effectively run that docket? But the favoritism doesn’t stop at that, Mr Khurram (Pakistani) now heads Budget and Planning department which was previously headed by Peter Maina. Prof Ojwang has been displaced at the Pathology department Prof Zul and Moloo while Pharmacy department now has 4 foreigners (Zyaid, Raza, Flakana and Zurndiji) replacing Joyce Nduati. Engineering department is now headed by Zaaker Ian replacing David Kimeu.

Prof Raja head of surgery is also frustrating manu surgeons  & he’s got his own puppet young & very good upcoming doctor but he is destroying his reputation. Finance is Aleem Merali, Radiology is headed by Dr Vinayak a Pakistani who we learn recently made a good radiologist leave the department.

Vinayak is also a business man and one of those under our probe for subsequent release on insider dealings. IT department is run by Tarun Aron, this chap doesn’t  even understand Swahili & his English is zero, how he got such a job leading giant geeks around is a result of the racism at the institution.

Believe it or not, Aga Khan is understaffed, as a business strategy, a big part of the work force was laid off and the few remaining are overworked, overwhelmed, doctors and staff at Aga Khan are working like stages in the cotton field with harshest conditions.

Staff are not allocated leave in some departments and some don’t even get to have lunch breaks because of many patients and minimal staff. The staff don’t find time to rest, many are working around the clock, I don’t need to go to the consequences of a fatigued doctor and other medical staff while we have Kenyatta National Hospital to tell us clearly on negligence. We also have negligence allegations on Aga Khan but currently under review, we will publish on verification.

Mass exodus of experienced doctors who’re now going to full private practice is real, this you can confirm from anyone in the healthcare scope. Mr Bolouki and his arrogance is running the hospital down, many of longtime clients and the general good perception of the hospital from the experienced doctors is what keeps them going but if this is replaced then patients will follow their doctors.

The harsh realities that are deeming the shine of Aga Khan might not reach His Highness the Aga Khan who only get to see the financial reports so the dejected staff who holds the future of the hospital go unchecked. Bolouki prefers to work with the naive and easy to manipulate staff who take his commands without a question mark.

The staff might deliver because of the nature of their work but the word that may reach His Highness the Aga Khan is his staff is completely demoralized and Bolouki isn’t stopping anytime soon so this means the patients are being handled by shaky, tired hands. No one is ready to face such hands. Medical staff have Cover limits, we’re tild you must get clearance from Majid Twahir, the medical doctor before given medication and staff limited to Sh50,000 limit for outpatients goes to show how enslaved the staff are.

Racism and overflowing of foreigners at Aga Khan must be checked before we let a lose system take away all the jobs for Kenyans. Aga Khan has the space to shut down Kenyan facilities and move the Islamabad if they only want to work with Pakistani and Iranian nationals. However, the Goverment and immigration department must without hesitation, jump to audit the Aga Khan foreign staff who’re being imported to take over positions that could otherwise be held by Kenyans.

If this is overlooked and the colored are favorited at the expense of locals then the Goverment would’ve failed in securing the interests of its own citizens and opening the space for manipulation, we already have information and pursuing for publication similar racism and mistreatment of local staff on Coptic,Guru Nanak.

Immigration must vet and withdraw work permits and consequently deport foreign nationals in Aga Khan imported as expatriates on positions that can be held and work done by Kenyans. This is a serious concern that must not pass the officials who also happen to be Aga Khan Hospital clients. The President must support this as he champions for the development and security of jobs for Kenyans.

Starting with Aga Khan and the rest of such, the authorities must help in securing the opportunities for Kenyans or there will be no country for our own professionals. The UK recently opened the doors for doctors removing visa limits. As we import doctors from Cuba and Pakistan to Aga Khan, I predict a mass exodus of Kenyan bred specialists to the UK which will leave a great void in the healthcare.

And with an hostile environment existing at Aga Khan, doctors forced by circumstances to stay at the hospital will without a second guess jump the ship. For how long will Bolouki and the management, overlook the welfare of the staff at Aga Khan by being dismissive and defensive while the facts shows good doctors are leaving and only the residents are left to handle cases some of which are out of their scope. Why let mismanagement leave patients in the hands of trainees? The mighty Aga Khan University Hospital is losing its glory but who will help the sickening situation? Do we have your ears yet? The expose continues…