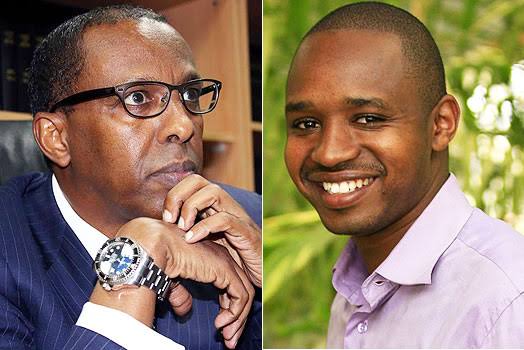 The photographer who doubles as Human Rights activist and the PAWA254 founder Boniface Mwangi has slammed Senior Counsel Ahmednasir Abdullahi for supporting and offering legal service to city land grabbers. In 2017, the activist exchanged words with the lawyer over the same issue. Here is a tweet Boni posted on 4th April 2017.

Earlier today, Boni tweeted that the court has allowed them to reclaim Racecourse Primary School land which had allegedly been grabbed by the Ahmednasir’s client.

.@ahmednasirlaw is the lawyer to a landgrabber who had stolen part of Racecourse Primary School.The grabber even attempted to bribe @EACCKenya.We finally got the title, today we demolish the structures he had bulit in the school illegally. In July he used cops & goons to stop us. https://t.co/CLJxwBjlzM pic.twitter.com/ArnFs5P7Wl

Boni went ahead and invited SC for a Team Courage they demolish the structures his land grabbing client erected.

In his defence, Senior Counsel Ahmednasir Abdullahi said that the case was settled in court and Boni with his Team Extortion are busy going to evict non-existing developers. He also said Boni is a “Greedy Boy”

Boniface.. This matter was resolved in court. See the consent sent to the Registrar of the High Court…and then you lie to some people that "team courage"…which is TEAM EXTORTION is evicting nonexistent people…SHAME ON YOU…GREEDY BOY… pic.twitter.com/urchkJEy9I

The senior counsel has also been accused of allegedly using privileged information from those he deals with directly and illegally shares the Intel with the State agencies, like NIS, if the deal goes south.

Related Content:  Levin Opiyo: Untold Story Of Dr. David Silverstein The Moi’s Doctor ‘Doktari’
Kenya Insights allows guest blogging, if you want to be published on Kenya’s most authoritative and accurate blog, have an expose, news TIPS, story angles, human interest stories, drop us an email on [email protected] or via Telegram
Related Topics:Ahmednasir AbdullahiBoniface Mwangi
Up Next

Security Threat: Why KQ’s Handling Of The Stowaway Is Below Aviation Standards And Could Cost JKIA Category 1 Status