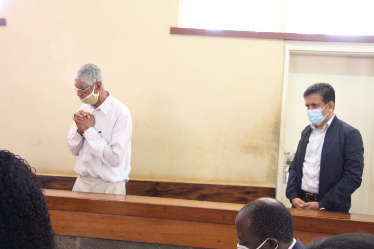 A fraudulent conspiracy, greed and abuse of office – norm at the land offices has been this time round been shuttered by Environment and Land Court Judge S Okong’o has blocked an attempt by the Asian cartels to defraud their victims a prime parcel of land in Westland.

Main act in the criminal scene is one Bhupesh Hardshadray Rana who have inflitrated Ministry of land and the Companies’ registration office. In this case, a former MP for Ntonyiri now Igembe North constituency Joseph Muturia is embroiled after it emerged that Rana and his team fraudulently sold him land at a whopping Sh12 million.

Muturia purchased the land through his company Fairmile investment Limited which was listed as the 1st defendant in the case. While selling the land to the former legislator claimed that he held power of attorney donated by one Kantilal Maganbhai Patel who he claimed was the registered owner of the land.

Maganbhai Patel was listed as the 2nd defendant in the case. Trouble started wayback in 1963 when one MJ Patel who was the original owner of the land LR No 209/73/12 sold it to a company known as HP Youtan and Limited Company.

On Feb 17, 1964 – HP Youtan lodged a caveat against the title of the property claiming purchaser’s interest. Unfortunately, Patel who was the seller died on May 18 1967 before transferring the land to HP Youtan and therefore grant of letters of administration in respect of the estate was issued to his son, Patel. A back and forth court cases that took decades ensued between Patel and HP Youtan regarding the ownership of the same before HP Youtan emerged victorious in 2001 when it was declared the indisputable registered proprietor of the property.

Another stumbling block for HP Youtan was the fact that the property was leased to the original seller MJ Patel by the government for a term of 99 years with effect from July 16 1903 with expiry on July 16 2002 barely a year after he was declared rightful owner of the property. On July 20 2006, HP Youtan applied for the extension of the lease only to fall into the hands of cartels.

It all started when the commissioner of Land informed HP Youtan that it’s application for lease extension has been approved and the government had agreed to renew lease for a further term of 50 years with effect from July 1 2002. The deal was so good that commissioner of lands requested HP to submit a new deed plan approved by directors of surveyors and pay 19,000 to cover for annual rent with effect from December 1 2006. Another 8,465 was deposited on account on account of land rent, registration, stamp duty and approval fees.

December 21 2006 the lands commissioner issued HP letter of allotment for the extended lease and was issued with a receipt for the same after paying another 8,465 on May 15 2007 again for allotment. It is imperative that HO Youtan was issued with said allotment letters, it’s application for extension was approved by directors of physical planning on August 17 2006, the city council of Nairobi and the Director of surveys on August 30 the same year.

This is how con artist Rama and in a strange turn of events on May 2008, Rama who masqueraded to be attorney of Patel made a brazen move and applied to the lands commissioner for the renewal of the lease in favor of Patel and September 18 2008 commissioner of lands issued allotment for the lease extension to Patel as requested by Rama.

The lease was extended for a term of 50 years with effect from October 1 2008 and 11,630 was paid. October 24 2008 before even Patel paid for allotment Rana had been joined by another crook in the name of Bhogilal Chotalal Galatea who was introduced as the co-attorney of Patel alongside Rana himself.

The duo entered into agreement for the sale of the property with the former MP Muturia and sold him the land at a whopping Sh12 million  of which the transfer to Muturia and registration was done on November 27 2008. Red flag was raised when Rajendra Sanghani and Jayant Rach went to collect rent at the controversial property as usual but were rebuffed with claims that the estate had a new tenant who was Muturia.

The two sons of Ratilal Sanghani purchased the property from Patel at Sh100,000 in 1973 under HO Youtan Company Limited.

When the politician bought the property, it was registered in the name of HP Youtan and not Patel, prompting the sons to report the matter to the police. Which in turn Rana and Ganatra were arrested and charged with fraud and forgery at Kimani Law Courts under criminal case No E279 of 2021.

The Judge noted that Patel, obtained the renewal documents from Rana and Ganatra through misrepresentation, fraud and deceit. Judge thwarted Muturia‘s attempts to project himself as innocent buyer when he ignored the due diligence which could have alerted him that the property was registered in the name of HP Youtan.