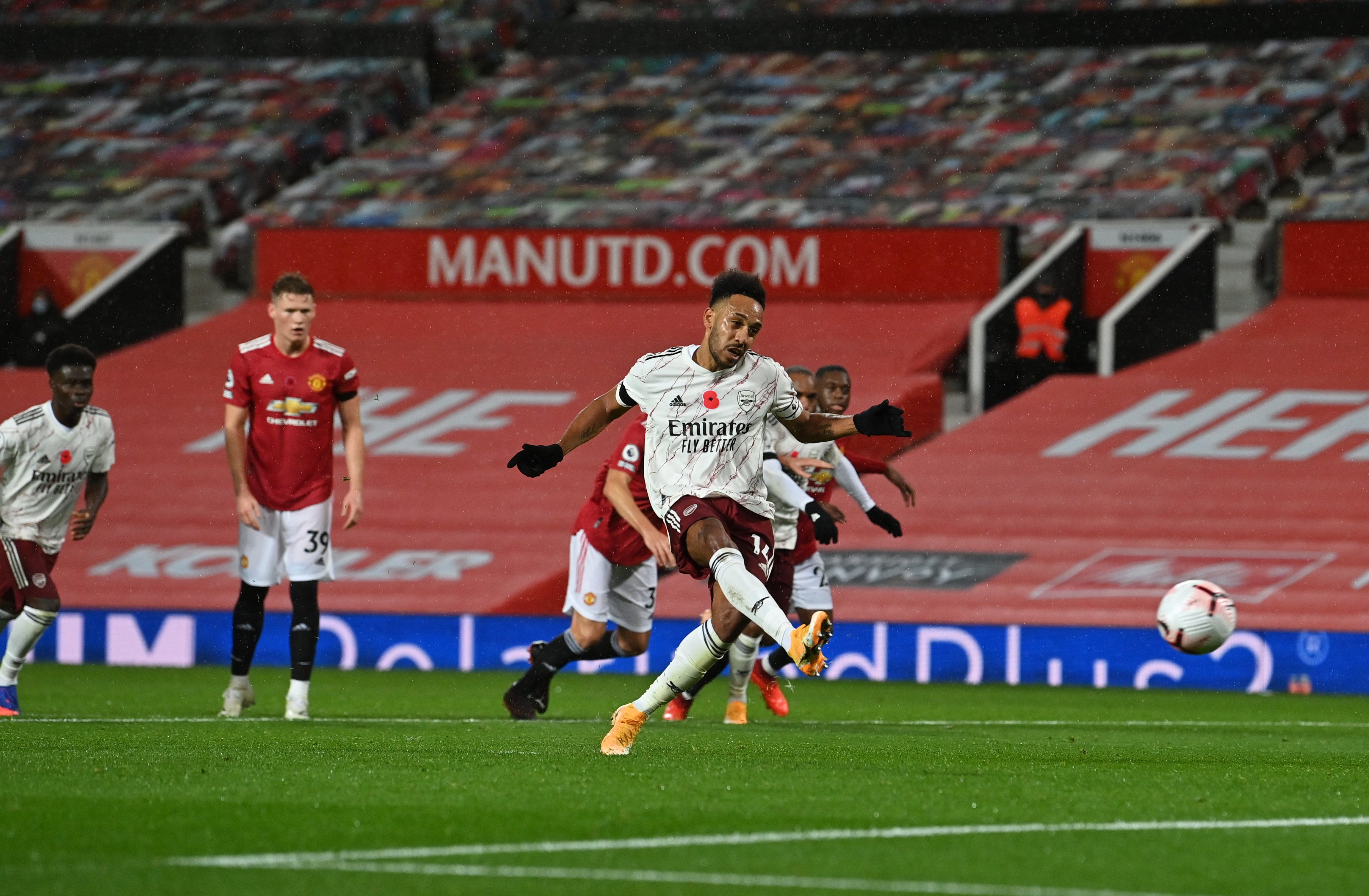 Aubameyang ended a run of five games without a goal by sending David de Gea the wrong way on 69 minutes after Paul Pogba had fouled Hector Bellerin.

United tried to rally but came no closer to an equaliser than when Donny van de Beek’s cross-shot flicked off Mohamed Elneny and then into the face of goalkeeper Bernd Leno before bouncing to safety off a post.

It was not the greatest contest between two clubs who used to fight it out for the biggest prizes but are now a pale imitation of their former selves.

While Arsenal will be delighted at the deserved victory, this was not the kind of United performance that did justice to the memory of club legend Nobby Stiles, who died on Friday.

Pogba is the most high-profile figure in the United midfield that World Cup winner Stiles used to operate in. But the Frenchman had a day to forget, giving the ball away too cheaply when his side attacked and needlessly fouling Bellerin to turn the contest Arsenal’s way.

The Gunners now have 12 points and are up to eighth and United remain in 15th on seven points.

Arsenal end long wait for a ‘big six’ away win

It is only two weeks since Arsenal visited Manchester and did quite well, only to lose to a Raheem Sterling goal at City. Last week, United and another London club, Chelsea, played out a thoroughly forgettable goalless draw at Old Trafford.

The first-half of this contest felt like a combination of the two games.

United were a shadow of the side that hammered RB Leipzig in the Champions League on Tuesday. Their one decent opportunity came when Marcus Rashford found Mason Greenwood with a superb pass across the area but Bernd Leno saved with his feet and would have been disappointed if he had been beaten at the near post.

Arsenal were decent. Egypt midfielder Elneny justified his selection ahead of Granit Xhaka with an excellent performance screening the visitors’ defence. William schemed ahead of him and Arsenal enjoyed the majority of possession.

But they never really looked as though they believed they could score.

Alexandre Lacazette might have done had Victor Lindelof not nudged Aubameyang’s pass away from him.

Willian skimmed the bar with shortly afterwards and Bukayo Saka should have done far better when Bellerin picked him out with a right-wing cross.

Aubameyang also lacked conviction when he curled an excellent chance wide after the break but given an opportunity from the spot, the former Borussia Dortmund man delivered, in the process ending Arsenal’s unwanted 29-game wait for an away win against a fellow ‘big six’ rival.

Solskjaer’s not celebrating his century

This was Ole Gunnar Solskjaer’s 100th game in charge of United – and it still feels like they are taking a step forward, before another going backwards immediately follows.

Over the past two weeks, United have been excellent at Newcastle, superb in Paris and brilliant against RB Leipzig. Inbetween they were tepid against Chelsea and worse in this game. Add in the 6-1 home defeat by Tottenham just before the international break and it is little wonder questions remain about Solskjaer being the right man for the job.

He stuck with the same diamond formation that worked perfectly against Leipzig, only to find it completely ineffective against Mikel Arteta’s well-drilled side, who did not allow United the space they had enjoyed in midweek.

In addition to Pogba, Bruno Fernandes was anonymous and it can only be concluded Edinson Cavani is still not properly fit, otherwise he would have been introduced far earlier than he was.

As it is, United are only three places above the relegation zone and while the season is still early – and they do have a match in hand – they remain without a home win.

It is the first time this has happened since 1972 and the gap to the clubs for whom they are expected to challenge for honours with is growing.

Related Content:  First Kenyan Movie Set To Air On Netflix
Kenya Insights allows guest blogging, if you want to be published on Kenya’s most authoritative and accurate blog, have an expose, news, story angles, human interest stories, drop us an email on tips.kenyainsights@gmail.com or via Telegram
Related Topics:
Don't Miss