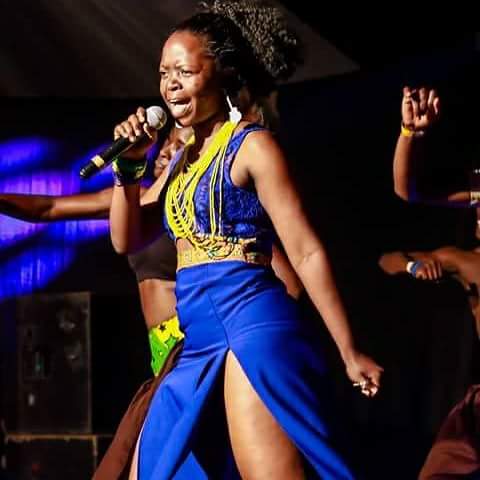 By Nicholas Olambo
Luo Festival went down in Kisumu attracting a good number of established artists with roots in the lakeside region, among them was an upcoming female artist Elizabeth Adhiambo aka Nahna who was the curtain raiser at the star studded event. The edition of the event was the maiden in the region, supported by Ramogi Fm and Jalang’o of Arena Media, all the previous editions have been held at Nairobi’s Carnivore grounds.

Male artists dominated the list of performers which included three female artists, Akothee, Lady Maurine and upcoming Nahna. Only in her early 20s, the Kisumu based artist was the star of the night outshining big names like Akothee who has collaborated with the continent’s big names like Diamond and Nigeria’s Mr. Flavour.

Nahna took to stage with bravado and unbeatable charisma proving she had the finesse to put the industries protagonists like Akothee to retirement bench. She was breathing fresh talent with an ability to last decades in the fast-changing game. She was the cleanser of the night when Akothee’s theatrics worked no magic but proof that she is only flashy and void of talent.

We are living in times when talent doesn’t matter that much but money, nude photos and videos of women shaking their behinds (twerking) in social media to cause some baby buzz and make them overnight celebrities. The ever-evolving production techniques have also done justice to the less talented artists. The T-Pains and Akothees of this world sound great on records and like frogs on stage.

Related Content:  Ifikie Wazazi: Spare Us The Hypocrisy, The Society Is To Blame For The Raunchy Internet Behaviour

This is the day the Artist of the night ‘saw red’ and the little known Nahna proved that there is talent in her that if nurtured, the game will rise from its deathbed. With only three songs under her belt, several ‘collabos’ and less than four years in the game, she has won best female artist award (Kisumu) three times. Last year she was the first-ever female artist to win the coveted region’s artist of the year award during the annual Vybez Awards gala.

Her latest project ‘Paro’ which translates into ‘remember’ in English was produced by Side B’s super producer, Ulopa aka Bwana Ngoma. ‘Paro’ is already a big hit enjoying massive airplay and YouTube likes. Nahna is surely a newcomer with a big buzz and bright prospects.

Rumored to be dating one of the industry’s insiders from the lakeside region who could be behind her rapid rise, the talented singer mentors young girls through art. She is a good combination of talent, brains, and beauty. Nahna is a graduate from Kisumu Polytechnic, she holds a degree in Business Management and prepared to take the industry by storm.

Bro. Philip Munyao taking off to hairy heights as he brings back the missing real gospel music