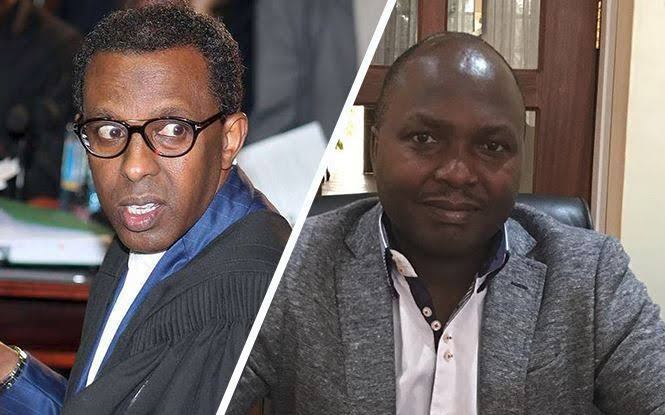 A friendly social media spat between two top lawyers has turned ugly court battle after one of the advocates accusing friend-turned foe of defamation.

Senior Counsel Ahmednasir Abdullahi and flashy lawyer Donald Kipkorir both enjoy mass following on twitter and have been exchanging banter on the handles on various topics including legal opinions, politics and intellectually.

Kipkorir popularly known as DBK who is a strong political supporter of opposition leader Raila Odinga has denied defaming lawyer Ahmednasir and has asked the court to dismiss the case.

In response to defamation case lodged by Ahmednasir, Kipkorir says Ahmednasir’s reputation is not worth peppercorn damages.

Kipkorir denies posting, publishing and circulating the alleged offending tweets on his personal Twitter account knowing the same to be false.

According to lawyer Kipkorir, veteran lawyer Ahmednasir has no professional profile that is worth emulating and capable of defamation.

Lawyer Kipkorir adds that Ahmednasir in his twitter handle ‘@Ahmednasirlaw,” where he has more than 1.9 million followers, he has demonstrated a peculiar fecundity to attack,damage and spoil reputation of Supreme Court Judges ,Court of Appeal Judges,High court judges lawyers and members of public.

“The plaintiff used his position as the president of Law Society of Kenya , the chairperson of Kenya Anti-Corruption Commission (KACC) and as commissioner of Judicial Service Commission (JSC) to extort and intimidate judges , judiciary employees and members of the public,” lawyer Kipkorir says in his court documents.

According to Ahmednasir, Kipkorir tweets were meant to discredit, embarrass and lower his dignity in his capacity as respected member of the society and advocate. He further says it was meant to bring him ridicule, contempt and disrepute in the eyes of any right thinking members of society.

Kipkorir denies his alleged tweets were not intended to be defamatory, libelous contemptuous or disparaging to the senior Counsel.

“I reiterates that subject tweets were true and justified in the context, and we’re neither actuated by malice nor were they malicious,” says Kipkorir.

He further dismisses claims that Ahmednasir has not and is not suffering any harm to his personal and professional reputation as a result of the subject tweets.

Kipkorir insists that Ahmednasir has used his Twitter handle to abuse, insult and intimidate all and sundry and in particular him, in the context, Ahmednasir has no reputation that he desires to protect and his therefore undeserving of any award of damages and prayers sought in his suit.

“Whereas there is no doubt that lawyer Ahmednasir has succeeded in making money, his qualifications, trustworthiness, competency and honesty has been and remains in question in the public arena , judicial and parliamentary proceedings,” adds Kipkorir.

Ahmednasir in his suit claim that prior to lawyer Kipkorir posting the offending statement, he was enjoying excellent and priceless professional reputation as a qualified, trustworthy, competent, eminent lawyer and an acclaimed practitioner who has attained the zenith status of senior Counsel which shaped and defined the legal industry over several years.

In his defamation case against lawyer Kipkorir, Ahmednasir wants the court to enter judgement against the law including general damages, aggravated damages and exemplary damages.

Related Content:  Fidel Odinga's Property Battle To Be Settled Out Of Court

He also wants lawyer Kipkorir to be compelled to pull down the alleged defamatory tweets against him and issue an unqualified apology.