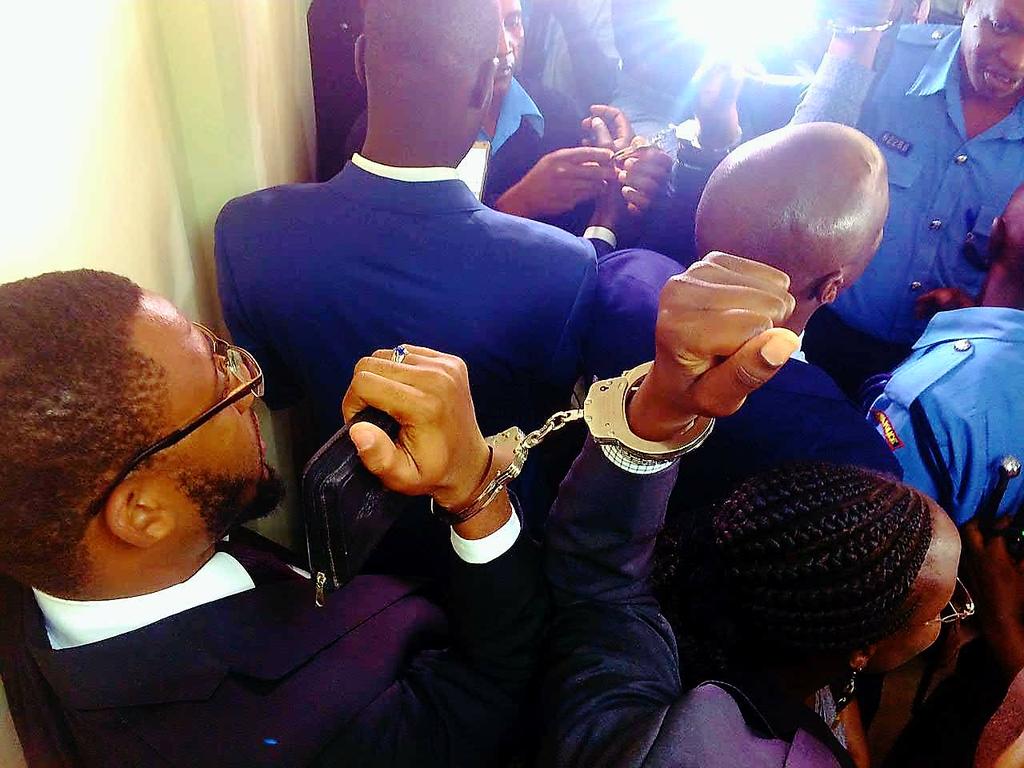 A drowning man will try holding onto air as he takes his last breath before going to the river bed. After touching all vital parts to a positive outcome, the government, at last, decided to jail doctors officials following the beam of unsuccessful and dishonest negotiations to end the doctors that have now extended to 72 days.

The falsehoods that have been floated around by the state as part of larger conspiracy to demonize doctors including quoting a ridiculous 300% pay increase by doctors a demand that was cooked by a disillusioned mind yet not captured in the CBA. We’ve been treated to chained propaganda towards doctors during the strike period.

As it became clearer later, the negotiations lacked honesty and commitment to anything the government negotiators that is Mailu and Muraguri were preoccupied with internal rivalry and other unofficial duties. While doctors showed up to empty boardrooms to negotiate, the PS and CS were missing, and on a good day, they’d delegate oblivious junior staff to talk with doctors. Muraguri was preoccupied with the construction of his Sh200M mansion keeping in mind he was primarily mentioned in the 5B MoH looting. Mailu, on the other hand, was traversing the country joining political bandwagon pushing for voters registration.

The laxity in solving the doctors strike became evident by the day. Threats and intimidation, as well as bribery, occupied the bigger space in the negotiating table. Even the use of courts and consequently suspended jail term that was later to be effected was part of the coercion tactics. Instead of settling for a fair deal, state as a partner in the crisis walked in with iron fist.

Kenyans have not only been denied right to healthcare which is why governments are elected but also quality healthcare. It is for this reason that the doctors pushed for its realization. The doctors will go down history records as one of the well organised and honest of all times that draconian and uncouth Moi era tactics implemented couldn’t break. The doctors strike been metamorphic to a never imagined movement.

The strike has opened many eyes, and in line, the doctors have exposed the government’s unwillingness to restructure the public healthcare. Treasury CS, Rich is on record saying the CBA can’t be implemented as it would kill the private investors. Any rational system will prioritize the public interests first. In a nutshell, the private sector (most hospitals owned directly or proxies by politicians) is running the script and blocking all advances made towards breaking this standoff.

The strike has woken up the sleeping middle-class and got it talking. A good number of online sentiments pointing fingers at the government asking the vital and rightful questions. It has sparked a revolution that is so much needed a revolution of citizenry involvement in scrutinizing policies.

The ugly scenes witnessed at Railways where rioting police officers armed to the teeth with best of the armoury, stormed and disrupted a meeting convened by the doctors after their colleagues were jailed. The incident again is a blessing as it exposed the government’s police intimidation to the world, it broadcasted apparent oppression to the world. Moving to disrupt a harmless and unarmed doctors gathering was a new low to the Jubilee administration.

It exposed much the lack of touch with the ground and blindness to the moods. While the country was raging with fire over locking up of doctors they went ahead rubbing salt on the wound with the storming of doctors gathering. A clear manifest of insensitivity and muscle flexing broadcasted.

The jailing of doctors has exposed the double standards and inequality in the justice system. While doctors were jailed for court contempt, PS Kibicho is a free man despite being sentenced to a three-month civil jail over the same sin as doctors. This is just an example of many. The statement no one is above the law has been disapproved. We can clearly see segmental justice system where the big men are allowed to flaw laws while the small people are dealt with mercilessly.

The jailing of doctors is a big stride towards realizing standard public healthcare system. The officials refused to be boxed to accepting personalized deals. Accepting the jail fete, they made a resolution that pursuit of CBA full implementation is unstoppable. After completion of jail term, the government will have lost a negotiation leverage which is jail threats; talks will back to square one. They’ll come out psychologically healthy and pumped up the ever. A fair deal will be struck.

The jailing of doctors pushing for better healthcare while those who loot from public coffers are left free has also exposed the nature of the government and its levels of honesty in fighting societal menaces. The attitude shown is excellent in influencing voters decision as August polls fast approaches. Jubilee will be remembered for long in history as the government that jailed innocent doctors who armed no one but fought for the better health state.

Jailing Doctors has sparked consequential political conversations apparently not massaging to the government. You’ll see more defiant strikes coming in the next days. Doctors have set a precedence. Tactical strikes management. Traditional coercion tactics will never see the day. The government unsuccessfully tried to control the narrative by buying out the mainstream media and using their internet mercenaries to push their agenda. Everything blew off and CBA resolve sparked a moving conversation and swaying allegiances.

Deputy President William Ruto Is A Man Fighting For His Life

It’s About Time, From Trump To Africa