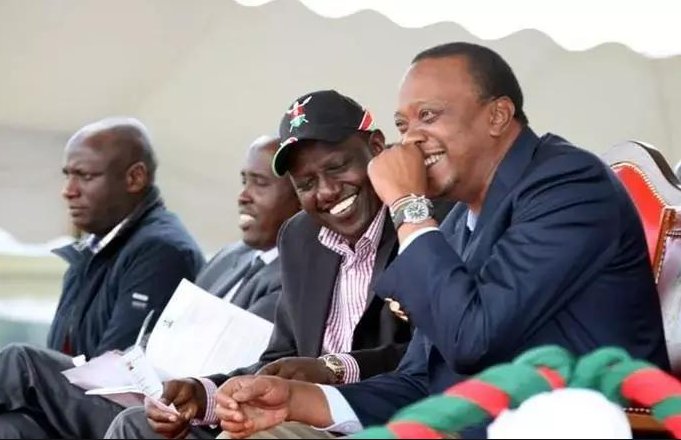 President Uhuru and DP Ruto at a public function

In less than 30 days, Kenyans will head to the ballot to elect their 5th president. While Uhuru is determined to retain his seat by hook and crook and I quote his deputy Ruto on that, opposition and NASA candidate Raila Odinga is all fired up to ensure his last bullet catapults him to the big office.

So much is going on the country from strategic terror attacks in the NEP that have led to the declaration of a state of emergency in most parts to the death of Security CS Joseph Nkaissery whose death has been it key questions but as expected the government pathologists have ruled out foul play after the autopsy. We have an IEBC that has not only lost the cause of a fair referee but left their partisanship card too open. From a fraud voter register that they’ve refused to publish regardless of law requirements to nuisance appealing and re-appealing of ballot printing tender to Al Ghurair. Makes you wonder what it is about this company that everything doesn’t move unless the tender is awarded to them, from the looks, you can bet it isn’t anything good.

Jubilee politicians have hatched a clever campaign targeting the judiciary in the past few days. The onslaught plan that was struck by the President and his deputy accusing the judiciary of colluding with NASA to derail the election. The accusations are baseless and hot air. For a time now, we’ve had a public perception of current CJ David Maraga having his allegiance to the executive. In a recent tour to his natives in Kisii, President reiterated that Maraga was a political appointee and a gift to the locals from Jubilee. Expectedly, the CJ denounced but it gave a hint of the executive influence on the judiciary. Jubilee has been having their way in parliament and even during the elections dispute referred opposition to the judiciary so the courts they trusted are overnight the devil. The whole hullabaloo is to change the public perception that executive is influencing the judiciary.

Being an election period, the judiciary is going to play a critical role as far as peace is concerned and Jubilee knows this, why they’re taking a step ahead. The strategy which also is to capture international headlines is to show the judiciary is sympathetic to the opposition and in quicker coordinated rejoinder, the CJ and law defenders come out to castigate and assure I the judicial independence. Now, what’s the catch, should there be an electoral dispute which from the body languages; inevitable, the advantaged Jubilee will urge NASA to go to the courts that have all along been advantageous to them. Having prepared the public court that judiciary is pro-opposition, Jubilee hopes the situation and pressure locally and internationally, will coerce NASA into a legal arbitration.

NASA has vowed not to take judicial pathway knowing well and with the 2013 petition that nothing will happen in their favor going on with their plan of a clean win in the ballot. So the attack on the judiciary is a bait.

The coordinated war that you’ll see legal minds in Jubilee camp come out attacking the judiciary, the party’s Sec Gen Tuju went further with Duale to ethnically profile Judge Odunga’s ties of consanguinity to James Orengo, I could not help but laugh. I remembered that Jubilee is good at one thing: Public Relations. Having discovered that they keep losing cases in court, they decided that the best way of defending themselves in the face of dwindling rigging fortunes is to intensify attacks on Nasa and the Judiciary in the public court.

With the media in their deep euro bonded pockets, they are strategically resolved to change the national discourse on pertinent issues of elections’ credibility to sideshows about the fidelity of the Judiciary and its esteemed employees. Despite people like Murkomen boasting about being legal brains and festooning their Facebook posts with all their supposed legal titles; their scarcity in our courts to task their legal brains on serious national issues of a legal nature has been palpably apparent to even a disinterested mwananchi.

They have thrived in the theater of the absurd that is political rallies and social media. Jubilee’s strategy is to hoodwink the public that the courts are favoring Nasa. In their strategy, they quote no constitution but only belabor to trace the DNA of all the judges that have made a ruling in any case involving Nasa and link them to a Nasa luminary. It’s absurd but not vain!

The other strategy is a relentless PR campaign on the date of elections and useless peace campaigns at the expense of free, fair and credible elections. Despite the fact that NASA has NEVER mentioned or shown any verifiable intention to have the elections held post-August 8th, Jubilee has amplified their misguided rallying call that they will not accept the elections to be postponed.

This is despite the fact that the Constitution is clear about the date of elections and the fact that only parliament or a referendum can change that. While at it, they have not based their claims on the Constitution. They have just regurgitated platitudes of these wild allegations in rallies and syndicated tv shows using compromised journalists and political pundits with the hope that eventually they will shape national discourse with these issues that are at best unnecessary.

Related Content:  Dan Okwiri: My Memoirs In The Kenya Airways Doula Crash In 2007

But their efforts are not vain. They are diversionary tactics that deflect national discourse from pertinent issues of having a Free, Fair and Credible election. They ensure Nasa is too busy to talk about issues like a compromised voter register or ballot printers and issues like the composition of IEBC officials who will conduct the elections.

The strategy is well coordinated and it’s executed from the party leader and Jubilee candidate to the most unpopular Jubilee MCA aspirant at the ward level. Money is used to bribe journalists and political analysts to amplify the message and fire is put under the feet of the 36bloggers to overwhelm social media with these diversionary campaigns.

NASA must not fall for all these diversionary tactics excavated from a PR manual. NASA must continue piling pressure on IEBC to follow the law and ensure all loopholes of election rigging are sealed. Nasa must also stay on it’s message and remind Kenyans that Jubilee has failed in all social, political and economic spheres.

Even those on social media must pay little attention to the nonsense like that of Tuju claiming judges are related to NASA luminaries. Let us keep our eyes on the ball. Let me say what I keep saying: Never underestimate the resolve of the mafias to keep or acquire power. They will kill all of you if they have to.