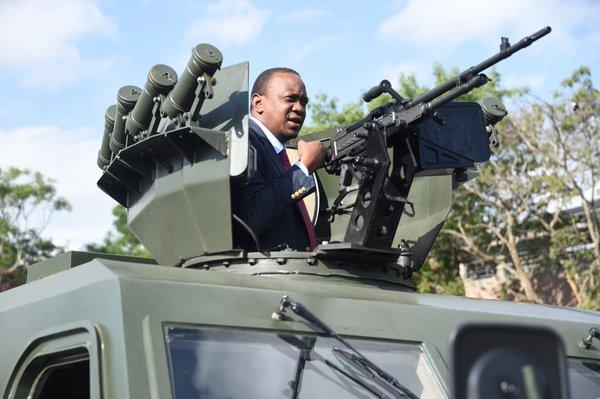 Months after they were acquired, there has been not a single mission of successful deployment of the VN-4s to report. Key components, including shock absorbers and air conditioning, don’t work. Kenyan officers have misgivings about them; they do not even know how to operate them properly, let alone maintain them. Almost all have been parked since they were commissioned

They were supposed to be the machines that made the difference in the war against terror in the Kenyan story; the ones to turn cops into heroes, and the bad guys into, well, not heroes. But the chronicle of the 30 armoured personnel carriers (APCs) purchased by the Kenya government, in a shroud of secrecy, from China is one that speaks of wanton waste and abundant ineptitude.

At the commissioning of the APCs in February this year, President Uhuru Kenyatta was evidently excited. He extolled the “important milestone” that his administration had attained, in its mission to modernisation the police service. It was, he said, one thing his government had done differently from its predecessors in decades, which would give the cops that much-needed boost in the fight against terrorism, banditry and other forms of crime.

The cost of the APCs was never publically disclosed – no police or military purchase ever is – but they are believed to cost less than US-manufactured ones, which go for close to $1.2 million (Sh120 million) per unit. Available information indicates that Kenya was the second country to acquire the VN-4 APCs, manufactured by China North Industries Corporation (NORINCO) Group.

The only other country known to have the same hardware is the Venezuelan National Guard, under the repressive regime of President Nicolás Maduro. The vehicle’s armour is welded shut and primarily provides protection from small arms fire and splinters from explosives. According to armyrecognition.com, the VN-4 is fitted with an open-roof, and a small turret mounted at the front top hull, armed with a 12.7mm heavy machine gun. Three smoke grenade dischargers are mounted on each side of the turret. It has a top speed of 115 km/h and efficient range of 700 kilometres.

The Nairobi Law Monthly’s investigations have returned a damning verdict, which points to a mega scandal within the Presidency, specifically the Ministry of Interior and Coordination of National Government – the same ministry has previously been accused of appropriating billions of shillings in the space of days in inexplicable expenses; the journalist who reported the story was later arrested for ‘questioning’, and was only released after a public outcry

By the time the APCs landed at the port of Mombasa from China, they had not been tested locally; neither had Kenyan police officers, who were to be the primary users, undergone any form of training on how to use or maintain them.

Don’t miss out to get your copy of the August release of Nairobi Law Monthly when they hit the streets the first week of August and get the finer details of what would be one of the biggest scandals to ever hit Jubilee government after Eurobond and NYS scandal.

Related Content:  Third Force Politics, Illusion That Stands Zero Chance In Kenyan Space
Kenya Insights allows guest blogging, if you want to be published on Kenya’s most authoritative and accurate blog, have an expose, news TIPS, story angles, human interest stories, drop us an email on [email protected] or via Telegram
Related Topics:DevelopmentInvestigationsPoliceSecurityUhuru Kenyatta
Up Next

Steven Githaiga The TARDA Fraud MD Who Changed His Birth Dates To Serve Longer, Employed Whole Family and Friends In The Parastatal(Part 1 Of 20)