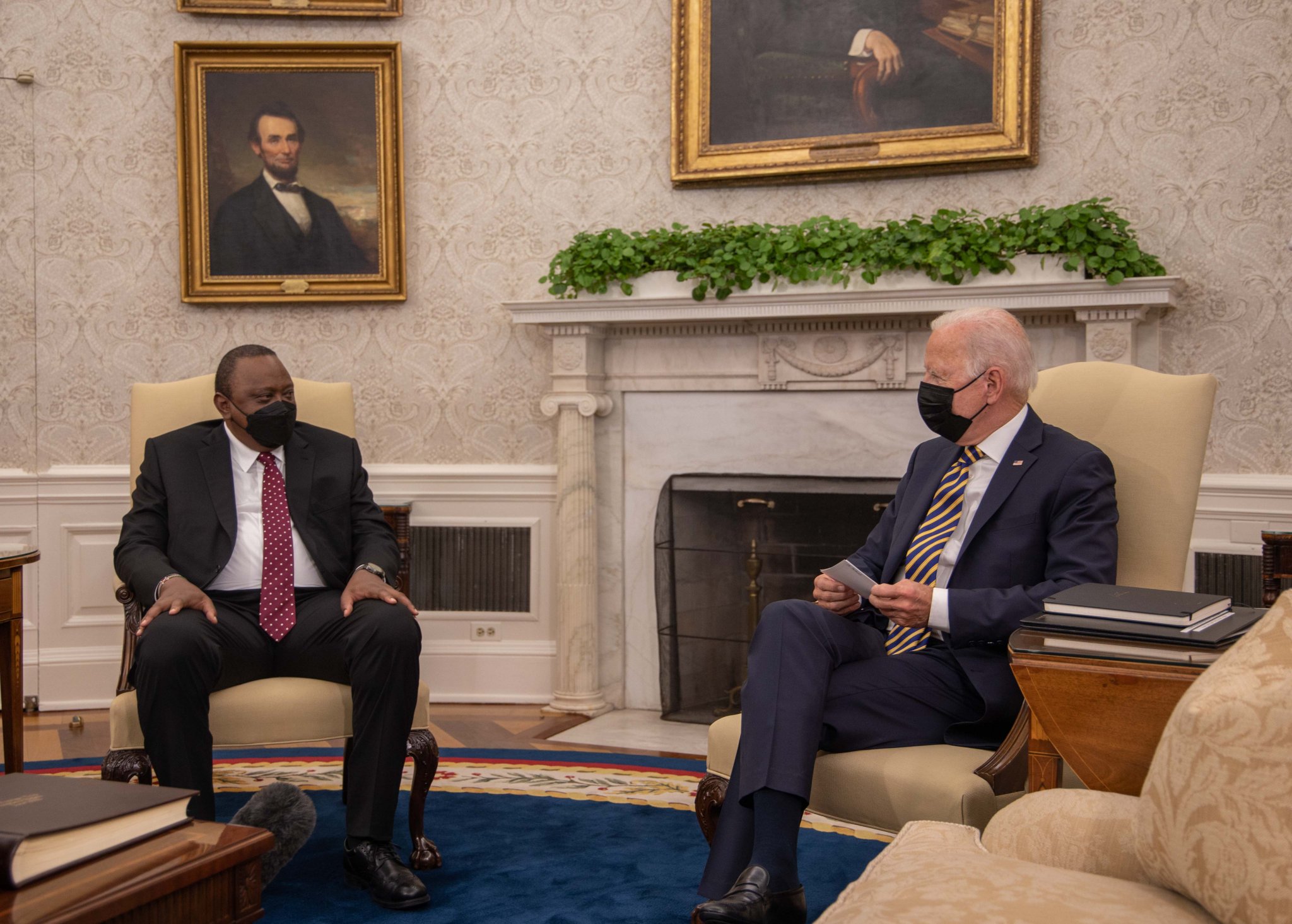 Meeting at the White House, Biden and the Kenyan president promised to work together on climate change and ending violence on the Horn of Africa, although there appeared to be no headway on Kenya’s hopes on a trade deal.

Biden announced that the United States would immediately donate another 17 million doses of the single-shot Johnson & Johnson vaccine to the African Union, on top of 50 million doses already sent.

“As a continent we are lagging well behind the rest of the world in terms of being able to vaccinate our people,” Kenyatta told Biden in the Oval Office.

“So any additional support like the president just mentioned is greatly welcomed and we look forward to that continued partnership,” he said. 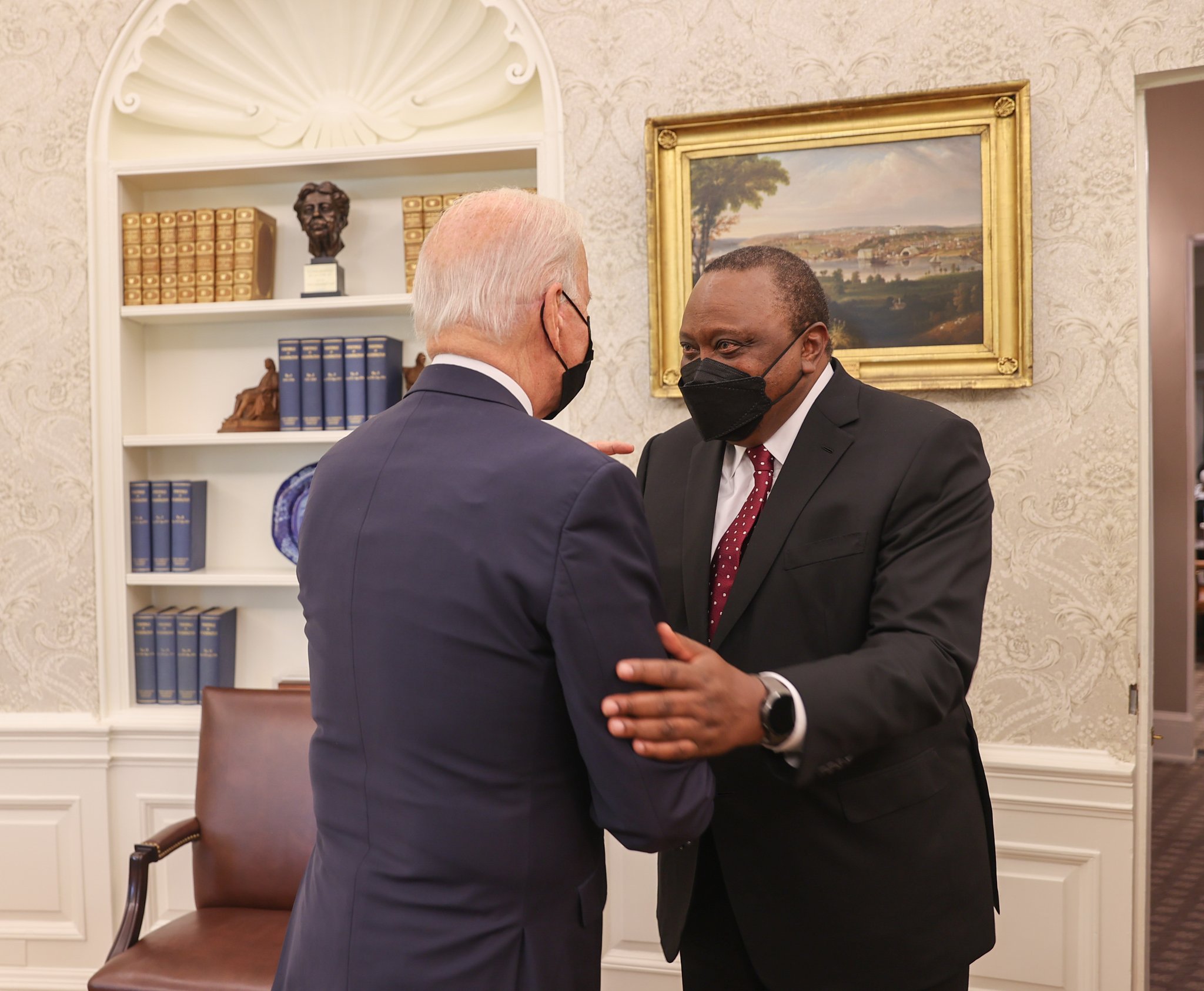 President Uhuru Kenyatta is received at the The White House in Washington DC by his American counterpart, President Joseph R. Biden, Jr.

Biden has vowed a leadership role for Washington on vaccines at a time that infections remain stubbornly high in parts of the United States where people refuse widely available shots.

Most of sub-Saharan Africa has vaccination rates in the single digits, at the mercy of foreign donations due to the lack of indigenous production and prohibitive costs of mass purchases.

Kenyatta is the first African leader to visit Biden’s White House amid a slowdown of travel and summits as a Covid-19 precaution.

“I’m committed to further elevating our ties with Kenya and nations across Africa as a whole. But Kenya is the key,” Biden said.

Biden has promised a new focus on democracy after the courting of autocratic leaders by his predecessor Donald Trump — who also made no secret of his lack of interest in Africa.

Long seen as a pillar of stability, Kenya was wracked by political violence including after 2017 elections but Kenyatta has since made peace with his once-bitter rival Raila Odinga.

Kenyatta, who has vowed to fight corruption, came days after the Pandora Papers investigation which found that Kenyatta, together with six family members, owned a network of 11 offshore companies, one valued at $30 million.

Biden did not address the allegations during the brief appearance before reporters but called for “strengthening financial transparency” and praised Kenyatta’s record.

“I want to thank you for your leadership in defending the peace, security and democratic instincts of the region and your country,” Biden said. “You’re doing a good job.”

Aligned on climate, shift on trade

Kenya is the current president of the UN Security Council and in that capacity as pushed to end fighting in neighbouring Ethiopia, where hundreds of thousands of people are facing extreme hunger.

Kenya is a longstanding US security partner, working closely in another neighbor, Somalia, in combatting Al-Shabaab jihadists.

Kenyatta said he was speaking to Biden about the “fight against terrorism” but also about climate change, ahead of a high-stakes UN conference in Glasgow next month.

“Our country, our continent is the least in terms of emitting but pays the highest price,” Kenyatta said, welcoming Biden’s commitment on climate change since taking over from Trump.

Kenyatta also made a pitch on trade. The Trump administration began talks with Kenya on a free-trade deal; little progress was made but Biden has shown scant sign even of restarting talks amid a growing domestic backlash against big-ticket accords.

Trade “is vital not only in terms of further entrenching American interests on the continent but also in helping us achieve our social-economic agenda,” Kenyatta said. 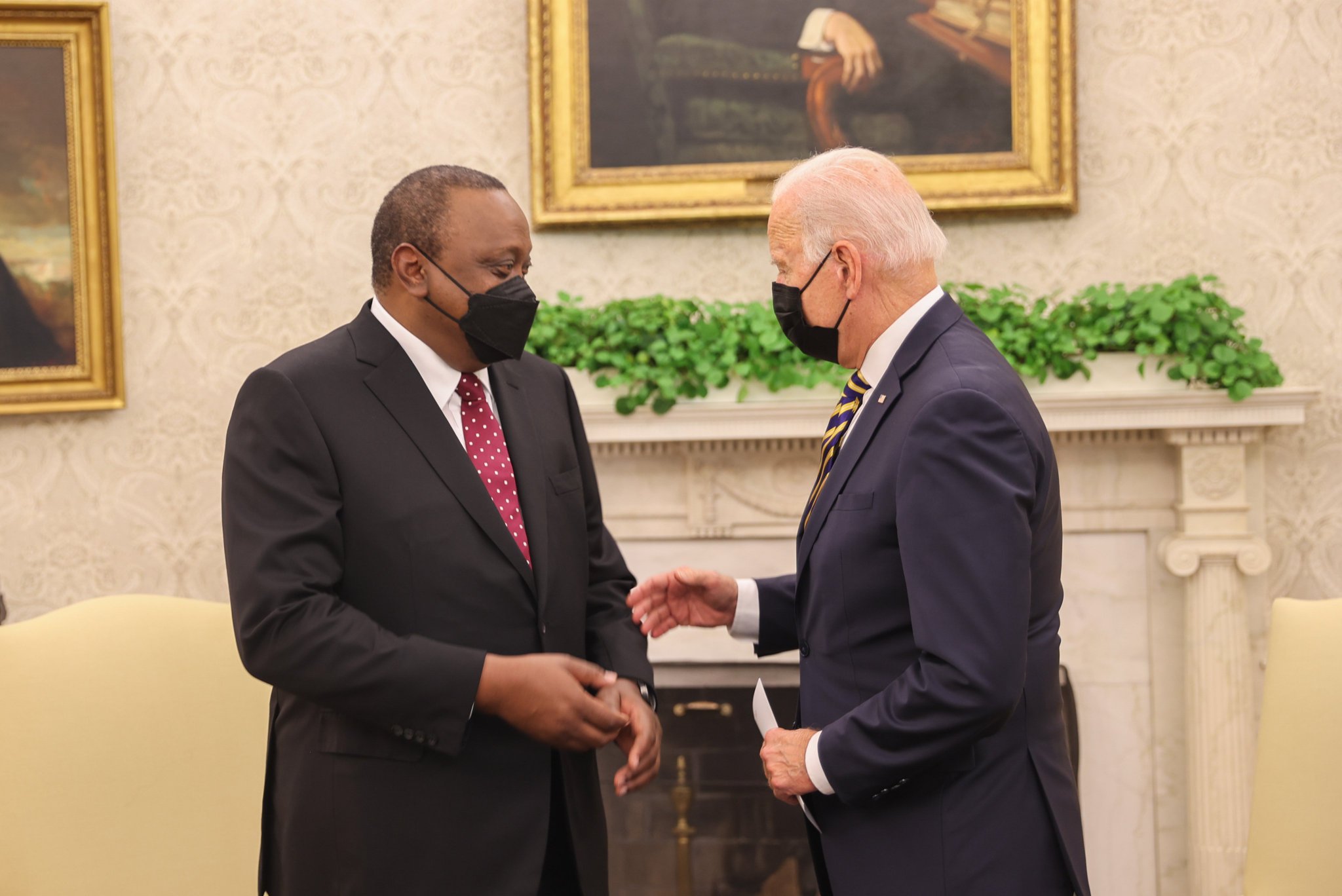 A senior US official, speaking on condition of anonymity, said the Biden administration would be “working closely” with Kenya on trade but acknowledged: “We are thinking through how we approach foreign trade.”

Kenya is worried as the landmark African Growth and Opportunity Act, which lets sub-Saharan nations with good governance export without duties to the vast US market, is set to expire in 2025.

Kenya Insights allows guest blogging, if you want to be published on Kenya’s most authoritative and accurate blog, have an expose, news TIPS, story angles, human interest stories, drop us an email on tips.kenyainsights@gmail.com or via Telegram
Related Topics:Joe BidenPresident Uhuru Kenyattawhite house
Up Next

What Biden And Uhuru Discussed In The White House Meeting