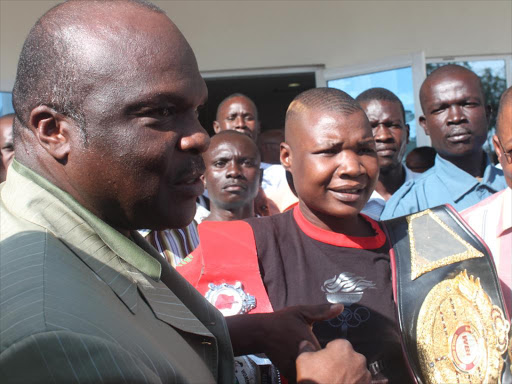 Businessman Sam Wakiaga with boxer Conjestina Achieng after she was discharged from Avenue Hospital in Kisumu on October 27, 2013.

Former Kiambu County Governor Ferdinand Waititu has been cleared by the Office of the Registrar of Political Parties to vie as an independent candidate for the Nairobi gubernatorial seat.

The Registrar cleared Waititu who was ousted as Governor in January 2020 after certifying his high mast and floodlight symbol, and that he does not belong to any registered political party.

Former Dagoretti South Member of Parliament Dennis Waweru and Agnes Kagure have also been given the green light to contest the Jubilee party primaries for Nairobi gubernatorial by-election.

Waweru and Kagure join a growing list of aspirants among them Canada-based lawyer Miguna Miguna who has been endorsed by the Thirdway Alliance Party to seek a stab at the seat following the impeachment of Mike Mbuvi Sonko.

All eyes are on IEBC if it will clear the former Kiambu county boss who has a graft case pending in court.

Dr. Aukot through his Twitter handle, termed Miguna’s endorsement as fake and a move engineered by rent-seekers within the party.

He said that the party never discussed his candidature as an agenda, further saying that few individuals within the party are misleading the exiled lawyer who is seeking to replace impeached Governor Mike Sonko.

Kenyans, don't be misled by rent seekers and merchants in our party. While I would love to have the NRM General @MigunaMiguna as our candidate, the party under my leadership never even discussed his candidature as an agenda. This is the work of rent seekers! pic.twitter.com/5TB3jf2rpt

Aukot was ousted by the Party in September due to what the National Executive Committee termed as financial impropriety, lack of civility, and transparency to party members, and failure to attend disciplinary hearings.

Independent candidates intending to participate in the poll had until Tuesday to submit their names and symbols that they intend to use during the by-election.