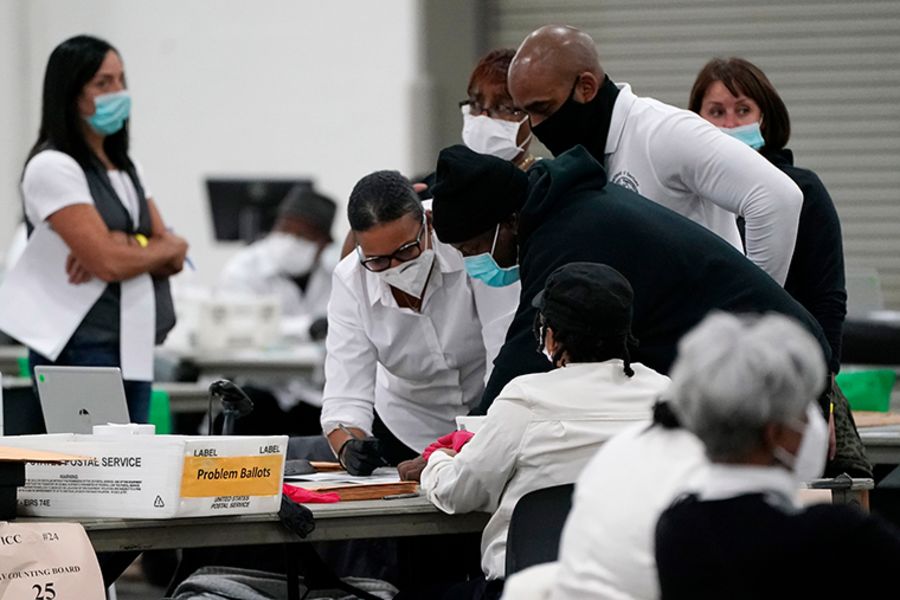 Election officials huddle around a table as absentee ballots are processed at the central counting board, Wednesday, November 4, in Detroit. Carlos Osorio/AP

Nearly 160 million Americans voted in the 2020 presidential elections, a record-high turnout in the last 120 years, according to elections data website US Elections Project.

A preliminary estimate by University of Florida professor Michael McDonald, who runs the site, recorded 159,817,000 votes.

“That is not a typo. The 2020 presidential election had the highest turnout rate in 120 years. There is still a fair amount of guesswork involving outstanding ballots to be counted. I will continue to refine these estimates over the coming weeks,” McDonald wrote.

In 2016, about 137.5 million Americans voted in the presidential election, according to data from the US Census Bureau.

While Trump has prematurely claimed victory, he remains behind Biden in the race to secure at least 270 Electoral College votes. The race remains competitive, however, with Biden leading 238-213, according to The Associated Press.

Kenya Insights allows guest blogging, if you want to be published on Kenya’s most authoritative and accurate blog, have an expose, news TIPS, story angles, human interest stories, drop us an email on [email protected] or via Telegram
Related Content:  President Uhuru Undermining The Supreme Law Of The Land To Punish DP Ruto?
Related Topics:
Up Next

Could US Election Be Decided In The Courts?