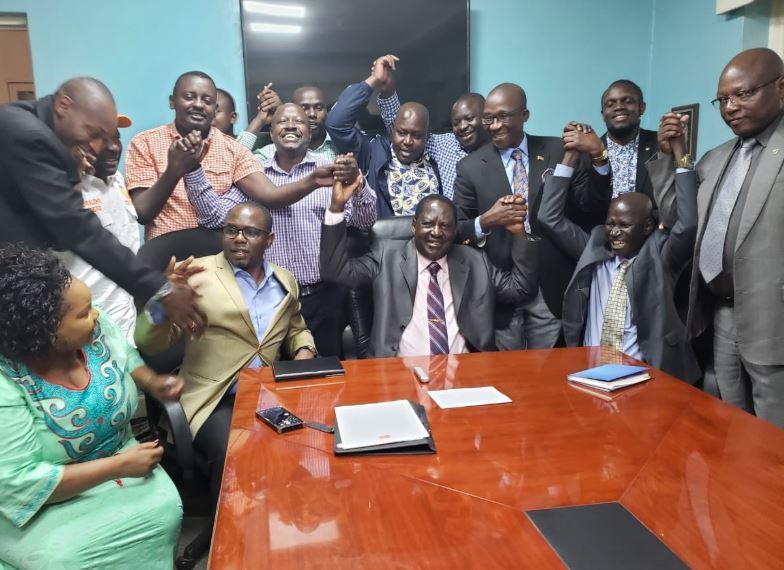 Reports reaching Kenya Insights state that the ODM Party leader and AU’s High Representative for Infrastructure Development in Africa Raila Odinga has refunded a total of sh 2.25 million nomination fees to nine aspirants that had paid to the party.

The Orange house was not at peace with frequent visits from the aspirants who, according to our sources, were forced to admit and accept the win of the late Ken Okoth’s brother Imran Okoth even after rogue party officials bungled primaries in Kibra.

Raila handed each of the aspirants Ksh 250,000 they had paid for the party primaries following revelations of how some top party officials orchestrated doctoring of the voters’ roll. The money was handed over on Monday following a closed-door meeting with party leader Raila Odinga.

The aspirants had a chance to deliberate with the party leaders over mishaps that took place during the party primaries and the party acknowledged that there were avoidable mistakes that occurred. It is during the meeting that Raila Odinga resolved to refund the Sh2.25 million the nine had paid to the party for the primaries.

Kisumu Woman Representative Rosa Buyu confirmed the reports of the nomination fee refunds today on a morning media talk show where she passionately defended the ODM party primaries in Kibra.

“ODM has been at the forefront, advocating for credible and fair party nominations. The ODM party has apologized to other aspirants in Kibra and has accepted to refund the KSh250,000 that they had each paid as nomination fee,” she stated.

Rasa Boyu also refuted claims that Raila Odinga was mad at what happened in Kibra and emphasized that the former premier was keen to encourage the aspirants to remain loyal to his party.

“Mr Odinga acknowledges that there were challenges in the nominations, with names missing from the voter register but those were not tailored or deliberately introduced to favour or disenfranchise any aspirant,” a statement sent to newsrooms on Monday read in part.

Kenya Insights allows guest blogging, if you want to be published on Kenya’s most authoritative and accurate blog, have an expose, news TIPS, story angles, human interest stories, drop us an email on [email protected] or via Telegram
Related Topics:AspirantsKibraNomination FeeODMRaila Odinga
Up Next