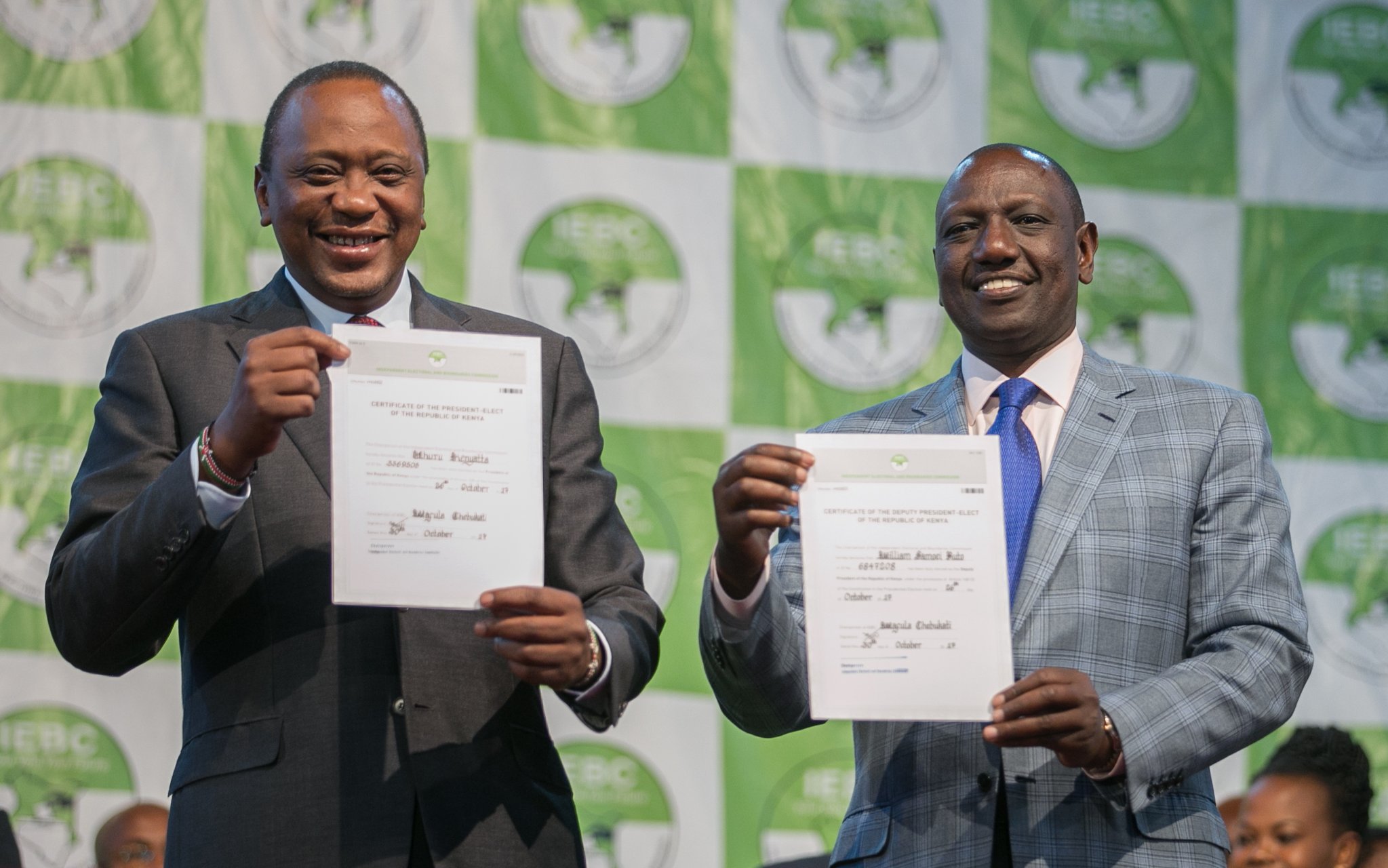 President Uhuru and DP Ruto after being declared the winners by IEBC Chairman Chebukati.

A week ago, Crisis Group warned against Kenya having elections given the divisive elements within the country but that was disregarded and we went ahead with the elections. International media joined in the voices calling for the poll delay to prevent violence breaking but yet again, nobody listened. Many Kenyans are exhausted by the extended election drama, one that already has damaged the economy and further polarised the country. But faced with two bad options – proceeding with a vote despite the boycott of a candidate who won some 45 percent of votes the last time around, or accepting a limited delay – the latter option was the better one. The IEBC should have sought a limited postponement to allow sufficient time to prepare for an election that both main parties contest. Kenya’s political leaders should have supported such an extension and commit to participate in a new vote. But all these now in the past.

Came 26th the election day, for the first time in election history, lines remained empty, clerks were idle, there was a general election boycott, according to figures given by IEBC that only 6.5M voted turned out, translated to about 70% of registered voters keep away from voting.

The situation was so bad that even in Jubilee’s strongholds, the queues weren’t as long and voter turnout way lower as compared to August poll. In fact, this low turn out was a referendum on the credibility of the October 26 election, in which the entire country said “no thanks”. That even the president’s own supporters wouldn’t participate underscores that Kenyans across the political divide did not think that the event was worth their time.

Certainly, the boycott was a big factor. The fact that Raila Odinga said he would not participate made the whole thing less competitive for supporters of both parties. For many voters, this election was a contest between Kenyatta and Odinga, and when Odinga withdrew, it was no longer a contest. Whereas NASA supporters likely stayed home because the party asked them to, Jubilee supporters probably stayed home because they didn’t think it was worth their time to stand in line for an election their candidate was guaranteed to win. Either way, that says that voters didn’t believe that the event that took place on Thursday was worth it.

Apathy also probably played a part. While outsiders have only just started paying attention to this story, Kenyans have been living with this election for nearly three years. There have been protests, reforms speeches, announcements and intrigues at the IEBC since 2015. It was inevitable after the August iteration was canceled that there would be a dip in participation in any new election because many Kenyans are simply ready for the whole process to be over.

Jubilee campaigned on a platform of getting 70+1 of the votes, they held glittering rallies, bought in all the losers from NASA to create a popularity nation. It has turned out they bought punctured tires as none of the defectors added any substantial effects on the results. However, politics is game of perception and they created a false popularity. What was meant to be an election turned out to be a referendum and if we’re to use the turnout then we can say about 70% do not only have confidence in the sitting government but the electoral process.

The Electoral process in Kenya for past two decades has been faced with dysfunctions, nearly all elections have been marred with rigging claims and contested. Actually, the credibility of the process is the reason NASA boycotted. Generally, Kenyans are tired of being taken for granted by having their voices muted with persistent rigging. This boycott was a strong message that the power of the vote must be regained and that Kenyans have matured democratically to be taken for granted.

Uhuru is set to be declared the winner despite resounding disapproval by the majority who kept off the poll, but this show won’t stop the Jubilee duo from going ahead with their onslaught. Many have suggested that given how the election was a flop, charade as described by the media, Uhuru should decline and seek a fresh mandate. I have no doubt that would ever happen, they won’t leave it. Right now IEBC is working around the clock to make sure numbers do tally and despite evidence of low voter turnout, Uhuru is set to hit his previous 8M mark, this has to happen regardless of everything working against it.

Judiciary, one if not the only standing institution that has Kenyans hopes, came under the full Jubilee wrath this week. The day Supreme Court was once again in focus to determine whether the set 26th election would go ahead of not in a petition filed before the court.

Justice Maraga would later give a demoralizing news that the court lacked a quorum to hear the petition as only two judges were present; him and Lenaola. The rest didn’t show up, Justice Njoki a said to have missed her flight back home, Justice Ibrahim who was now a two-time no-show was apparently away in hospital, Mwilu couldn’t make it following her driver’s shooting yesterday as for Justice Wanjala, Ojwang they couldn’t make it to court. Kenyans were treated to a well-choreographed set.

The shooting of DCJ Mwilu’s bodyguard was a clear warning to her and the rest of defiant judges who refuse to play the ball. Direct threats and intimidation were clearly put in play to instill fear on the judiciary and it worked. “Today, Kenya has witnessed judicial delinquency when the several judges of the Supreme Court abdicated their Constitutional Duties.” Apollo Mboya, a lawyer described the situation.

Nyabola Nanjala a political analyst, added her voice to the disappointment from the Supreme Court,
“Even if not a single tear gas canister is launched today, the circumstances of this lack of quorum have undone something important. I’m not worried about political violence in the vein of 2007. I’m worried about disenfranchising a population by institutional manipulation. The thing that keeps getting lost in the conversations about this election is that on Friday, August 11 the police went into opposition strongholds and indiscriminately opened fire on civilians. According to KNHCR, 25 people died. Local media at first refused to cover it.”

She continued, “Even the Kenya Red Cross gave a statement and said we were imagining it. But people were there and they lived it and they were scared. I spoke to some. They said that they didn’t feel like this Kenya was theirs anymore. They felt disposable. And no human should feel that. That September 1 ruling did more to heal Kenya than people realize because it made people feel heard. It brought them back in. So even if this ruling hadn’t gone in favor of NASA people would have been more likely to respect it because it feels fairer. That’s the point of law and of a judiciary – not that you win every case but that you feel heard. That’s the point of due process. Whichever judges chose not to show up today have done more to damage Kenyan democracy than they realize. And that makes me angry. Because democracy is like any other relationship – you have to show up. Disagree on whatever however you like but you have to show up. Why should Samantha pendo’s family believe in due process if the most senior judges in the country won’t show up? And Mercy Moraa? Imagine getting shot at, being told it didn’t happen and then having to hear a judge didn’t show up because they couldn’t find a flight.”
Here’s the thing, Kenya is greatly polarized and after the election, it is even worse, last evening ethnic clash between the Kikuyu and Luos, Luhyas and Kisiis erupted in Kawangware, this was a glimpse of the general situation. Uhuru will definitely get the presidency but he has lost the country. When about three-quarter of the country shows disapproval you don’t ram it lightly. Uhuru’s hope is Kenyans will get tired, accept and move on like I’m 2013 but this is 2017 Kenyans are more radicalized, in fact, the administration has made tactical blunders by using police force on Odinga supporters expecting bullets to silence them, this has worked in reverse to silence them.

Raila had a fanatic following, he’s a single figure with unexplainable influence, you don’t expect life to move on swiftly and government-run smoothly when over six million supporters of Odinga feel disenfranchised. If Uhuru looks beyond his personal gains and family rivalry with Raila and starts thinking like a leader then he must know despising Raila is the biggest mistake he’s making. Surrounded with a cultic following, making sound judgment is close to impossible. It is for these leaders to stop hard stances and close heads together.

A dialogue shouldn’t be necessarily about nusu mkate actually it will be a great betrayal to the process of Odinga negotiates for such an agreement. This course is and has always been about the credibility of the election process as that is the cradle land of chaos and also the independence of institutions six as IEBC and judiciary. A close table meeting should address this issue and Kenya hold a fresh election. We can, however, bury heads in the sand, move on with all these stains until everything explodes. It is at a point a Uhuru chooses himself or the country. The world is watching. He can restore the democracy that has seen Kenya Kenya an outstanding country in Africa or turn it into anarchy as it seems and let the monkeys dance.

Evidently, the country is turn right in the middle, guns and bombs might bring silence but not peace it for this reason that we must put the fire off while we still can or play ostrich and watch the whole building engulfed