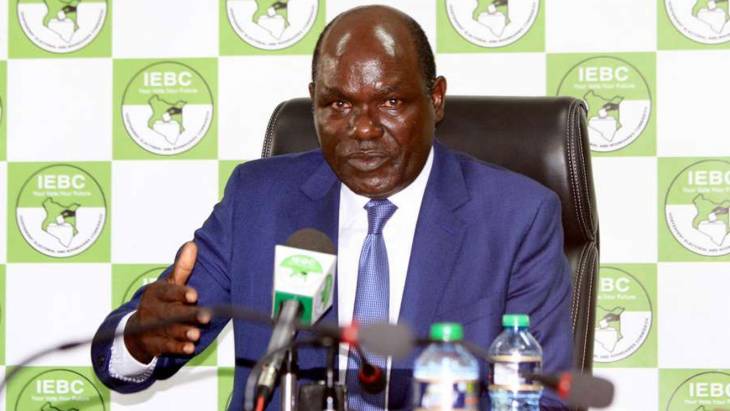 The electoral commission has suffered a blow in its preparations for the 2022 elections after a tribunal blocked it from awarding the contract for the supply and delivery of ballot papers and election result forms.The Public Procurement Administrative Review Board issued the notice after Shailesh Patel T/A Africa Infrastructure Development Company made an application for a review on how the tender was awarded to a Greek firm. This month, the electoral agency had awarded Inform Lykos (HELLAS) S.A the tender after it beat twelve firms to emerge as the lowest bidder.“Under section 168 of the Public Procurement and Asset Disposal Act 2015, the procurement proceedings are hereby suspended and no contract shall be signed between the procuring entity and the tenderer awarded the contract unless the Appeal has been finalised,” read the orders.In the application to the board, the complainant claimed the award to Inform Lykos was unlawful and did not meet requirements of the Public Procurement and Asset Disposal Act.According to the applicant, the respondents, listed as the Accounting Chief Executive Officer of IEBC, IEBC and Inform Lykos, contravened Article 227 (1) of the Constitution by conducting the procurement in a manner that was unfair and uncompetitive.Africa Infrastructure Development says the respondents provided a grossly restrictive qualification and evaluation criteria in the tender documents, which comprised mandatory requirements to be met by all bidders. The applicant also contends that the respondents contravened section 60 (10) of the public procurement law by failing to prepare clear and specific requirements relating to 40 per cent local content in the tender.The applicant argues that the respondents failed to give a correct and complete description of application of the 40 per cent local content and that allows for fair and open competition among those who may wish to participate in the procurement proceedings.“The respondents have contravened section 67 (1) (d) of the Public Procurement and Asset Disposal Act by disclosing the contents of unsuccessful bidders’ tenders to third party bidders through the letters of notification dated October 14, 2021,” the applicants argued.Further, the applicant is aggrieved by the respondents’ failure to comply with the obligations under procurement law and the Constitution. Inform Lykos is located in Koropi, Greece and is part of the Printing and Related Support Activities Industry.It has 170 employees at this location and generates $33.41 million in sales. There are 17 companies in the INFORM LYKOS (HELLAS) S.A. corporate family.In 2017, IEBC picked Dubai-based Al Ghurair Printing for the lucrative deal, a move that saw several cases filed in court almost threatening to derail the election.The tender is titled: Supply and Delivery of Ballot Papers; Register of Voters; Statutory Election Result Declaration Forms to be used at the Polling Station; Election and Referendum Result Declaration Forms to be used at the Constituency, County and National Tallying Centre.The commission led by Wafula Chebukati, following an evaluation process, settled on Greece-based Inform Lykos (HELLAS) S.A at 7,172,850 Euros (about Sh925 million) at the exchange rate of Sh129.Inform Lykos (HELLAS) S.A trounced twelve other firms to emerge as the lowest evaluated bidder.Other bidders were Dubai-based Al Ghurair Printing that was controversially awarded the same tender for the 2017 General Election.