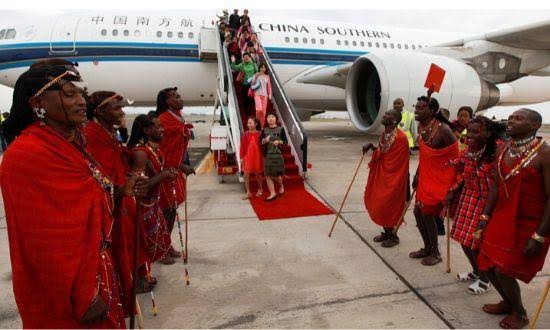 Amid high tensions over the spread of the Corona virus around the world, Kenya still continues to allow inbound flights from China the country where the virus was first recorded. There has been an uproar over Flight CZ 6043 which landed at JKIA yesterday from China amid claims that flights had been halted. Kenya Insights has now learnt that there have been three airlines operating the China – Kenya route in secret.

China Southern Airlines, which only two weeks ago released a statement that it had stopped direct flights from Guangzhou to Nairobi, has been actually been flying all along. It took medical officials at the airport who refused to screen passengers of Flight CZ 6043 for Kenyans to know about the lie. The Chinese Embassy then covered it up by saying there was a brief suspension of flights from Guangzhou which has now been reduced to one flight a week up until 25th March 2020.

Ethiopian Airlines is another airline plying the  Guangzhou to Nairobi via Addis Ababa route five times a week.

China Eastern also flies three times a week into the country from Guangzhou via Bangkok.

Kenya Airways has retained its Bangkok-Nairobi route but halted flights from Nairobi-Guangzhou route via Bangkok in January, a decision the cash-strapped airline says has hurt a lot. On Monday, the airline said it had lost Sh800 million in revenue.

By last evening, about 2,770 people had been reported dead worldwide from the virus, greed and the yearn for more money has however seen senior officials only think about the losses the airlines will make and not the lives of 47 million Kenyans.