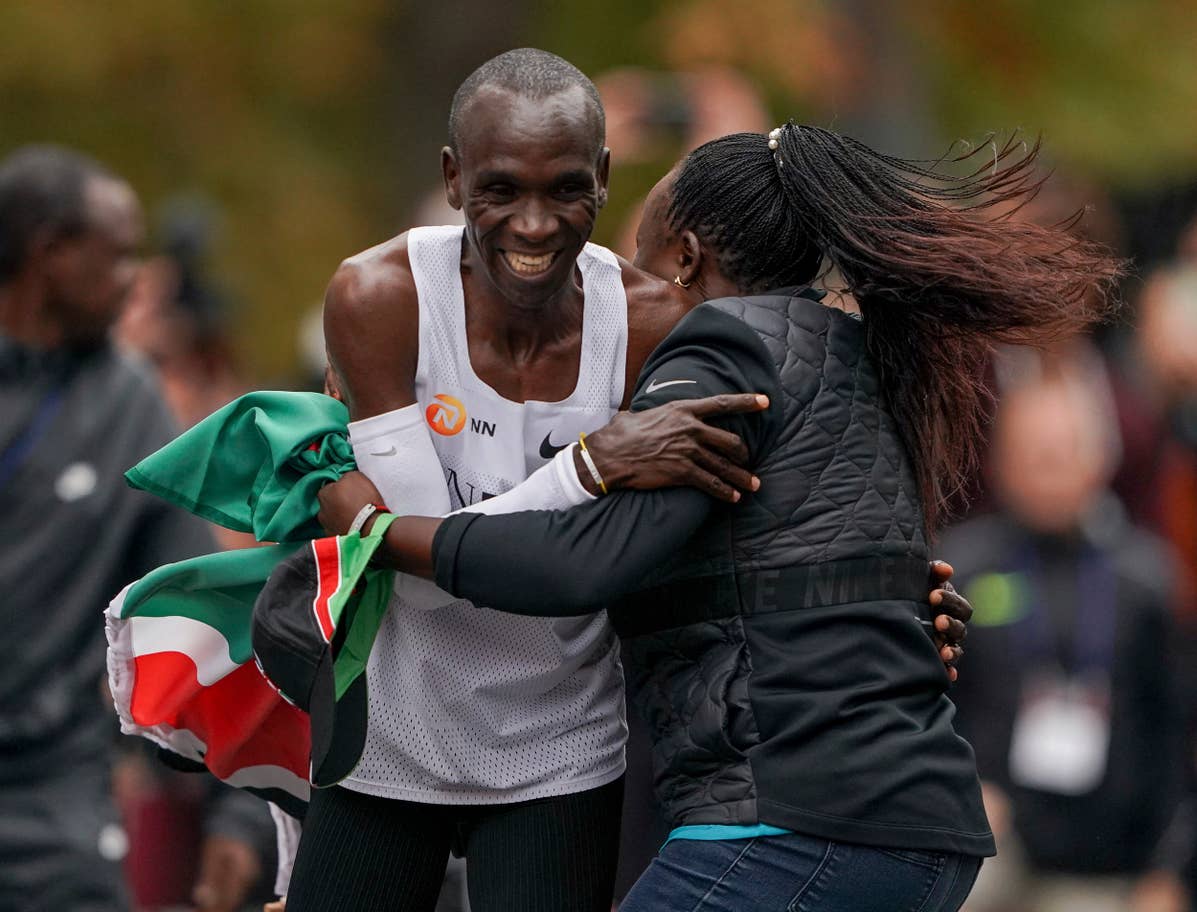 Eliud Kipchoge hugs his wife at the finishing line.

He dared to dream and achieved what will go down the history book as the first human to have ever run a marathon under 2 hours.

Congratulatory messages have been flowing and below are some from leading personalities and organizations all over the world:

Simply amazing! Congratulations @EliudKipchoge, #Kenya and #Africa. As you said, running and other forms of physical activity can help to prevent many diseases. #NoHumanIsLimited https://t.co/M5vu8XO5SB

Eliud already has a double page spread in the #GWR2020 book – looks like he'll need pride of place in next year's edition too! 👏 pic.twitter.com/IA5JROzO3v

For so long, so many thought it was impossible, but @EliudKipchoge becomes the first human to run a sub two-hour marathon.
#INEOS159 #NoHumanIsLimited pic.twitter.com/ONL9jyPR0n

HE. HAS. DONE. IT.@EliudKipchoge is the first human to run a marathon in less than two hours!

This is the stuff of history @EliudKipchoge. You captured the imagination of the whole world before this great feat and it will continue for a long time. Congratulations on becoming the first human to run a sub 2 hour marathon. 🇰🇪 is greater because of you! #INEOS159 pic.twitter.com/yUv0HI39CE

Get on a running machine and set it at 2.50 mins per km. Put in on ‘20’ setting. Any regular human will last seconds if able to get up to that speed at all. #Kipchoge https://t.co/GnjwYfKJl8

History is made by mavericks: those who dream dreams that scare them and others, those who live their dreams effortlessly. Congratulations Eliud Kipchoge. You set the pace, we follow; the only man who has united Kenyans for once. You are the limited edition. #NoHumanIsLimited

“I run to prove to any human in this universe that there are no limitations.” @EliudKipchoge

On behalf of the government, the Ministry congratulates and highly commends Eliud Kipchoge for this outstanding performance. We assure Kenyans that an appropriate consideration or reward will be extended to Kipchoge for inspiring other athletes to break existing standards.

That's an average of 100m every 17 seconds, for the whole distance.

What the actual f*ck. pic.twitter.com/svX2LRmhCs

Impossible IS NOTHING. Eliud Kipchoge has proven that. Congratulations for running against time and beating time. You were so fast you broke time. Never tell a determined, focused person that "it's impossible". Eliud is a testimony to #NoHumanIsLimited #Eliud159 #INEOS159 pic.twitter.com/4u2X8b1x4c

There’s always something about the Marathon that makes me emotional but I’ve never felt it as strongly as that. Congratulations Eliud Kipchoge “no human is limited”

A blistering 1.59.40! Congratulations @EliudKipchoge for the historic achievement in shattering the sub-two-hour barrier for the marathon; you are arguably the greatest runner of all time. #NoHumanIsLimited #INEOS159 pic.twitter.com/2Pmjo1yjX2

Congratulations @EliudKipchoge!
At a young age you’ve made history by setting an incredible world record of 1.59.40 proving that #NoHumanIsLimited.

We had no doubt in your abilities. You have made us so proud. Keep soaring. 🇰🇪 #INEOS159 #Eliud159 #AskKirubi

Hongera to @EliudKipchoge and the impeccable team of pacers for beating the two hour mark completing a full marathon in under 2 hours (1:59:40)! A true realization of #NoHumanIsLimited! pic.twitter.com/3poRev9qY8

HISTORY IS MADE! Congratulations 👏 from all of us @UnKenya, @EliudKipchoge being first ever human being to run a sub two-hour marathon. We are proud that @UN Kenya 🇰🇪 Person of the Year 2018 has defined the spirit of man’s limitless potential. #NoHumanIsLimited#Eliud159 pic.twitter.com/YyL8VJl85Q

This @EliudKipchoge has “bad manners”. On the 2nd try in the 2nd year, he becomes the first human to run a sub 2 -hour marathon at the#INEOS159 challenge. Doesn’t he know that in our Africa 5 presidents have been trying for nearly 30 years+ to “develop” their countries? pic.twitter.com/qCmpuIW1wh

Message to Kenyan politicians- Now use the #NoHumanIsLimited in a positive way. Bankrupting the country sub 1 decade does not count!

Kenya Insights allows guest blogging, if you want to be published on Kenya’s most authoritative and accurate blog, have an expose, news, story angles, human interest stories, drop us an email on tips.kenyainsights@gmail.com or via Telegram
Related Content:  Living A Lavish Life, Murdered Rongo University Student Sharon Otieno Was Pregnant With Migori Governor Obado’s Kid And Had An Affair With His Son
Related Topics:
Up Next

Patrick Sang, The Man Behind The Legend That Is Eliud Kipchoge