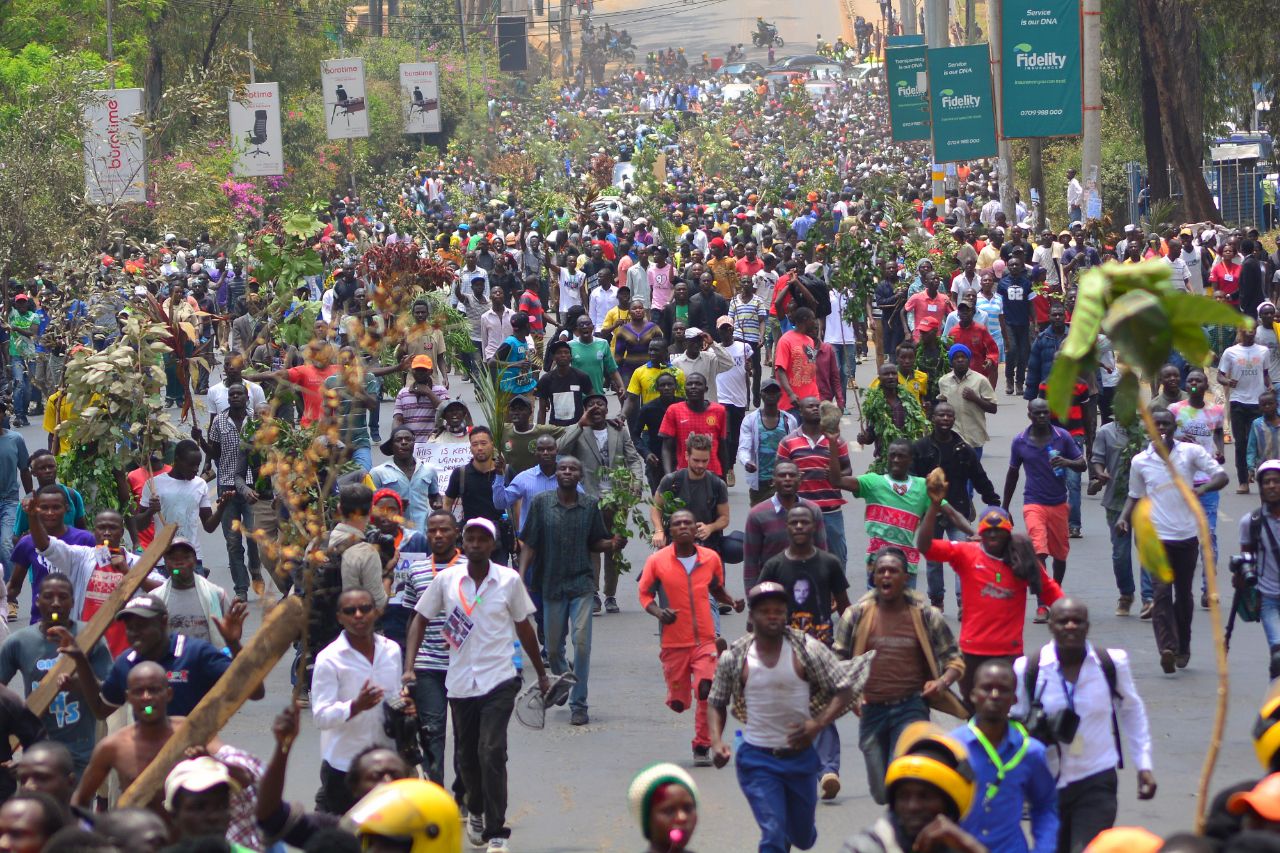 Thousands of opposition supporters hits the streets on anti IEBC demos, leaders have announced daily protests next week throughout the country.

We’re in a political crisis not a legal one, in spite of what the talking heads are saying.

The Legal Position: In spite of language in the 2013 Raila Odinga petition that suggested that the withdrawal of a candidate at this stage of an election could lead to fresh nominations I think that on balance the better view is that the IEBC will now treat this as an uncontested election and proceed to declare Uhuru elected unopposed. (The issue of fresh nomination was not an issue in that petition so, strictly speaking, what the court said then is not binding). There is, of course, the decision of the high court- still awaited- in the Ekuru Aukot case -challenging the anointing of Uhuru and Raila as the only candidates eligible to run on the 26th of October, 2017). This could still lead to other candidates being allowed to compete. God knows President Kenyatta now desperately needs this to go Ekuru’s way to give a bland simulacrum of formal legitimacy to what surely is a political curve-ball, irrespective of what Jubilee insiders might now say.

The Coming Institutional Decline: This brings me to the real issue. In my view, this is no longer a legal issue. In fact, further involvement by the court in this issue- whichever way- is not likely to resolve the underlying political problem.

As I see it what we have here is continuing institutional decline of a state which, over time, has become a pure instrument of political struggle and vehicle for pursuing elite interest. If you win power in Kenya, you can bend the law and the economy to your personal interest. This seemed to have changed somewhat under Kibaki but the state as instrument of the ruling power is back with a vengeance.

What we are seeing now is a country on the verge of becoming a ‘warlord democracy,’ a country in which who gets into office will be determined through violence – whether official violence or chaos by private militia and gangs- even though such violence will be marketed publicly in the name of the people. The economy has already been ‘criminalised’ and is bent to those in power and their cronies: as I said elsewhere Kenya is a contractor democracy in which commercial transactions are both personalized and clandestine, defeating all the theories of an open market. (Think- if you doubt our criminal economy- of the runaway corruption, open money laundering and wanton budget raiding at both the national and county level etc). The politics has, so far, been straddling between the lawful ( Sometimes we see compliance with rules and obedience to court decisions) and the unlawful (There is still open vote buying; the opponents are sometimes murdered- especially at lower levels and the hiring of gangs to break the knee-caps of the recalcitrant or the deployment of riot police in non-cmplianct regions).

In the next phase of this dangerous but evolving game, there will be even less pretence that we are playing normal politics. We shall have the unholy trinity of a) criminalized economy; b) warlord politics and c) a deeply polarized civil society (with some in the marginal areas heavily armed with guns smuggled from regional conflicts). From an economic perspective, the immediate risk is both domestic and external. Domestically, the contraction of economic activity will weaken government revenues, increase unemployment- especially youth unemployment- and ratchet up social stress, all destabilizing factors. Externally, as the government continues to clobber its opponents even as its revenues shrink, our sovereign rating will be further down-graded, making the interest payments on our growing external debt even more burdensome. Sooner than later we shall be talking to all the guys we hate talking to so much: our creditors, the IMF, the World Bank and other members of that usual gang.

The Limits of Law: Will the NASA boycott work though? As a general matter, I believe, that we lawyers are all too often seduced by our faith in the ability of law to solve social and political problems. Behind every constitution, I like to warn myself, is a fundamental moral principle, the commitment that a constitution will always be obeyed even – especially, I should say- when such obedience hurts our vital political interests. Judge Learned Hand once said that if liberty dies in the hearts of men and women neither the Constitution nor the Supreme Court can save it. Our problem right now is that our commitment to legal instrumentalism leaves us stranded on the horns of a cruel dilemma. We have an elaborate constitution but few citizens and leaders are committed to its robust enforcement. In fact, all the social media lawyer blathering by partisans of either side that “the law is clear” are just fig-leafs that mask competing power claims that have slender constitutional legitimacy. A heightening of the heat not a shedding of the light on the problem, if you see what I mean.

A boycott can lead to 1) a terminal political crisis for the incumbents (as happened in Bangladesh in 1996); 2) no immediate effect on incumbents but a destruction of the opposition (as happened with Blaise Campaore in Burkina Faso in 1991 and Gnassingbe Eyadema in Togo in 1993); 3) a broader constitutional crisis- (as happened in Thailand in 2006- though this was a boycott of the announced election results. The elections were declared invalid by the constitutional court. This led to the resignation of the Electoral Commission with some Commissioners being later jailed for illegalities. A fresh election was then held at the end of that year, 2006).

The second part of outcome 2 – the destruction of the opposition- does not seem likely in Kenya. Elections in Kenya tend to be like an ethnic census. I don’t see NASA’s core support dissipating or crossing over to Jubilee, especially when the situation like the current one exists. Meaning that we are probably looking at a deepening political crisis in the medium-term, hence my fear that we will slide into a “Warlord Democracy” sooner rather than later.

The Brutal Truth: There is NO long-term solution that does not involve either 1) Uhuru and Raila agreeing a political solution (I don’t know the shape and content of that. I do not buy the argument that NASA has all along been playing this game to force a coalition government; or 2) failing that, Raila would have no choice but to up the ante if he wants to keep his base intact. Unfortunately, Uhuru is temperamentally incapable of restraint. His pride is easily wounded when he feels slighted and right now he seems to feel that the opposition do not see him as “Commander-in-Chief”. He will almost certainly call out the police and brutalize Raila’s base. Unfortunately, few countries can sustain a cycle of protest and violence beyond a month before the police and army break down into partisan political factions. If I am right about this, then one of either Raila or Uhuru will eventually buckle. When that happens, we shall revert to either option 1 – negotiations – in which Uhuru is the weaker party- as is always the case when an incumbent is forced to make concessions – or Government resistance with more aggressive repression targeting all regime opponents- in the short-term, this might politically marginalize Raila but it would take the country back to the early 1990s, which would incinerate any legacy that Uhuru thought he had secured.

Related Content:  Wahome Thuku: The Faking Of A Hustler

We are in this situation because the antipathy between the Kenyattas and the Odingas has completely clouded either side’s perception of what a reasonable way out is. The two are a phone-call away from each other. I am sure they have each other’s cellphone numbers. And still they bellow at each other through TV microphones and loud-hailers at political rallies. The problem is that their respective political bases – egged on by their social media nutters- see the other side exactly as the two see each other: grasping and double-dealing ogres with whom it is impossible to strike a deal that could be honored. Uhuru’s core support is not pro-Uhuru, some are in fact viciously critical of him, they rather are rabidly anti-Raila. Raila still has more ‘religious’ support than Uhuru but this, too, has somewhat dissipated over time. Yet such support as he still has is hysterically anti-Uhuru. They too are shouting at each other across a chasm that might yet swallow the county. Thus does Kenya suffer from a family feud that increasingly begins to look like a blood feud. I despair.

(NB: There are some who think that I am exonerating the IEBC from culpability for running a monkey of an election. I am not. However, the form that the crisis has now taken is unquestionably driven by leaders. Once the Supreme Court delivered its judgment, it lay with the politicians to get the IEBC problem sorted out. Uhuru and Raila cannot sort IEBC out because they won’t talk to each other even though they both know that Kenya is hurtling to a terminal crisis. Of course, the structural cause of all this is our screwed up ‘state” as well as the terminally decrepit electoral system. However, the proximate cause is the politicians. And no, the structural problems cannot be addressed before the 26th of October 2017!)

Writer is a lawyer and seasoned columnist.

Opinions are writers own and don’t necessarily reflect those of Kenya Insights.

The Implications Of Raila Odinga’s Withdrawal From Election and Why There Will Be No Election On The 26th.