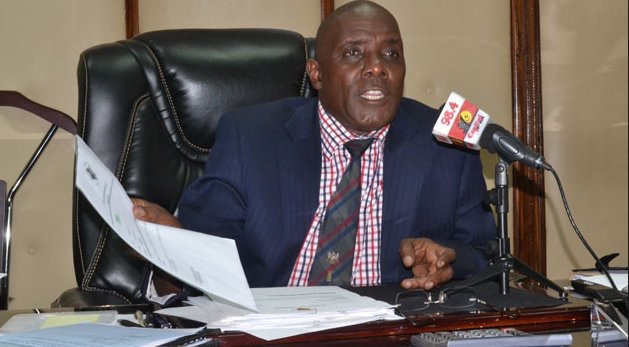 Below is the content of the letter Swazuri sent to the Head of Public Service, Joseph Kinyua highlighting his plights on INFRINGEMENT OF FUNDAMENTAL AND CONSTITUTIONAL RIGHTS DURING ARREST BY EACC OFFICERS AND SUBSEQUENT BREACH OF CONSTITUTIONAL PROVISIONS ON THE PURPORTED APPOINTMENT OF ACTING CHAIRPERSON – NATIONAL LAND COMMISSION

I wish to refer to the above subject matter and respectfully address you as hereunder.
As you are now well aware, I am the subject of charges presently in court in respect to compensations the National Land Commission approved in respect to the SGR project. I am looking forward to having my day in court and vindicating my name and that of the office I hold and respect when we face our accusers.

However, in the meantime, I wish to bring to the attention of your office certain egregious infringements of my human rights and dignity as a senior public official and a citizen of this country.

1. My house was raided and I was arrested at 5:05 am on Saturday 11t​ h August 2018. The arresting officer, a certain Abdi or Hassan told me there an then that I was under arrest and would be arraigned in court on Monday 13t​h August 2018. This statement betrays the existence of prior instructions to detain in custody me until appearance in court.

2. Indeed, I asked to be shown the warrant they were acting on but the more than 21 officers who came to arrest me blatantly refused.

3. I also asked for the reason(s) for my arrest but I was not informed of any but the officers insisted I was under arrest and I was whisked away in a convoy of cars. The charges against me were only revealed to me at 5pm on Saturday, almost ten hours after arrest. Article 49 (1) (a) provides that an arrested person ought to be pr​ omptly informed in a language that they understand of the reason of their arrest.

4. It is noteworthy that the first thing the arresting officer did when they entered my home was to confiscate my mobile phones and those of my wife also. As a result, I could not seek help from anybody including my lawyers. The phones were later returned to me at 8pm on that fateful Saturday.
​Date​: 14t​ h​ August 2018

5. At the EACC integrity centre police station my advocates requested on several occasions for me to be released on favourable bond terms. The officers categorically refused and said that they had strict instructions “from above” to detain me for the weekend. It is informative that other suspects were successfully released on bond after arrest that same morning.

6. Once I together with six others including Mr. Atanas Maina, the Managing Director of Kenya Railways were in the cells that the EACC announced that the remaining suspects could report to EACC offices on Monday morning, which they all did. They were promptly processed and we managed to go to court together. This begs the question, what was the point of detaining me for 50 hours from Saturday?

7. The actions detailed in the paragraphs above are in my view illegal, malicious and a violation of my fundamental rights as expressly provided in Article 49 of the Constitution of Kenya.

8. It is noteworthy that my arrest and subsequent charge in court came against the backdrop of at least two incidences:

a. Sometime in 2017 before the alleged fraudulent payment for compulsory acquisition was made by the Commission for the subject parcels in Embakasi i.e. LR No. 9084, 9085, 9086, 9087 and 9088 the EACC had written to us to pay for a certain number of parcels allegedly belonging to Halake Waqo the CEO of EACC together with four other EACC officers. Upon verification of the titles we found them to be forgeries and hence rejected payment to the named owners. We upheld payment to the properties the subject of the current charges yet these two sets o properties were next to each other. That is when the witch hunt started by Mr. Waqo.
b. Sometime in September 2013, the management of Nakuru Boys High School complained to us that 3.65 acres of their land had been grabbed. On this grabbed land, the grabbers had leased the land to three petrol dealers, Shell, Total and National Oil.

Due to lack of documents, NLC was unable to prosecute the grabbing until last week when we obtained the necessary documentation. That information indicated that one of the school land grabbers is Hon. Mohammed Yusuf Haji, Senator for Garissa and father to Mr. Noordin Haji, the new Director of Public Prosecution.

c. On Friday 10t​ h August 2018, I travelled to Nakuru and visited both the grabbed school land and a certain parcel at Shabab Dispensary opposite Mama Ngina Primary School. As the law provides I promised to revoke these parcels in order to recover them for public interest. That same evening, Mr. Noordin Haji gave orders for my immediate arrest that led to EACC officers to arrest me in the early hours of Saturday morning.

9. Both acts go against Article 250 (9) of the Constitution of Kenya which provides that public officers cannot be paralyzed or punished in the course of their work if their actions are done in good faith.

10. To support the above assertions, I have looked at the charges and I note that the charges against me have been broken down to several counts to make them appear more onerous than the rest of the accused persons and yet the charges are exactly similar in nature and content. This is a blatant attempt by the EACC and the ODPP to sensationally make the charge sheet appear as if I was the key mastermind in this alleged crime with most charges being levelled against me. Consequently, the Magistrate preferred higher bond terms against me than my other co-accused for this specific reason.

Further, I have been essentially been removed from office by order of the court as I need to make prior arrangements with the “the new management” if I am to access my office.

11. Sir you must also be aware of the activities happening at the NLC as from Tuesday 14t​h August 2018, a day after my release on bail. The magistrate ordered that I should not go to my office unless accompanied by a police officer and after consulting with the “new management”. That order has apparently been translated by the Vice Chairperson to mean I have been suspended or interdicted. She has subsequently done the following:

a. Convened a Commission meeting attended by only 3 commissioners where they ostensibly replaced the CEO, Director of Valuation and Director of Finance.

b. Issued a press release on Wednesday 15t​ h August 2018 where the Vice Chair stated ​“…that the Commission is fully constituted with the Vice Chair, Abigael Mbagaya Mukolwe performing the duties of the office of the chairperson as has always been the case when the incumbent is out of office.” No provision in the Constitution and the NLC Act makes provision for such an eventuality.

c. On 16t​ h August 2018 the Vice Chair issued an internal memo which resolved that ​“…in the time being, the vice chair, Abigail Mbagaya Mukolwe, will perform the functions of the Chair as she would ordinarily perform in the absence of the Chairman.”

12. Article 250 and 251 is clear on the process of appointment and removal/vacancy of the office of Chairperson. Section 10, 11 and the First Schedule of the National Land Commission Act also make explicit provisions in respect to this procedure. The fact that the person reportedly taking over as Chairperson of the NLC not only orchestrated my arrest but we have evidence of her corrupt acts as Vice Chair make it untenable to allow this state of affairs to continue.

All these are clear indications that the main aim of the pending court case was to replace me through the backdoor outside constitutional and statutory provisions. We are also alive to the fact that all the machinations on this matter were perpetrated by one of the commissioners who has persistently been pursuing a negative agenda against the Commission and myself.

All the above activities coupled with a sustained media campaign are meant to intimidate myself and the work of the Commission with the overall aim of derailing government projects that involved compulsory acquisition. From the time these investigations started in January 2018, Commissioners and Officers are scared of committing themselves to any work involving compulsory acquisition.

I have single handedly tried to implement compulsory acquisitions works and that is why I am being accused of being a lone ranger. Government projects must go on irrespective of fear and threats. The Land Acquisition Committee has only met twice since January 2018 to approve acquisitions for more than 24 government projects and even that was after my instigation. The country stands to lose billions of shillings from stalled projects such as SGR, Karimenu Dam, Mwache Dam, Lower Nzoia Dam and several projects linked to the ‘Big Four Agenda’.

From all the foregoing my fervent request is that you urgently intervene in this matter in seeking answers to the reasons for the infringement of my constitutional rights by the EACC officers as well as assist in addressing the issue of my ostensible removal from office. Your assistance will be highly esteemed.