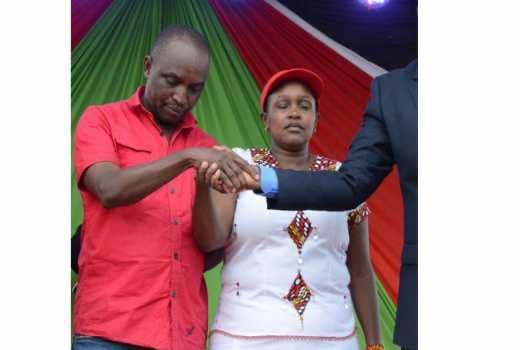 Personal life details about Peter Karanja, a suspect in the Tob Cohen murder who, after his arrest, quickly gave in and led the DCI to the Dutchman’s body have now been exposed. According to TELEGRAAF the man was constantly fighting with his wealthy wife and according to her,  had loose hands, drank large amounts of alcohol and cheated with young women. Coincidentally that is exactly what Sarah W. accused Tob Cohen of.

Peter Karanja, husband to Gilgil MP Martha Wangari, was arrested on Wednesday by the DCI in connection with the death of Tob Cohen. Karanja and the Billionaire’s wife are suspected to have worked together in the murder.

Martha Wangari  accused the husband of being an adulterer, alcoholic and having uncontrollable aggression. Infact he was so violent, she had even admitted in local media that she feared for her life. The MP had announced in 2018 that the two were parting ways after five years and accused Peter of being “emotionally and physically abusive man who beat her up and never provided for their children.” Peter, a former CEO at the Kenyan federation of self-help organizations, did not want to divorce his wife because he had “invested” a lot in her financially, emotionally and politically.

According to the post, the man who is now a main suspect in the case named Cohen’s wife (Sarah) as an evil genius. He also said his job was just to get rid of the body.

Cohen’s body was found on Friday, the Directorate of Criminal Investigations (DCI) Boss George Kinoti said the tycoon was tortured before he was murdered and his body dumped in an underground water tank at his home.

Related Content:  Why We Can't Eat Out The Locust Menace
Kenya Insights allows guest blogging, if you want to be published on Kenya’s most authoritative and accurate blog, have an expose, news, story angles, human interest stories, drop us an email on tips.kenyainsights@gmail.com or via Telegram
Related Topics:
Up Next

How A Pastor, Widow And Chief Attempted To Defraud An Insurance Company Of Sh8 Million