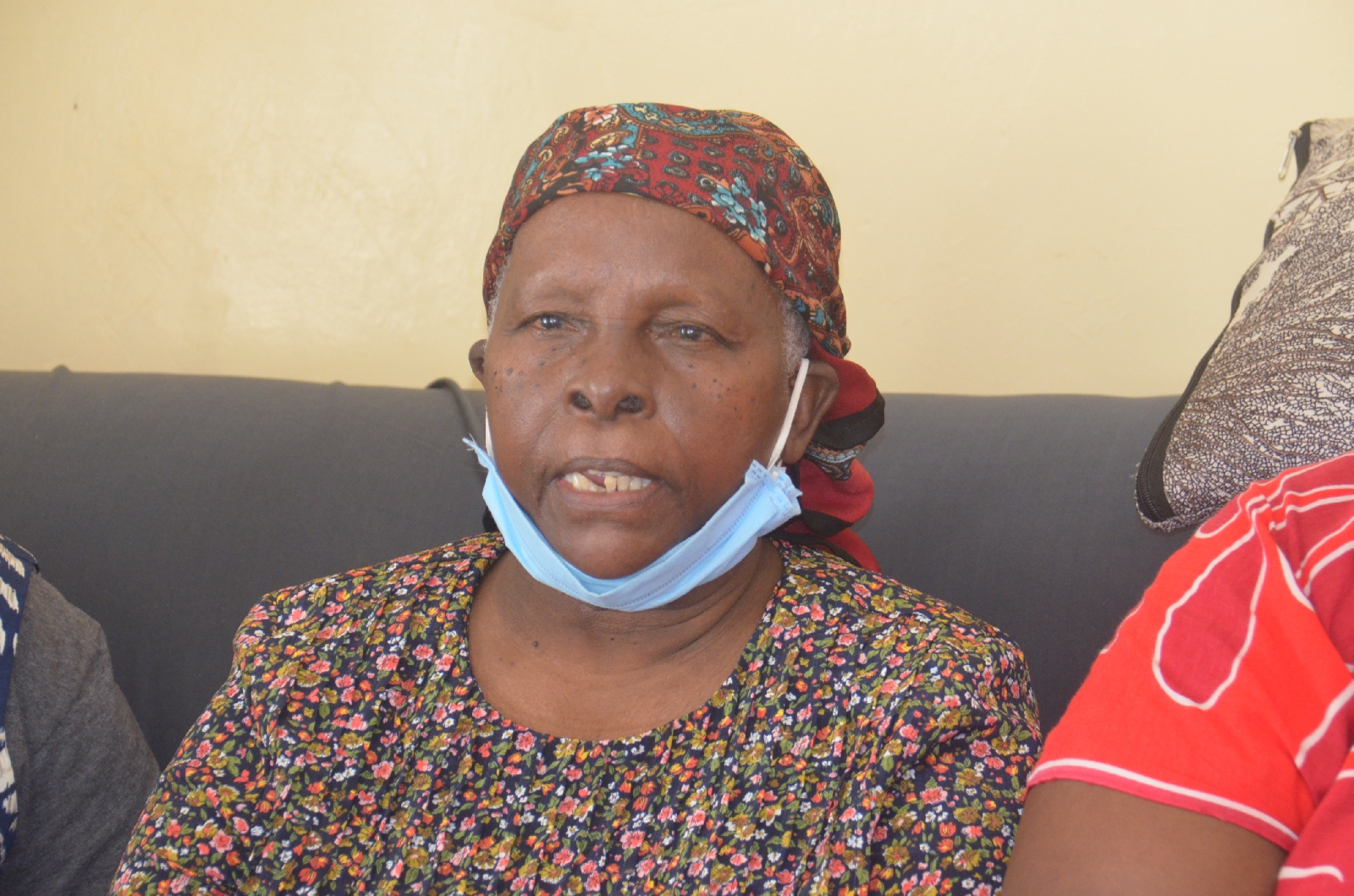 Mrs. Katharina Walele
An 80 year old widow of a prominent Mombasa businessman the late Gasper Walele is appealing to the government through the office of the Director of Criminal Investigation George Kinoti to intervene in a fraud and forgery case where her three sons and the family advocate have colluded to deprive her of property worth Sh 600 million she inherited from her late husband.
Addressing the media in her home in Majengo Mvita Sub-county, Mrs. Katharina Walele said she was married to her late husband when she was 18 years old.
Mrs. Walele said they had 12 children with the late Walele but four are deceased, leaving them with 8 children (5 daughters and 3 sons) before her husband died in 2012 aged 75 years.
The widow pointed out that immediately after the death of her husband, she has started                            in being at loggerheads with her sons who wanted to disinherit her through forged will documents.
The widow said she had struggled with her husband to get the wealth he left behind which now the boys claimed to own according to the will.
Mrs. Walele, who was accompanied by her daughters, said it was against African culture for the family property to be divided while the widow was still alive.
She disputed the “will” arguing that it was not possible for such a thing to happen when a widow is still alive.
The deceased served as councilor of the defunct Mombasa Municipal Council and was one time Mombasa branch chairman of the Kenya National Chamber of Commerce and Industry (KNCCI).
Ms. Elinora Walele, deceased daughter who dabbled as the family spokesperson said one of their brothers gave a will which he purported was left by their father in the care of their family lawyer before he died.
Ms. Elinora said they disputed the will because it had no signature of the lawyer and their late father and after he was confronted, he came back with another will but a photocopy signed by their late father, their lawyer and his law firm secretary.
After two weeks, their eldest son also called and said he had their father’s original will but they all read mischief when the signature differed.
According to Ms. Elinora they sensed there was a scheme to defraud their old ailing mother after three different wills were produced and reported the matters to the offices of DCI Mombasa County as a case of forgery and fraud.
Elinora said they produced their late father’s genuine signatures through documents which were in their custody together with the copies of wills for forensic analysis which were taken to Nairobi by the office of DCI Mombasa and the will signatures were found to be forged and fake.
The late Walele’s widow is now demanding the arrest of her three sons and their family lawyer and her secretary for plotting to defraud her and her five daughters of their share of inheritance.
According to Elinora, even after the DCI finding a forgery case, her three brothers and the lawyer have not been called to write statements with the CID Mombasa.
Mrs. Walele is now demanding for the original will which is in the custody of the lawyer and pointed out most of her late husband’s property were also omitted in the forged wills.
The property the widow is fighting to possess includes commercial buildings and plots in
Mombasa and Nairobi and also chunks of land in Taita Taveta.
Kenya Insights allows guest blogging, if you want to be published on Kenya’s most authoritative and accurate blog, have an expose, news, story angles, human interest stories, drop us an email on tips.kenyainsights@gmail.com or via Telegram
Related Content:  Pombe Mag - Ful Tanzania locked out of Kenya’s list of 11 International Flights set to resume in August.
Related Topics:
Up Next

Breonna Taylor: Family Of Black Woman Shot Dead By US Police To Get $12M In Settlement

Fears Over Resurgence Of Covid-19 Infection