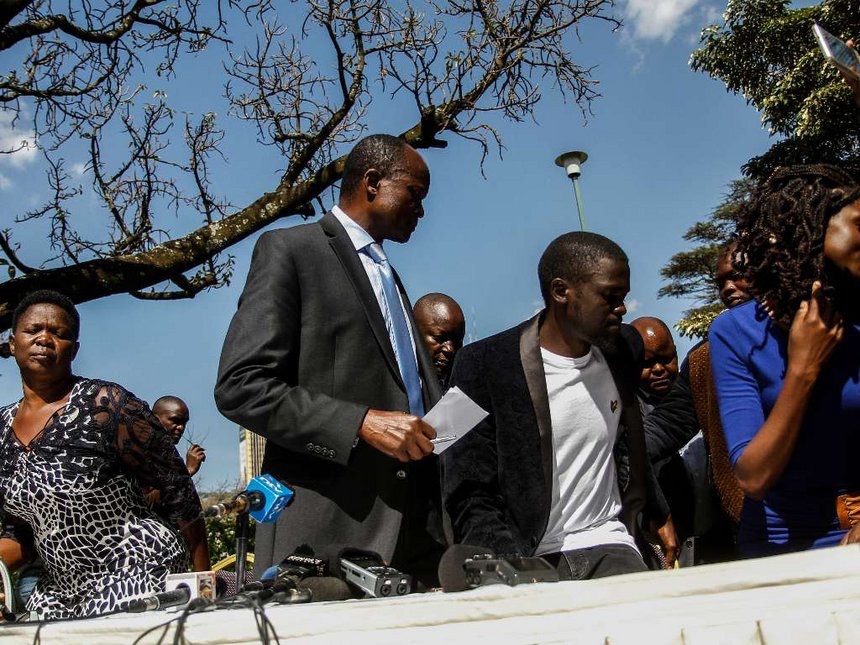 Governor Obado And his family after his presser in Migori.

It all started with a glance, then a text before it blossomed into an explosive love affair, which climaxed into a pregnancy before demands for a Sh35 million house in Nairobi soured the relationship.

This is how Migori governor, Okoth Obado described his six-month romantic relationship with slain Rongo University student, Sharon Otieno when he was grilled for at least eight hours by the police on Tuesday.

In his statement to detectives in Kisumu on Tuesday, the governor explained that he first met Sharon in November last year after she initiated communication.

According to the governor, Sharon had sent a couple of text messages to him after last year’s election prompting him to invite her to Migori for a first meeting.

However, on that day, Obado was not able to see her as he had other engagements on county matters; an incident which infuriated the late Rongo university student who sent him a text to complain.

Later in the day, the county boss called to apologise and asked Sharon to reschedule a meeting for another day as he was to leave for Nairobi that evening.

Coincidentally Sharon told Obado she wanted to ‘see him’ on her way to the city too, a development which led to the pair having their first meeting in Nairobi.

The next day, the two met at the Intercontinental Hotel for a drink. In Obado’s words, one thing led to another as the two began a romantic relationship.

The Governor would then see Sharon regularly and most of their dates were either in Kisumu or Nairobi until one day she told the Governor of her pregnancy.

Obado recalled that in April during the Devolution Conference in Kakamega, he and other county bosses were booked at Acacia Hotel when Sharon travelled to Kisumu and checked in at Imperial hotel, in his name.

The Imperial hotel manager then called him saying ‘welcome your excellency to our hotel’ but he could not understand what he was talking about as he had already checked into the other hotel.

The manager then informed him that Sharon had checked in to ‘your usual room’. Late that evening, Sharon called the governor asking him to go to the Imperial hotel.

As he contemplated whether to go or not, he received a call from his wife Helen who inquired about his whereabouts. She then dropped a bombshell.

Hellen asked her husband whether he sure that he was at Acacia hotel but when he insisted that he was she demanded to know who Sharon Otieno was.

According to the statement, the Governor got confused and struggled to explain to his wife that there was no mischief involved and even asked her to come to Acacia.

The wife then warned Obado against going to Imperial saying if he dared, she would get the entire episode on camera as she had a team monitoring him.

Scared by the warning, Obado called Sharon to say he can’t make it for the night since madam was around. Ironically, Sharon was infuriated, Obado said and accused him of being with another woman and using madam’s name as an excuse.

Sharon told Obado that she knew where the wife was, telling him ‘every time I want to see you I first monitor madam’s movements’.

He asked Sharon to plan and meet him later in Nairobi after the conference. Sharon, who had at this point not revealed to Obado that she had other children from previous relationships, wanted the Governor to move her to Nairobi.

The county boss linked her with an estate agent who found a Sh10 million apartment but she declined the house. She instead got another house in Westlands worth Sh35 million.

Obado declined to buy the house and following further negotiations, Sharon said she was willing to settle for a Sh25 million house. This too, was declined. This was in May this year.

After this disagreement, the Governor then cut communication with Sharon and blocked her calls. Perhaps out of desperation, the student began sending texts to the governor’s close aides even family members.

Related Content:  Why Kenyan Billionaire Humphrey Kariuki Is Likely To Lose His Cyprus Citizenship This Time

Obado told police at one time, Sharon sent a picture of her baby bump to his eldest son who upon inquiring what the picture was for, was told: “I am carrying your brother, send it to your mother.”

As the texts intensified, his wife one day called him and asked that they talk as a family. She asked the governor to hand over his phones to his security so that they can have an uninterrupted discussion.

Having sensed the issue at hand, Obado spoke first and confessed to his wife about ‘that Sharon that you had warned me about sometime back’, who was now pregnant. The two later called their children and explained the same to them.

Obado then told investigators he later received a call from ODM chairman John Mbadi who said there was a journalist by the name Barack Oduor who had a story about him. Mbadi sent him Odour’s number.

The Governor called Odour and the two agreed to meet in Migori.  The journalist then met Obado about three days later in the company of Lawrence Mula, a former MCA.

They explained their mission but the Governor who seemed unmoved told them to proceed and publish the story since the ‘pregnancy was no longer a secret in the family and Migori’.

However, the two explained that their mission was not malign his name but would love him to sort out the issue with Sharon amicably. Obado asked them then to go and ask Sharon what she wanted.

About a week later, Mula travelled to Nairobi and met Obado at Heron Court saying Sharon had now settled with a proposal of getting a plot in Homa Bay.

Two days later, Mula called to say Sharon had identified a plot in Homa Bay town which she wanted him to buy for her.

Obado declined the proposal and asked the MCA to ask Sharon to identify a plot, between an acre and two acres. He then offered to construct a three bedroomed house for her.

The Governor recalled that just a few days before the abduction and eventual murder of Sharon, he had received a text from journalist Oduor cautioning him that the matter was getting out of hand and he needed to act immediately.

Odour is said to have warned Obado not to blame him for anything that happens on the Sharon matter. The next thing, Obado says he heard was that Oduor and Sharon had been abducted and Oyamo (Michael) his PA had been implicated.

His Communication Director Nicholas Anyour was the first to uniform him about the incident before Nyanza regional police chief called him on the same matter.

“The pregnancy was not a problem to the governor. Sharon was in the process of being assisted and that if the child eventually was to be born and is confirmed to be his, she was to be provided for. There is nothing to gain with her death. What was the benefit?” Obado’s lawyer Cliff Ombeta said.

On Wednesday Obado was accompanied by his family as he sought t to distance himself from the brutal murder of Sharon. Obado has since given police his DNA samples.