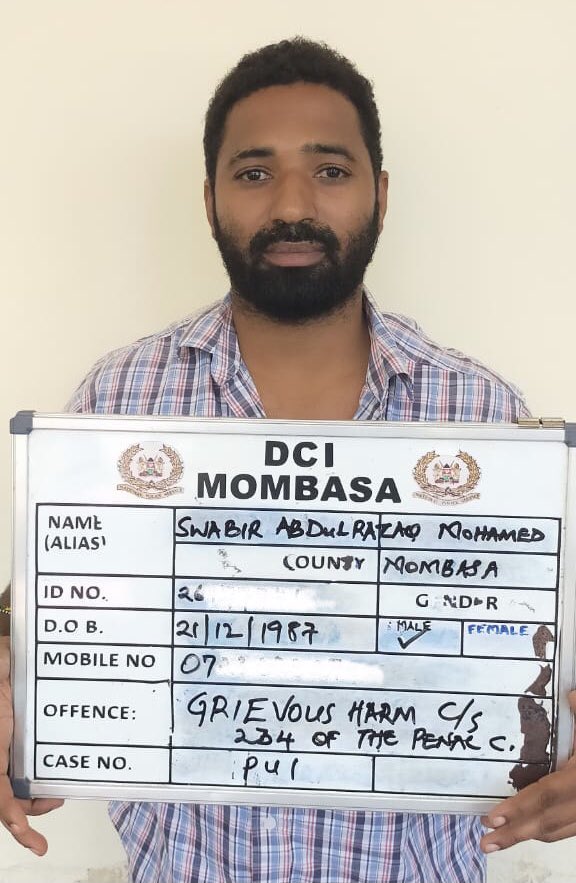 Swabir Abdulrazaq Mohamed, 33, who works as a security guard at Ajab Unga Factory in Shimanzi, Mombasa, has now brought more trouble to his employer than anticipated. This follows a viral video that eventually led to his arrest on Monday.

In the viral video, Abdulrazaq is captured torturing  the victim, for allegedly trespassing into the factory’s premises. Using a burning mosquito net, Abdulrazaq subjected the victim to untold anguish by burning him using the flaming drops of the net, as he whipped him using a plastic pipe. The victim, whose hands were tied and neck secured on an electricity pole using a rope, wailed in despair as he begged for mercy, from the visibly happy tormentor.

All this happened as curious onlookers milled around appearing helpless, as some recorded the despicable scene using their phones. The DCI say that victim who is a street urchin who ekes his living through seeking alms in the streets of Mombasa.

The incident is said to have taken place a while back before the video went viral and efforts to trace the victim who doesn’t have a permanent home as he’s a street urchin has not bore fruit giving a possibility of no victim no case which would be to the advantage of Abdulrazaq.

Abdulrazaq is still in police custody as investigations goes on.

The video sparked an outrage with a number of Kenyans on social media threatening to boycott the products of Ajab Unga as a sign of protest to the despicable act. Consumers worldwide resort to product boycott as a legal striking arm to an offending company.

Kericho Senator Aaron Cheruiyot is leading Kenyans in calling for the boycott of Ajab Unga saying the arrest of the suspect is not enough.

Arresting this guy isn't enough.
Kenyans should boycott products from such companies..
Which company is this?
Did they issue any formal statement on this incident? pic.twitter.com/bZj2zWvOeQ

“Congrats DCI. To Kenyans of goodwill, can we boycott the Ajab products until the Miller offers public apology on behalf of their agent/worker while the antagonist and victim are subjected to justice system by DCI?” Said Peter on Twitter.

These arabs think they own Mombasa, and that was a racist act. I'm sure if it was a fellow arab the watchman wouldn't have burnt him like that. So we boycott that Ajab arab company.

“You don’t even have the courtesy to give a press statement on the incident! No more Ajab products for me. Goodbye!” Binti Athman posted on Ajab Flour Facebook.

“Shame on you . I have even thrown away your Unga. No respect for human rights. No social ethics or code of conduct at all. No for me and Directorate of Criminal Investigations- DCI this licence should be cancelled on human rights grounds.State House Kenya.” Onyango Oduor protested on Facebook.

“Very sad that as a company you haven’t found it worthy to address the inhumane way a suspected thief was brutally tortured by one of your staff. Unless you condone the heinous act.” Liz Kiarie Wrote on Twitter.

“The best medicine for this is to boycott Ajab product. Kenya must learn to serve justice where possible. Hit where it hurts most.” Tweeted Mkenya.

However, not everyone is for the idea of boycotting the product as blogger Mutai puts it.

This man is Swabir Abdulrazaq, works as a security guard at Ajab Unga Factory in Mombasa. I have seen a few Kenyans claim Boycott Ajab Unga products. Why should we do so to sabotage work for hundreds of Kenyans during #COVID19 for the mistake of one GUARD? Let him face the Law. pic.twitter.com/E97Bu09wmT

Hon. Kigen Koech echoed Mutai’s sentiments, “Exactly. Let’s deal with the disease and not the symptoms.”

Tony Musyimi says, “Everyone should carry their own cross… It’s typically wrong and unethical for someone to try and bring down a company which has for years provided employment for vulnerable citizens of this nation because of single individual.”

“Yes it was an individual mistake by the company worker. The company should not be held responsible for a mistake done by a grown up. The company has done its mandate of suspending him and leavethe rest to Police.” Another user posted.

However, after hours of the employee’s arrest and persistent boycott threats from many, Ajab Flour was smoked out and forced to issue a statement. “The company strongly condemns the heinous acts and does not condone the abuse by any person.” Reads part of the statement seen by Kenya Insights.

“Since the incidence was brought to the company’s attention, by the DCI, the company has cooperated with the authorities and simultaneously incorporated disciplinary action against him. The accused person has since been suspended from duty pending the outcome of investigations by both the police and the company.” It reads.

Ajab Flour is a subsidiary of Grain Industries Limited which is associated with Mombasa Billionaire Jaffer Mohammed.

Kenya Insights allows guest blogging, if you want to be published on Kenya’s most authoritative and accurate blog, have an expose, news TIPS, story angles, human interest stories, drop us an email on [email protected]ail.com or via Telegram
Related Topics:
Up Next