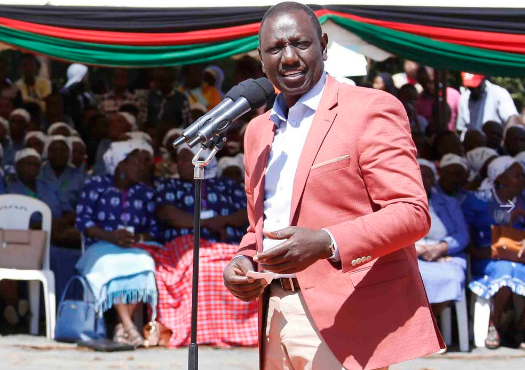 They were responding to the Thirdway Alliance Party leader Ekuru Aukot’s Punguza Mizigo (Constitution of Kenya Amendment) Bill which proposes the introduction of a single seven-year term presidency.

High Representative for Infrastructure Development in AfricaRaila Odinga is among the groups that have backed the seven-year non-renewable presidential term and an executive Prime Minister in their submissions to the Building Bridges Initiative (BBI).

In February, during an address at Chatham House, London, Ruto dismissed calls for a referendum aimed at creating positions for what he termed as ‘selfish leaders’. DP Ruto and his allied legislators have sworn to oppose any constitutional changes that aim at either expanding or cutting the powers of the Executive.

Ruto while addressing two separate church gatherings in Narok County, he welcomed Punguza Mizigo and Building Bridges Initiative calls to change the Constitution but questioned the brains behind the bill which he says is not ‘people-centered’ and whose objectives doesn’t seem, according to Ruto, truthful.

“The talk around the referendum should be carried out in an objective manner, devoid of deceit and done for the interest of all Kenyans, not for selfish interests,” DP Ruto said.

While ODM party which is deep into the handshake arrangement supports the seven-year non-renewable term saying that that will take focus away from the presidency which has a matter of life and death for ethnic leaders. A leaked BBI preliminary report also supported the proposal.

The National Assembly chief whip Benjamin Ashiali stated that if passed, the single seven-year term for president proposed in Ekuru Aukot’s Punguza Mizigo Bill would lead to two different elections-one for MPs and governors and another for president.

“I had the intention of supporting Punguza Mizigo, but there is one proposal that I do not agree with. Kenya will be holding many separate elections. This will not reduce our wage bill at all,” said Washiali.

“According to the Punguza Mizigo initiative, when the term of the president comes to an end, Kenyans would be subjected to another round of elections for only one person, when the rest of the leaders have settled down,” Washiali added.

“What if one day we elect a leader who turns out to be a dictatorial President? We only want five-year term limits for Kenyan presidents,” Uasin-Gishu Senator Margaret Kamar said while opposing the bill and a leaked BBI memo.

on their defense, The Third Way Alliance has defended their proposal to have a  single seven-year presidential term stating that it will end violent competition for the presidency, and stop looting by incumbent fighting to finance reelection campaign.

“The proposed one seven-year term limit will end the “do or die” culture of re-election. There is an established violence trend in all our electoral cycles when the incumbent seeks re-election. There is accelerated theft of public money in the last two years of a first-term presidency because of the need to finance re-election. One term will also stop the cyclical economic meltdown witnessed during 1992, 1997, 2007, and 2017 elections,” the Bill argues.

Over the weekend Tanga tanga camp kept up its opposition to the Raila-Uhuru endorsed Building Bridges Initiative, which winded up their public hearings and will be retreating to compile its report that will be submitted to President Uhuru Kenyatta and Raila, who set up the team following their March 9, 2018 handshake.

Caleb Kositany, Ruto’s diehard fan, and Soy MP inculpated the BBI team of pursuing selfish interests stating that it was suspicious that people who supported the 2010 Constitution had changed tune and started calling for changes in the same law.

“The Constitution should be changed based on the views of Kenyans and not because of individual interests. Some of us had suggested we amend the 2010 Constitution and others now calling for changes insisted that we pass it without amendments,” Kositany said.

Uasin-Gishu Woman Representative Gladys Shollei who is also a tanga tanga member rubbished off  BBI team seriousness sitting that the team of ‘busybodies’ was wasting time in five-star hotels instead of collecting views and serious questions raised in the set up of the 2010 constitution from ordinary Kenyans and their leaders.

Uasin-Gishu Governor Jackson Mandago, who previously said he longer puts politics and political game in his heart, called out the BBI team for not taking views from leaders in his county. Mandago also has hinted that the council of governors was plotting to introduce another referendum campaign that would be dubbed Ugatuzi (devolution) to push for more resources to devolved units.

“As county governments, we are not on BBI and Punguza Mizigo groups. We are now bringing forth our referendum called Ugatuzi because we have been frustrated by Parliament. Ours will increase resources to counties,” governor  Mandago said.

National Assembly Majority Leader Aden Duale, who, most probably because of what is seen as a targeted political war on corruption directed to Ruto’s camp, has disappeared from the Tanga tanga movement activities is of contrary opinion and has stated that he will support a parliamentary system of government to avoid violence that is incontrovertible every election year.

Related Content:  Babu Owino: Ruto Should Resign And Must Be Arrested

“I am going to convince the President and Deputy President and members of Jubilee Party to support the parliamentary system,”  Aden Duale stated.

Kenya Insights allows guest blogging, if you want to be published on Kenya’s most authoritative and accurate blog, have an expose, news TIPS, story angles, human interest stories, drop us an email on [email protected] or via Telegram
Related Topics:Building Bridges InitiativeRaila OdingaUhuru KenyattaWilliam Ruto
Up Next