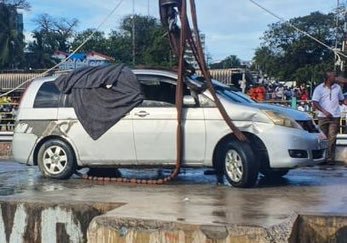 Mixed reactions from Kenyans on Twitter popularly branded as KOT after the Kenya Navy led 2 weeks operation of retrieving the plunged vehicle was a success at last even though lives were lost. 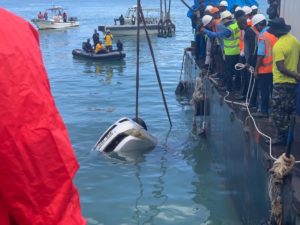 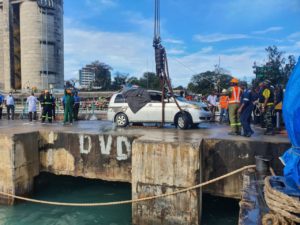 Here are randomly sampled tweets on different sampled hashtags and trending topics on the Kenyan trends.

Cyrus Oguna warns journalists to be mindful of the pictures they take after the retrieval because some might be disturbing to the public. #RecoveryInTheDeep pic.twitter.com/ZFhAfeW3eb

After 13 days, the family of Mariam Kighenda and her daughter Amanda can now have closure. My heart goes out to them. #RecoveryInTheDeep pic.twitter.com/6WiCXh4fcO

Atheists are asking a very hard question and we need to answer them ASAP… They are asking why we are grateful and thanking God for the retrieval of THE dead bodies yet the same God "neglected" the deceased at their hour of need. #RecoveryInTheDeep

Those who were doing maths about the water pressure and PSI, I hope you've seen that the car is intact.#LikoniFerry pic.twitter.com/KZg378QcIC

Now that the bodies of Mariam and Amanda have been retrieved, we are now waiting for disaster celebrities who happen to be our politicians to start giving their useless condolences.Anyway may their souls rest in peace. #LikoniFerry pic.twitter.com/3G4qfNpZdx

Is there a conspiracy behind Mariam Kighenda's Tragedy at Likoni ?Have we been given the full story ?? I still feel there is more to this …. #LikoniFerry pic.twitter.com/7eLnsMcR7X

#LikoniFerry
So sad that just a simple car has taken 2 weeks to retrieve, not forgetting that Kenya navy is allocated billions each financial year. What if Alshabab came through Indian ocean!? Kuuliza tu jamani, ..@khalidjoho

Related Content:  Court Declines To Stop Money Laundering Charges Against Lawyer Charles Njuguna In Auditor General’s Office
Kenya Insights allows guest blogging, if you want to be published on Kenya’s most authoritative and accurate blog, have an expose, news TIPS, story angles, human interest stories, drop us an email on [email protected] or via Telegram
Related Topics:Indian OceanKOTLikoni ferryNavyTwitter
Up Next