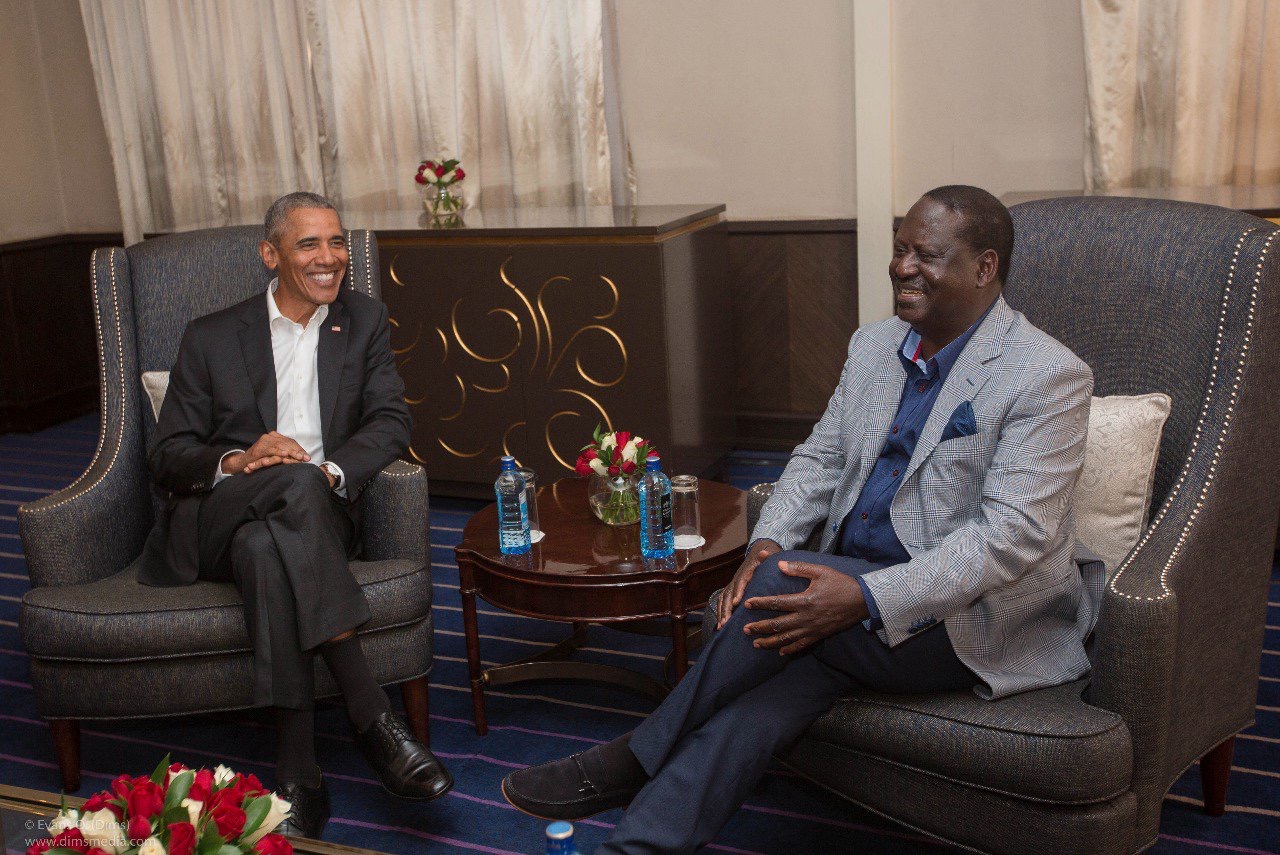 Former US President Barack Obama with Raila Odinga when he visited Kenya recently.

Below is the statement from the Prime Minister which coincides with President Uhuru’s statement this Sunday reaffirming his fight on corruption when at the expense of losing friends. This happens at the heights of demolitions of illegal structures and arrests of senior land commission officials and Kenya Railways:

In the recent couple of days, the Government of Kenya has mounted a commendable crackdown on corruption and the culture of impunity on which it rides.

This crackdown and the support by the public were unthinkable at the start of this year with Kenya torn down the middle by ethnic politics, elections and impunity until the MoU in the Building Bridges to a New Kenyan Nation happened with a very clear agenda on how to address our ages old problems.

Thanks to the bipartisan support, public lands whose recovery started then stalled under the NARC regime in 2003, has kicked off, with the grabbers denied the ethnic and political party sanctuaries they usually hide in. The political atmosphere has enabled us to look at our problems minus the usual ethnic lenses. Attempts by suspects to appeal to their ethnic bases have therefore generated near zero support.

As the crackdown continues, as it must, we need to see similar energy and speed directed at recovery of assets that were acquired from the proceeds of corruption and impunity.
It is fair to expect that the business premises that were set up on public land generated some private gain for the illegitimate owners in the same way stolen public funds generated income in the form of bank interests and property for the suspects.

The Asset Recovery Agency must move with speed and ensure that the suspects, both those out on bail and the ones facing arrest, do not hide their ill-gotten wealth or access and use them to undermine justice and frustrate the war on corruption and impunity.
Kenyans need these monies seized and returned to the public to finance the many gaps being experienced in the development plans, including repayment of the ever-rising foreign debts.

Partly because of wanton theft of public funds including those from donors, taxes are going up on virtually everything. Ordinary Kenyans must not continue to bear this burden while the corrupt keep their loot.

Asset recovery must be seen and felt in our anticorruption crusade. Depriving corrupt actors of these ill-gotten wealth and returning them to the public will support development and economic growth. It will restore confidence in the current crackdown. Corruption must be made a painful crime.

The Asset Recovery Agency must move out of boardrooms and be seen to be acting publicly in unison with the Director of Public Prosecutions, the Ethics and Anti-Corruption Commission and the Directorate of Criminal Investigations.

It is equally important in the process of asset recovery to work together with the Kenyan public. Many people in this country want to contribute to this war and are looking for a way in which they can assist the anti-corruption agencies to remove this scourge from our society. It is the people who know better who is living beyond their means. The public is the best source of information.

The Asset Recovery Agency needs to urgently set up a platform through which the public can share this information with the government.
All branches of the government; the Legislature, Judiciary and Executive must pull in the same direction if the corruption networks are to be overcome.

The public currently feels cheated by Parliament, which has become the weakest link in this war, with reports of money changing hands for adoption or rejection of reports. This is a major shame to the nation and deserves urgent and thorough investigation by multi-agency team from the EACC, DPP and DCI.

In the March 9 MoU, we agreed to fight corruption from a wide and common front by strongly supporting whistleblowing from all Kenyans. The MoU mandates the public to report corruption whenever they witness it. Kenyans must take up this role and also pressure their elected representatives to fight corruption or resign.

This is also the time for our international partners, who have long lamented about the culture of corruption and impunity in Kenya, to play ball, open up their institutions and help trace Kenya’s assets and monies hidden in their countries.

About three months ago, the DPP appealed for the collaboration of the Federal Bureau of Investigations (FBI) in the fight against corruption. We are anxiously waiting for that support, preferably in more practical ways than routine capacity building and training. Already, Switzerland has promised to probe their banks and trace Kenya’s assets and fund hidden there. All our other partners should do the same.
END.

Related Content:  The Painful Death Of Monica Kimani, They Tied Her Hands, Slit Her Throat And Dumped Her Body In The Bathtub
Kenya Insights allows guest blogging, if you want to be published on Kenya’s most authoritative and accurate blog, have an expose, news TIPS, story angles, human interest stories, drop us an email on [email protected] or via Telegram
Related Topics:
Up Next

Nairobi Governor Mike Sonko Vows To Bring Down All Illegal Structures, Move Out If You’re In These Places