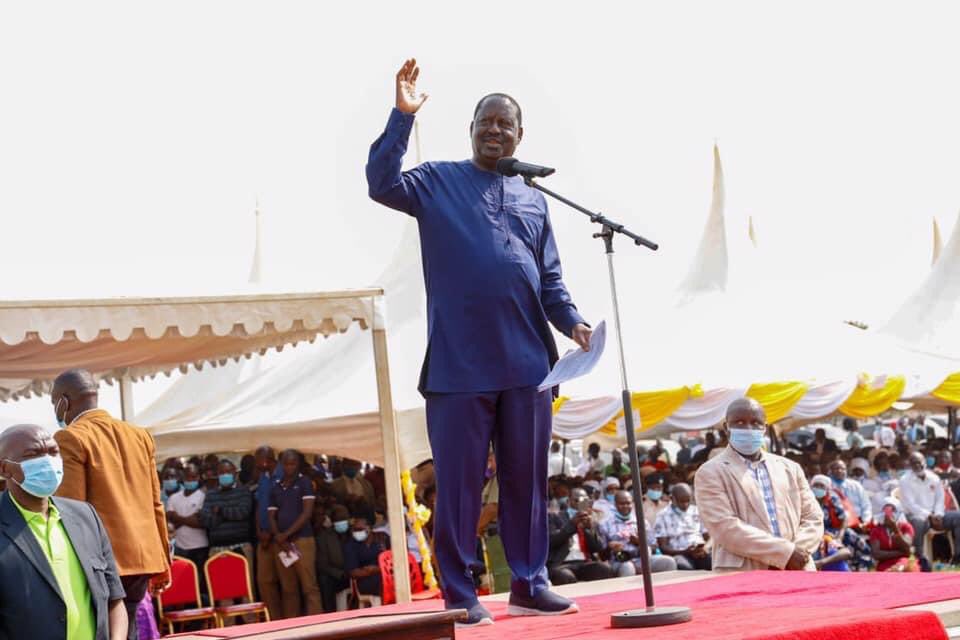 ODM Party Leader Raila Odinga has likened the ‘hustlers versus dynasties’ narrative to Nazism saying it will have the same deadly consequences for Kenya like Nazism did for Germany.

Raila Odinga has however urged Parliament not to criminalize the ‘hustlers versus dynasties’ campaign slogan citing freedom of speech.

In a statement, Raila says, “I have learnt of a bill by Parliaments’ National Security Committee that seeks to criminalize Deputy President William Ruto’s hustlers versus dynasties’ campaign slogan and propose severe fines, jail term and even removal from office for any leaders who propagates it.”

While Raila says the slogan is divisive and deadly, he has strongly appealed to Members of Parliament to drop any attempts to legislate against the slogan.

“As a Country, we fought for, and should respect free speech and association. We should be able to allow the Deputy President and his team to continue with their choosen slogan without any inhibitions. Those of us who sees its dangers should continue educating our people against falling for it. I have faith that Kenyans will see through this divisive and potentially deadly rhetoric and its attacks on fellow Kenyans and reject it in the end,” He said.

Raila says the slogan is similar to Adolf Hitler’s national socialism most often referred to as Nazism an ideology of the Nazi Party which ruled Nazi Germany in 1933 to 1945.

He says Naxism profiled people along race, ethnic, class lines, saying these ideologies causes great trauma to Germans and the world at large.
Ruto has since replied to Raila’s support tweeting, “While AGREEING fully with your defence of FREEDOM of SPEECH&THOUGHT as guranteed by CONSTITUTION,we RESPECTFULLY DISAGREE with your very WRONG UNDERSTANDING of Hustlers BUT will equally defend your thoughts.We will work tirelessly to get Hustlers narrative positively understood.”
Related Content:  David Ndii Throws His Weight Behind DP Ruto For Presidency
Kenya Insights allows guest blogging, if you want to be published on Kenya’s most authoritative and accurate blog, have an expose, news TIPS, story angles, human interest stories, drop us an email on [email protected] or via Telegram
Related Topics:
Up Next