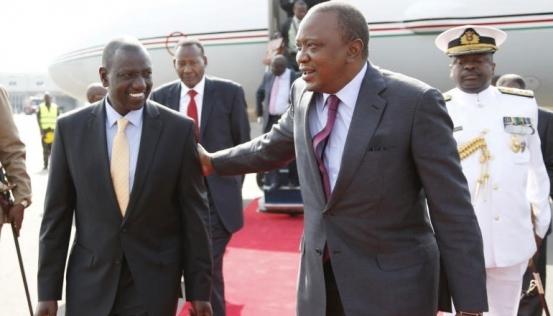 The president’s austerity plan took a major hit as public servants’ wages and allowances continued to eat deeply into the countries development expenditure. Data from the Controller of Budget shows the Presidency, which comprises the offices of the President and the Deputy President,  spent Sh190 million in the nine months to March 2019 and Sh197 million in twelve months to June. During his travels, the President is usually accompanied by officials and security details who draw hefty amounts in travelling allowances.

Mr Kenyatta has pushed for austerity measures since joining office, promising deeper cuts on non-essential items like travel and entertainment, however, the budget on foreign travel has been on an upward trajectory since he took office. The president had at some point even asked top State officials to take 20 per cent pay cut in part of efforts to tame high recurrent expenditure. Critics have described the austerity measures as just talk aimed at hoodwinking investors.

The data also shows that Members of the National Assembly spent Sh1.6 billion on overseas trips, more than twice the Sh719 million they spent in the 2017/18 financial year. MPs’ also increased their salaries and allowances by Sh2 billion to reach Sh11.2 billion during this period the report states. So Much for Austerity.

The country’s fiscal deficit (the difference between revenues and expenditure) has widened to 7.4 per cent of GDP, seeing the country’s stock of public and publicly guaranteed debt surge to Sh5.81 trillion. The last few weeks saw the government freeze hiring for the next three years in austerity measures to reduce the country’s wage bill. Acting Treasury Cabinet Secretary Ukur Yatani also said the Government would cut unnecessary expenditure, such as foreign trips and advertising by Government departments to bridge the fiscal deficit.

The Treasury has in the past four years struggled to implement austerity measures prompted by the under performance in revenue collection amid rising expenditure. the Treasury continues to warn against expenditure on these non-essential items.

Uhuru’s Government To Borrow Sh1.84trn More In Public Debt Before 2022