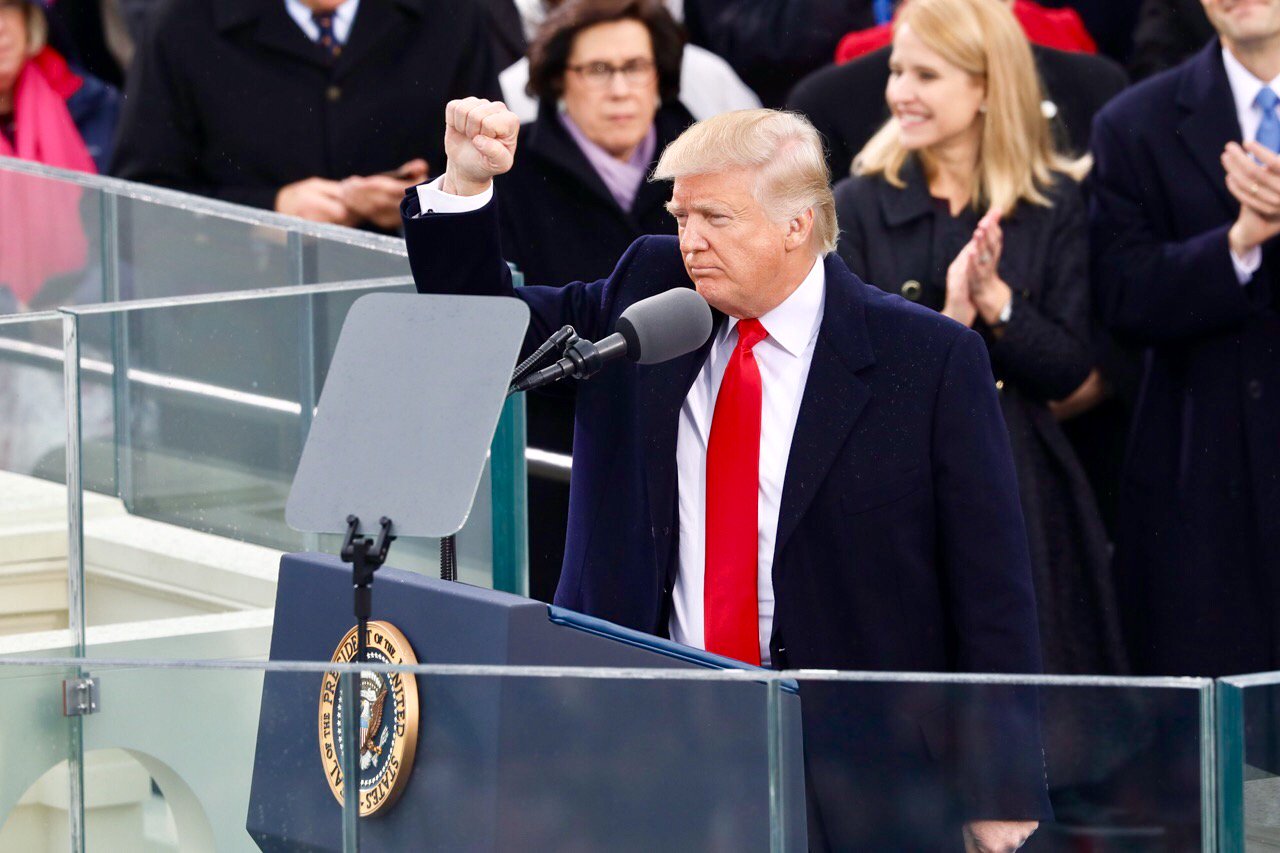 Donald Trump sworn in as 45th president
Below is the full text of President Trump’s inaugural speech:

We, the citizens of America, are now joined in a great national effort to rebuild our country and to restore its promise for all of our people.

Together, we will determine the course of America and the world for years to come.

We will face challenges. We will confront hardships. But we will get the job done.

Every four years, we gather on these steps to carry out the orderly and peaceful transfer of power, and we are grateful to President Obama and First Lady Michelle Obama for their gracious aid throughout this transition. They have been magnificent.

For too long, a small group in our nation’s Capital has reaped the rewards of government while the people have borne the cost.

Washington flourished – but the people did not share in its wealth.

Politicians prospered – but the jobs left, and the factories closed.

The establishment protected itself, but not the citizens of our country.

Related Content:  Kiambu Census Enumerators Accuse The Government Of Forging Schemes Not To Pay Them

That all changes – starting right here, and right now, because this moment is your moment: it belongs to you.

It belongs to everyone gathered here today and everyone watching all across America.

And this, the United States of America, is your country.

January 20th 2017, will be remembered as the day the people became the rulers of this nation again.

The forgotten men and women of our country will be forgotten no longer.

Everyone is listening to you now.

You came by the tens of millions to become part of a historic movement the likes of which the world has never seen before.

At the center of this movement is a crucial conviction: that a nation exists to serve its citizens.

Americans want great schools for their children, safe neighborhoods for their families, and good jobs for themselves.

These are the just and reasonable demands of a righteous public.

But for too many of our citizens, a different reality exists: Mothers and children trapped in poverty in our inner cities; rusted-out factories scattered like tombstones across the landscape of our nation; an education system, flush with cash, but which leaves our young and beautiful students deprived of knowledge; and the crime and gangs and drugs that have stolen too many lives and robbed our country of so much unrealized potential.

We are one nation – and their pain is our pain. Their dreams are our dreams; and their success will be our success. We share one heart, one home, and one glorious destiny.

The oath of office I take today is an oath of allegiance to all Americans.

For many decades, we’ve enriched foreign industry at the expense of American industry;

Subsidized the armies of other countries while allowing for the very sad depletion of our military;

We’ve defended other nation’s borders while refusing to defend our own;

And spent trillions of dollars overseas while America’s infrastructure has fallen into disrepair and decay.

We’ve made other countries rich while the wealth, strength, and confidence of our country has disappeared over the horizon.

One by one, the factories shuttered and

End of An Era: How The Deal Was Reached As Yahya Jammeh Finally Goes Into Exile From Gambia

Gambia: Yahya Jammeh No longer The President, Agrees To Step Down But Refusing To Leave Country, Gambia Army Joins ECOWAS In His Ouster