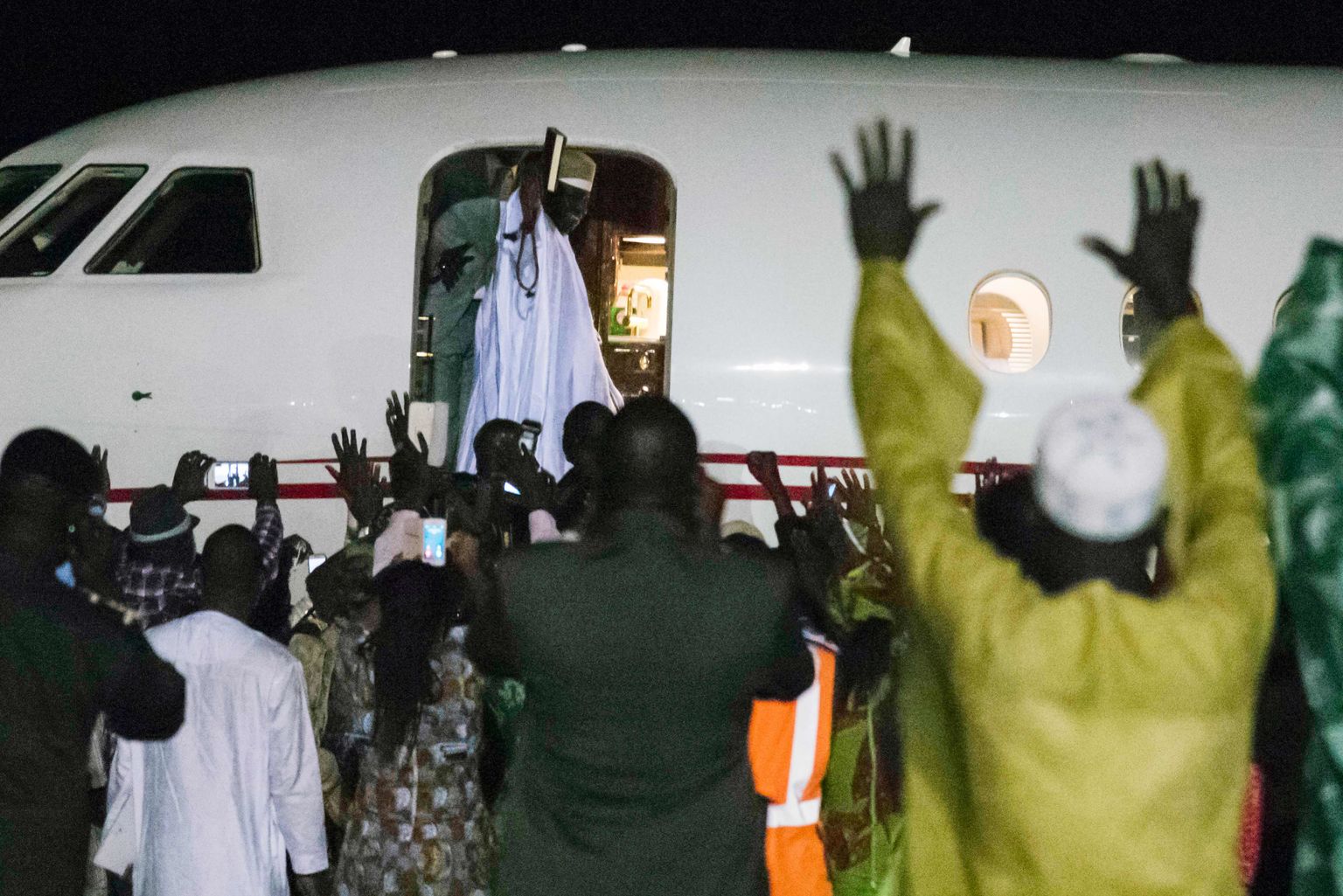 Following days of standoff and unprecedented tension, the former Gambian President and senseless ruler Jammeh who led the country for the past 22 years with iron fist finally bolted out ending the month long siege he made by ceding and rejecting December polls that saw Barrow win the presidency.

Jammeh had vowed to stay in power by all means before ECOWAS swang into action threatening to intervene with military force should he refuse to relinquish power. Barrow had to be sworn in as President in Senegal in desperate move.

Even after Barrow’s inauguration, Jammeh refused to stand down and it took personal intervention from Mauritanian and Mali presidents to persuade the long-time ruler to leave power and organise for his asylum.

Saturday might, Jammeh hid his disappointments in cosmetic smile aboard the jet to Conakry with his wife. It’s unknown where he heads and will be spending his asylum, however, what’s known is his 22 long reign is over and the Gambia can pick up the pieces to build new future with President Barrow.

#Jammeh just boarded plane with his wife and #Guinea president – flying to #Conakry, it seems. #Gambia 22 years, The End.

#Gambia #jammeh leaves. Still smiling. But at least he is gone. pic.twitter.com/PxhnzX563I

Soldiers crying, women sobbing as they say goodbye to #Gambia longtime leader #Jammeh who has boarded the plane. pic.twitter.com/1lKTd0DFqD

Here’s the joint declaration made by ECOWAS, AU and the U.N. for Jammeh’s power relinquishing:

1. Following the Decision of the Summit of the ECOWAS Authority taken on 17th December 2016 in Abuja, Nigeria, Mediation efforts, including visits to Banjul, were undertaken by the Chair of the Authority of ECOWAS Heads of State and Government, HE President Ellen Johnson Sirleaf, the Mediator, HE President Muhammadu Buhari and Co-Mediator on The Gambia, HE former President John Dramani Mahama, along with HE President Ernest Bai Koroma to mediate on the political impasse with Sheikh Professor Alhaji Dr. Yahya A. J. J. Jammeh.

2. Following further mediation efforts by HE President Mohamed Ould Abdel Aziz of the Islamic Republic of Mauritania and HE President Alpha Conde of the Republic of Guinea Conakry with HE Sheikh Professor Alhaji Dr. Yahya A. J. J. Jammeh, the former President of the Republic of The Gambia, and in consultation with the Chairperson of the ECOWAS Authority of Heads of State and Government, the Chairperson of the African Union and the Secretary-General of the United Nations, this declaration is made with the purpose of reaching a peaceful resolution to the political situation in The Gambia.

3. ECOWAS, the AU and the UN commend the goodwill and statesmanship of His Excellency former President Jammeh, who with the greater interest of the Gambian people in mind, and in order to preserve the peace, stability and security of The Gambia and maintain its sovereignty, territorial integrity and the dignity of the Gambian people, has decided to facilitate an immediate peaceful and orderly transition process and transfer of power to President Adama Barrow in accordance with the Gambian constitution.

4.In furtherance of this, ECOWAS, the AU and the UN commit to work with the Government of The Gambia to ensure that it assures and ensures the dignity, respect, security and rights of HE former President Jammeh, as a citizen, a party leader and a former Head of State as provided for and guaranteed by the 1997 Gambian Constitution and other Laws of The Gambia.

5.Further, ECOWAS, the AU and the UN commit to work with the Government of The Gambia to ensure that it fully guarantees, assures and ensures the dignity, security, safety and rights of former President Jammeh’s immediate family, cabinet members, government officials, Security Officials and party supporters and loyalists.

6. ECOWAS, the AU and the UN commit to work with the Government of The Gambia to ensure that no legislative measures are taken by it that would be inconsistent with the previous two paragraphs.

7.ECOWAS, the AU and the UN urge the Government of The Gambia to take all necessary measures to assure and ensure that there is no intimidation, harassment and/or witch-hunting of former regime members and supporters, in conformity with the Constitution and other laws of The Gambia.

8. ECOWAS, the AU and the UN commit to work with the Government of The Gambia to prevent the seizure of assets and properties lawfully belonging to former President Jammeh or his family and those of his Cabinet members, government officials and Party supporters, as guaranteed under the Constitution and other Laws of The Gambia.

9. In order to avoid any recriminations, ECOWAS, the AU and the UN commit to work with the Government of The Gambia on national reconciliation to cement social, cultural and national cohesion.

10. ECOWAS, the AU and the UN underscore strongly the important role of the Gambian Defence and Security Forces in the maintenance of peace and stability of The Gambia and commit to work with the Government of The Gambia to ensure that it takes all appropriate measures to support the maintenance of the integrity of the [Defence and] Security Forces and guard against all measures that can create division and a breakdown of order.

11. ECOWAS, the AU and the UN will work to ensure that host countries that offer “African hospitality” to former President Jammeh and his family do not become undue targets of harassment, intimidation and all other pressures and sanctions.

12. In order to assist a peaceful and orderly transition and transfer of power and the establishment of a new government, HE former President Jammeh will temporarily leave The Gambia on 21 January 2017, without any prejudice to his rights as a citizen, a former President and a Political Party Leader.

13. ECOWAS, the AU and the UN will work with the Government of The Gambia to ensure that former President Jammeh is at liberty to return to The Gambia at any time of his choosing in accordance with international human rights law and his rights as a citizen of the Gambia and a former head of state.

14. Pursuant to this declaration, ECOWAS will halt any military operations in The Gambia and will continue to pursue peaceful and political resolution of the crisis.