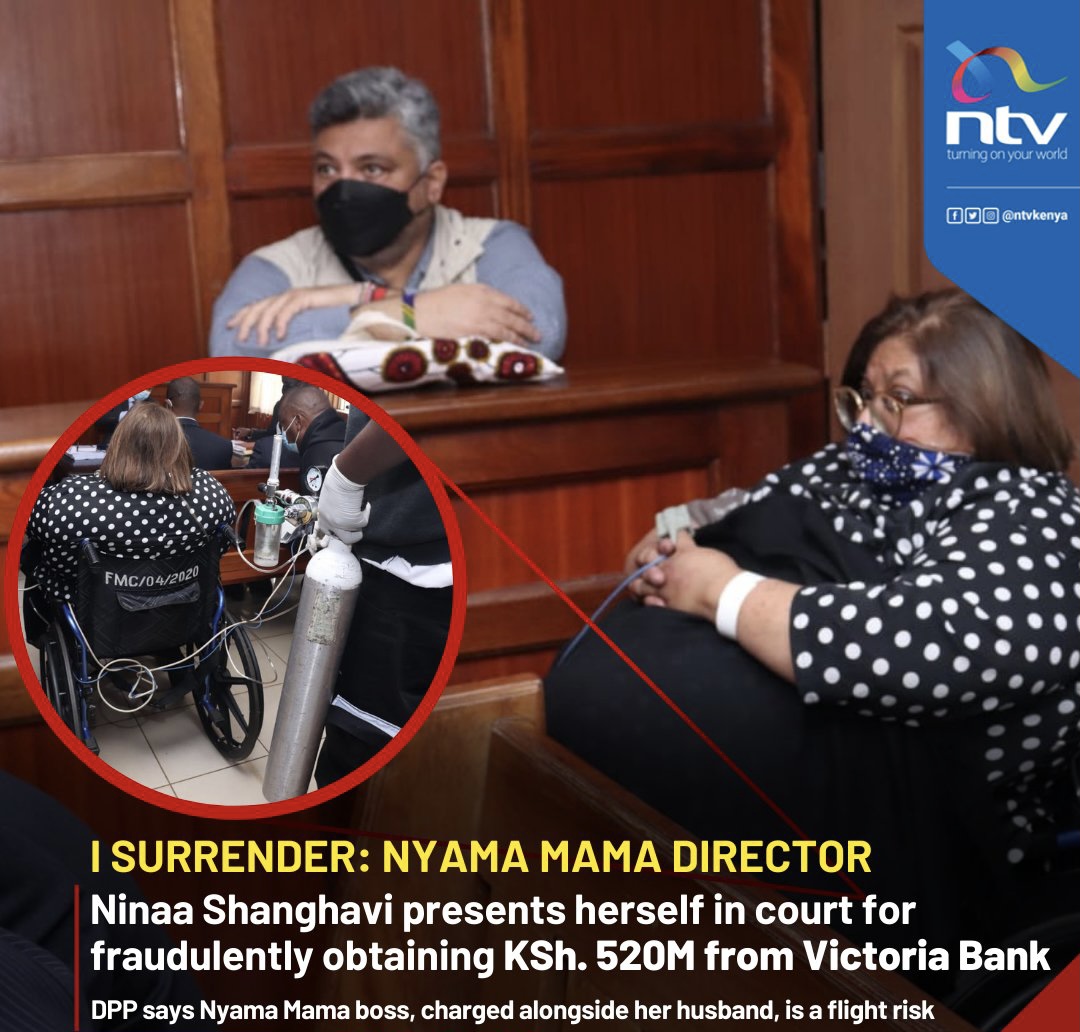 A co-director of the popular city restaurant Nyama Mama facing charges of fraudulently obtaining Sh520 million from a local bank will remain in custody pending a ruling on whether she will be released on bail.

Nina Shanghavi presented herself in court three weeks after a warrant for her arrest was issued after she failed to appear in court alongside her husband to face the charges.

Milimani senior resident magistrate Wandia Nyamu directed the accused who presented herself in court while on a wheelchair with an oxygen cylinder to be admitted at Kenyatta National Hospital, under the supervision of Lang’ata Women prison.

She denied the charges and the prosecution opposed her release on bail application, saying the accused had breached the previous court orders requiring her to appear for plea taking.

“The accused person has demonstrated that she has no respect for the court, because she had to wait until an arrest warrant was issued against her,” said the prosecutor.

Nina is charged alongside her husband Jayesh Umedlal who is out on bail.

The court heard that the accused persons wanted the bank to execute a first legal charge over Crystal Edge Apartment Number B2 erected on Land in Nairobi to secure a loan of Sh520,000,000 as a valuable security.

The court heard that they committed the offence on diverse dates between December 10, 2018 and November 2020 in Nairobi.

According to court documents, Jayesh and Nina are the two directors of the Good Earth Group limited which entered into an agreement with the bank and began borrowing loans from the bank from 2015 to November 2020.

Properties provided by the duo to the bank as security was of varied type and value, including properties owned by their company, bank deposits from their alien accounts among others.

Kenya Insights allows guest blogging, if you want to be published on Kenya’s most authoritative and accurate blog, have an expose, news TIPS, story angles, human interest stories, drop us an email on [email protected] or via Telegram
Related Topics:Nyama Mama
Up Next

Court Orders City Tycoon To Pay Sh4.7M To A Client After Breaching A Contract