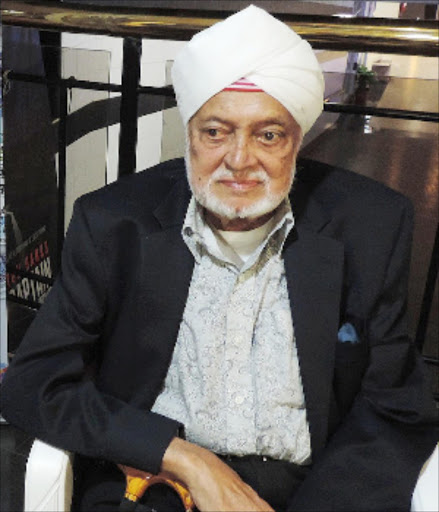 The man who had fenced off part of the playground for the Langata Road Primary School is a multi-billionaire with interests in construction, aviation, horticulture, property, tourism industry and fishing just to name a few.

Harban Singh Amrit could rank among one of the wealthiest Kenyans but his riches are linked to dirty deals stretching way back to the days of the founding father of the nation Mzee Jomo Kenyatta and later his successor Daniel arap Moi.

The man popularly referred to as Amrit in the Asian community in Kenya, is also believed to be behind the grabbing of large tracts of prime land in Nairobi together with the one time commissioner of lands the late Wilson Gacanja.

Some of the land he grabbed and the property he developed can be found along Waiyaki Way, Mombasa Road, the plush Lavington area, Westlands, city centre and upper hill area among others.

Investigations piecing together the properties owned by Amrit including some of which he has sold running into billions of shillings. We may not conclusively know how much Amrit is worth but his close friends, associates and family members confirmed that he is a wealthy man.

Some of the properties are landmarks in the country in which blue chip companies are housed leaving one to wonder whether they know the history associated with their acquisition.

He is credited with putting up most of the education institutions associated with Moi including the kabarak school and university in Baringo, Sunshine and Moi educational Centre in Nairobi and most of the school’s scattered all over the country named after Moi.

Due to his links to Moi he was the main contractor for the government and all the national cereals and produce board (NCPB) silos were done by his company.

Those who worked close with the businessman confess that he exaggerated the costs for each of the projects he did for Moi and ensured he made massive profits or negotiated for a bigger stake for himself.

A shrewd businessman who many say is a sweet-talker, Amrit is said to carry himself as an architect when in real life he is a draughtsman that surrounded himself with the best architects in the market whom he used to build his massive empire.

The businessman made numerous promises to speak to us regarding his wealth and properties but for more than a week he failed to honour any of our appointments.His excuse was that he was unwell.

The father of three boys is the man who owns the land and structures on which the three Safaricom houses along Waiyaki way now stand. The one near Sarit Centre and which hosts the Human Resources department is built on the grabbed land that belongs to the Nairobi Westlands City sub-fire station.

It is not known how Harban managed to get the land. But given that he was a close friend of retired President Moi and a confidante of the then lands commissioner it is no surprise that he could get all the prime land in the city.

The Safaricom headquarters where the chief executive Mr Bob Collymore sits is constructed on land belonging to the provincial administration. It is telling that next to the house are the offices for Westlands DO.

Ensconced between the Safaricom house and the Pizza Garden restaurant is a rather new skycraper, Skypark Plaza where the National Police Service Commission sit. This also belongs to the tycoon.

In Westlands area, Amrit is a joint owner of three buildings along Woodvale with businessman Manek Shah and former vice-president the late Prof George Saitoti. The value of these properties are believed to run into hundreds of millions at the current valuation.

Towards the Spring Valley police station in the same location is an imposing Hindu temple. The land on which the temple stands was grabbed by Harban Singh Amrit and the late Gacanja. It was then sold to the Hindu council by the two. We could not quantify how much the two made.

In Parklands area behind the Simba Union complex is another parcel of land that was grabbed by both Amrit together with another of his partners, Mukesh Gohil. The tycoon claimed that the land belonged to the Union to be used as a crematorium. However, there is no access to it and his attempts to negotiate with the Simba union to create a road have failed. When he made all these moves, Amrit was the chair of the Sikh Supreme Council.

Still in Westlands area and now along Rhapta road, he has an imposing office not far from the Rehema House. He has named his offices, Rehema House apartment. Amrit is the one who was asked to put up Rehema house for the National Fund for the Disabled of Kenya.

People who worked closely with him claim that he charged an arm and a leg for the building despite the fact that the funds were drawn from Kenyans to help the physically handicapped.

Further along Rhapta road are the magnificent Chelsea Park apartments that go for sh28 million for a three bedroomed apartment or sh140,000 per month. Harban Singh Amrit owns the land on which they stand. The parcel of land runs to the river which he ignored environmental advise to put up structures along a riparian area.

His massive home on the exclusive address along Riverside drive is a sight to behold. It is said the land was given during the Moi era with the help of the late Gacanja.

In the city centre, stands the View Park Towers along Uhuru highway and next to Utalii House. Amrit put up the glassy structure that has 20 floors for sh300 million. He sold the building to the National Social Security Fund (NSSF) for sh900million. Soon after it was sold, it was detected to have structural problems as cracks were found in the basement. This did not stop the tycoon from pocketing a cool sh600m.

His close associates disclosed that Amrit put up a penthouse for himself in View Park Towers where he would receive politicians and dish out favours and also cut deals.

That was not the only business he transacted with NSSF. His company, Harban Singh Associates was given a contract to put up a parking complex for the workers fund at community. For years, the parking was never completed. But Amrit and one of Moi’s sons made at least sh1 billion from the fund.

Between Utalii House and Kenindia Insurance building is a parking space. It bel;onged to Amrit and he sold it to the Kenya Methodist University. We could not verify how much he made from that sale.

At Upper Hill in Nairobi, land that belonged to the East Africa Community believed to be seven acres was taken by Amrit.

Along Langata road behind the now controversial Langata Road primary school is the Airport View Villas. They stand on land that once belonged to Kenya prisons. The four acres are believed to have been Amrit’s reward from Moi for putting up Sunshine School.

Away from land, the tycoon also has interests in the tourism sector. If you are driving into Nairobi along Mombasa road, the new fly-over for the Southern by-pass is the Eka hotel. The one-storey five-star hotel is the property of Harban Singh Amrit. It sits on one of the many parcels of land he owns along the road.

In Amboseli national Park is the Oltukai Lodge. The literature on its website says that the lodge is “one of the best spots in the world to watch elephant with the backdrop of Africa’s highest mountains, Mount Kilimanjaro”. This is just one of the outstanding properties in the tourism sector that belong to Amrit.

In Mombasa, the tycoon had interests in Castle hotel, along Moi avenue. However, it is said he sold his shares.

Perhaps it is his need to fly his clients to Amboseli and Mombasa that he is also the proud owner of a hangar at Wilson airport.

In farming, Harban Singh Amrit, has not been left out of the flower business that thrives along Lake Naivasha in the rift valley. He owns the Aquila flower farm. It sits on 300 acres of land that originally belonged to Agricultural development Corporation (ADC).

Further afield in Lake Victoria, Amrit set up a shipping business and gave it to his one of his three sons to run it together with a friend Sharad Patel who produced the block-buster movie on Ugandan dictator, the Rise and fall of Idi Amin.

It is not just in Kenya where the tycoon has property, he is said to own real estate in New Delhi where one of his sons lives and takes care of his interests.

Now in his early 80s, Amrit is said to have slowed down in life. But it is not strange to find him every other weekend doing “koroga” (communal self cooking) at the Nairobi Gymkhana Club along Forest road in Nairobi.