The 2010 Constitution of Kenya was a turning point in country’s history as it reconfigured balance of power by devolving power and responsibilities from the national government to 47 elected county governments.

But the final fate of the Governor’s impeachment lies on the hands of the Senate who have the final verdict.

At the National Assembly or the Senate uncountable times Kenyans have witnessed the level of brown envelope philia when it comes to bills or motions of or involving corrupt individuals whose cases suddenly disappear with or without evidence. Like they say, “Why hire a lawyer, if you can buy the Judge.”

From cafeteria lobbying, wash-room handouts — has been the game to silence the hungry majority since Parliament is a game of numbers. We’ve seen how Rai sugar investigation report vanished in thin air after MPs were literally bribed to bury alive the case. Members of Parliament received as little as Sh10,000 (100$) in the toilets to shoot down a controversial sugar report. Other legislators were handed bribes in Parliament’s new restaurant and car park ahead of the chaotic afternoon session that saw the report on the sugar scandal, which was prepared by members of a joint Agriculture and Trade committee, defeated on the floor of the House. 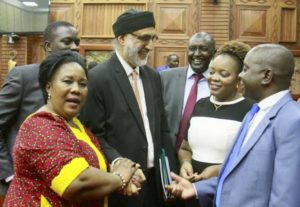 Rai the beard ‘gang’ being received ceremonially by those who’re suppose to grill him. 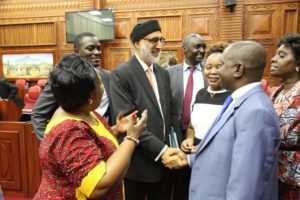 When (Jaswant) Rai appeared, they were lining up to shake his hands. Have you seen a judge leave his seat to go hug a suspect?

Literally no single substantive case before the Legislatures committee involving investigations of corrupt bigwigs has ever been found guilty. They also say, “ You’re either at the dinner table as the dinner or the waiter.”

However much some of the calls for impeachment are justifiable — majority are pure witch-hunt over failure to secure a VIP space at the dinner table.

Apparently, cases of Governors impeachment in Kenya by MCAs has been on the rise and in cases where the BBI brothers —President Uhuru or Raila Odinga have intervened on one on one a-tête-à-tête with the MCAs, we’ve seen total calmness to normalcy and which authenticates that some of the MCAs press impeachment button for attention seeking.

In some cases, the MCAs have been bribed by the Governors and have settled the dust. It has been hooting hell out hunger and thirst for money and not genuine oversight.