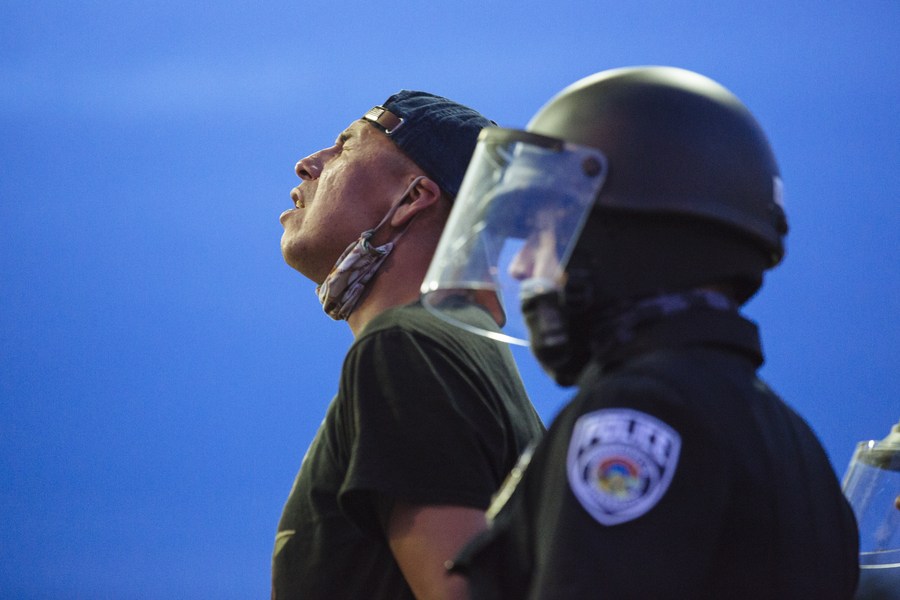 Ever since its founding, the United States has presented itself as a shining city on a hill—a nation in which liberty and fundamental freedoms thrive and an example for the rest of the world.

It is a mythology refuted by American history. And today, killings of African Americans that continue with impunity, systemic racism across institutions of U.S. life, and official violence against Black Lives Matter protesters once again demonstrate the hollowness at the center of American exceptionalism.

Still, many embrace the image of an exemplary, exceptional America. Even those who see the fault in the metaphor of a shining city may argue that the United States has historically played a positive global role for human rights. After all, it helped build the postwar global human rights system, drawing in part on constitutional protections Americans enjoy. It led the negotiation of the United Nations Charter, which makes the pursuit of human rights a fundamental purpose of the global organization. Former U.S. first lady Eleanor Roosevelt chaired the U.N. committee that drafted the Universal Declaration of Human Rights in 1948. Human rights policy has been built into the structure of U.S. diplomacy since at least the administration of President Jimmy Carter, however inconsistently, if at all, some presidents have been committed to it.

Yet even so, the phrase “human rights” in American policy has almost always referred to what others violate, and it rarely comes back to what the U.S. government is obligated to protect at home. The United States may use the language of human rights law to condemn official abuses against minorities worldwide, or violence against protesters in Venezuela, Hong Kong, Iran, and elsewhere, but it bristles when those same norms are deployed against it.

Related Content:  JohnBosco: Why Government, Examination Bodies and Private Hospitals Are To Blame For Quackery In The Medical Field.

Despite its rhetoric and its occasional leadership, the United States has long had its foreign-policy foot inside the human rights system and its domestic one firmly outside. Treaties and other international obligations that it calls upon others to keep are not even enforceable within the United States itself.

If human rights are so important that the United States makes it an official feature of its diplomacy, why have Americans not applied it to their own government?

The answer is simple and well documented. Racism and white supremacy drove the American refusal to enforce human rights at home, and that legacy of hypocrisy shapes human rights policy today.

At the outset of the modern human rights movement, segregationist Southerners and their allies fought against U.S. engagement with the U.N. human rights system. They saw human rights as a threat to segregation, to its oppressive system of official racist violence, to the inequalities of Jim Crow. They worried, rightly, that the U.N. human rights bodies would, if they had the authority, put pressure on the United States to end its systemic racism.

As a result, when the United States ratified major human rights treaties on civil and political rights and racism, the Senate demanded that they not be applicable in U.S. courts absent further legislation, which senators knew would not be forthcoming. It’s true that the United States comes under periodic evaluation at the U.N. Human Rights Council and in the few treaties it has ratified, but such reviews hardly receive attention or have much impact domestically.

In the decades since, U.S. resistance to human rights has extended beyond its racist origins. Some argue that international human rights law has always been too ambiguous and too politicized to be implemented consistently by governments. The American right has taken to arguing that human rights treaties are an effort of global elites to undermine U.S. sovereignty. Indeed, this was the argument against the Convention on the Rights of Persons with Disabilities, a treaty negotiated by the administration of President George W. Bush that basically implemented U.S. law on a global scale.

MCAs Have Turned Impeachment An Oasis.