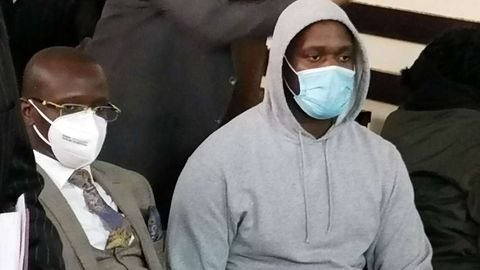 Obure and Ouko appearing before the court.

Chris Obure and Robert Bodo Ouko are set to go under murder trial on Monday. While the plea taking was set for Friday, it failed to take off following an objection from the DPP.

When the suspects appeared at the High Court, the prosecution side led by State Counsel Gikui Gichuhi said the suspects could not answer the plea as their mental capacity to take the murder charge was yet to be ascertained.

Justice James Wakiaga, in his Friday ruling, directed that the two suspects be taken for mental assessment at the Mathare Mental Hospital in Nairobi during this period.

When they were produced at a magistrate court in Kibera on Friday, principal magistrate Derrick Kuto heard that detectives had concluded investigations into the fatal shooting that happened on August 22 at Galana residential suites apartment in Kilimani.

State prosecutor Karimi Kajuju told court that the detectives had pieced up the case and were ready to proceed with the murder case.

During the investigations, police cybercrime unit has been reviewing and analysing multiple surveillance footages of two buildings in Kilimani estate.

Some of the video footages relate to offices of a private company known as Glo-Jet, situated at Senteu Plaza, where the firearm used in the shooting was recovered by police officers.

Other footages are related to Galana residential suites, the scene of crime where the victim is said to have been shot by his friend Ouko after having dinner alongside friends and relatives.

Investigators were also focusing on the ballistic examination of the firearm used in the killing and obtaining its records from the central firearm bureau.

The suspects have been in remand since August 23 when they presented themselves to the authorities, while police have been recording statements of key witnesses of the incident.

While making the miscellaneous application to hold the suspects in custody for a longer period, the investigating officer Bashir Boya in a sworn affidavit made a revelation that gives the whole case a new twist, he revealed that the firearm used in committing the said killing belongs to Chris Obure, who is not a licensed gun holder.

In what is suspected to be a card play by Obure, CCTV footage from his office was leaked exclusively to Citizen TV that showed the movements of Bodo before and after the shooting. An accompanying Twitter hashtag further went to bomb timelines with tweets claiming Obure’s innocence. It loudly said that Bodo had stolen the gun from his boss’s office.

Sources privy to the investigations intimate to Kenya Insights that Obure is being treated as a suspect given his business relations with the deceased and detectives have been piecing up evidence to ascertain their links. Omwenga who was partly a car dealer is also said to have been involved in scamming activities with Obure and the two had clashed over one deal that was sealed in March worth over Sh300M according to media reports.

Robert Obure, the prime suspect who shot Omwenga and told police that it was accidental is a personal assistant and bodyguard to Chris Obure. Detectives have been patching statements and evidences to drive at the motive of the murder. The key questions have been, who would’ve wanted Omwenga dead and why? That’s why the investigations on Obure have been extended to his past criminal records which include misuse of firearm, assault and scamming people.

Detectives believe that their was a scaffle before the fatal shooting and that Bodo is suspected to have been acting on the Boss’s commands.

In a turn of events, the released CCTV footage appears to place Bodo at the crime scenes and attempts to exonerate Obure. The detectives are not concentrating on the shooting particularly but the circumstances surrounding the murder and that’s why Obure is at pains to expunge himself. While he didn’t pull the trigger, detectives believe he had a major hand in the execution including planning.

Obure in his defense has said he wasn’t party to the murder and was unaware that his gun had been taken from the office.

The CCTV footage paints a picture of premeditated murder, Ouko is seen in Obure’s office taking the gun at 6:25am 21st August and returning it later in the night at 11:54pm after committing the crime.

Picking up the gun in the morning clearly shows it was meant to serve a purpose. It was either to guard his boss as part of his services or to commit a crime in this case the murder. Events of the day don’t spot the two together and no direct phone communication which is unusual for Obure and his assistant, in his statement, Obure said he spent the day holding meetings at a hotel in Upper Hill. Other accounts also claim that Omwenga and Obure had an altercation in a hotel in the same area.

Ouko who’s seen taking instructions from an end on a walkie talkie appears to know his way around the office, on instructions, gets the key to the gun’s safe from Obure’s desk, picks up the gun and leaves office before anyone came in. What happens after this in the office is not shown and the subject of detectives who’ve been studying the evidences.

Did Ouko steal the gun from his boss as alleged? Or he was baited? It is unconvincing that with the full knowledge that the office is fully fitted with motion detectors and CCTV, Ouko would’ve gone in to steal, he had the entrance credentials. He appears as someone working on instructions to pick up the gun for a mission. He knew he was being captured on camera. While he’s not a licensed firearm holder, his perfection in handling the gun tells he’s used to it.

It beats logic that Ouko could ‘steal’ the gun and return it fully aware that the cameras were capturing all his moves. It can also be theorized that this could’ve been a master stroke to place Ouko in the scenes, send him to collect gun, return, get him on tape for the drama later which would go to affirm the assumption of premeditated crime.

While it’s a task nailing Obure to the crime scene he’s being roped in as an accessory of murder since his weapon was involved. It’s also being assumed that being his bodyguard, Ouko was working on his orders and that’s why his business relations and communications with Omwenga have been of scrutiny. A conspiracy also alludes that the main intent wasn’t murder but to scare Omwenga into submission, the gun was to threaten him and that’s how Ouko claimed he shot him accidentally.

The CCTV footage whose purpose seem to only have been intended to exonerate Obure and nail Ouko can’t be used entirely to prosecute the case without inputting the circumstances surrounding the death. Such evidences are meant to sway public’s perception and distract investigations, it’s obvious the DCI have watched all the tapes.

Different witnesses have been interrogated and it’s only if their statements corroborate that one’s innocence will be pronounced. As it stands, the DCI from their investigations believe both the suspects were involved in the murder according to evidences gathered.

Big question that investigators have to prove is whether Ouko acted alone in the murder and why or did he take orders from Obure and if so will he testify against his boss because as it looks, the boss is pushing hard to remove himself at all costs including throwing under the boss his bodyguard.

The two will stand murder trial and take plea on Monday.

Who Is Rwanda’s Paul Rusesabagina?