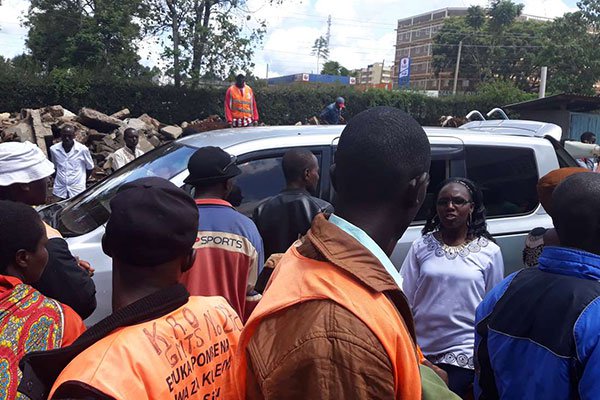 This is my husband! Three women in Kerugoya had strongly stood up for a fight to bury the dead bodaboda rider who had died.

The physical and  verbal confrontation at the Kerugoya referral Hospital Mortuary in Kirinyaga County hit many mourners who had arrived to bid the farewell to the late rider by a surprise.

On Wednesday, the trio wrestled as they struggle to sign the burial permit for the deceased Peter Mwangi. The deceased was involved in an accident last week.

Janet Wambui, Lydia Wanjiru and Susan Wakuthii, shunted each other out of the way as they fought to get into the morgue. The fights send the mourners into a running spree.

It took Police force to move in to separate the aggressive women. The fight was violent that forced the Police had to cock their guns.

“I’m the first wife of Mr Mwangi and I must bury his remains,” shouted Ms Wambui.

“It is my right to bury my husband and no one should block me,” said Ms Wanjiru.

“I had to rush to the mortuary and stop my alleged co-wives from taking away the body of my husband,” Ms Wakuthii said.

Shocked mourners stood at a distance watching the scuffle unfold. The police have ordered the mortuary attendants not to release the body until the fighting parties came to an agreement.

Kenya Insights allows guest blogging, if you want to be published on Kenya’s most authoritative and accurate blog, have an expose, news TIPS, story angles, human interest stories, drop us an email on [email protected] or via Telegram
Related Content:  KRA To Take Up Sh6.7B From The Sh8.5B Awarded To Zakhem International In Row With KPC
Related Topics:bodaboda riderkerugoyakerugoya policewives
Up Next