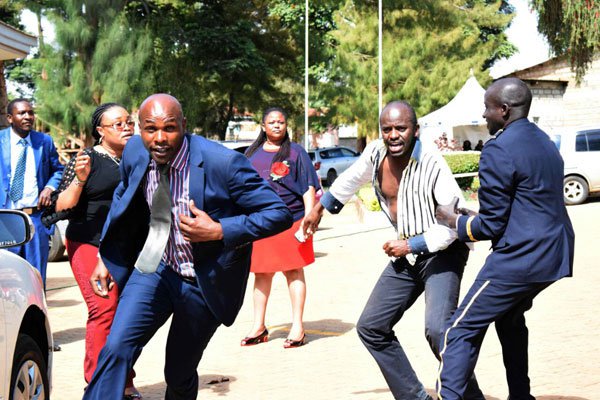 In Kenya, a highly polarized and tribal country, winning a party ticket in its dominant region amounts to getting elected in the general elections. It is for this reason that party primaries are so it die especially in the strongholds. The political heat in the country is currently roasting with violence reported across the country.

ODM kicked off their primaries in the past days, and it has not been any smooth with rigging claims and also violence reported but this is not surprising not just on ODM but all parties, chaos, favoritism, violence and rigging claims has often been a trademark of the nominations.

Jubilee’s primaries kicked off Friday morning, and despite President’s warnings and Tuju’s endless assurances of smooth nonviolent nominations, things haven’t been as predicted with early signs of disasters, polls have been called off in certain areas.

One would as just how democratic is the party nomination of candidates, do voters or the party itself get the intended leader with imposing fears floating around. In Busia, Otuoma accused election officials of rigging him out of ODM ticket for Incumbent Ojaamong. But just how sure are we that Otuoma was voted clean as he claims. There are claims that Otuoma is a Jubilee mole this is about him and Ababu Namwamba ditching the party for Labour Party which has since paid allegiance to Jubilee. In essence, it is expected that party candidate is nominated by party members, but there’s a big loophole in the system that has allowed party nominations to be infiltrated by enemies of the party.

Parties rely on IEBC register during nominations leaving the door open for anyone to vote for any candidate regardless of their initial affiliation. It is easier, for example, a Jubilee candidate to sponsor voters to field in a weaker ODM candidate in their primaries to give them an easy run during the general elections. There’s no clear separating factor to lock out dishonest elements from infiltrating nominations and take advantage. It is for this reason that nomination tallying don’t necessarily tell the popularity of said candidate.

Loopholes in the system give fraud elements to vote more than once; you’d not be surprised to hear cases of people who would’ve voted thrice this year, and this is simple; one can participate in ODM primaries, next week on Jubilee’s and during General election.

Jubilee party knew of this critical loophole and attempted a game changer, voting smart card, this would ensure only registered members of the party to participate in the primaries, therefore, locking out nonmembers from invasion. You’d be interested to know that even Jubilee’s opponents bought the cards in bulk and registered their own, this was in readiness to infiltrate the voting during Jubilee’s nominations. This is telling you in plain that opponents take advantage of each other during nominations. The Smart card which fetched almost Sh200M for the Jubilee party has since been called off and remains one of the biggest scams in the party. Jubilee is playing the traditional electoral fraud as well.

Nairobi nominations which were scheduled for Friday have been pushed to Monday with the party citing that Friday would interfere with prayers for the Muslims. You wonder why they didn’t factor this in during the scheduling and why voting goes on sale Friday in other areas including neighboring Kiambu. With the voting loophole that I’ve elaborated above, those who’ve voted in Kiambu, Murang’a et al today Friday, could quickly come to Nairobi on Monday and vote without any detection. Now read the game plan if there’s any.

Related Content:  EXPOSED: Quickmart Supermarket On its Death bed - A snake in the grass.

Summarily, Kenya is yet to acquire full democratic party nomination process, so many loopholes still exist for manipulation. People lie, numbers don’t but not all the times.

Safaricom Lost Sh2.6B During System Shutdown And Why It’s Market Dominance Is A Threat To The National Security