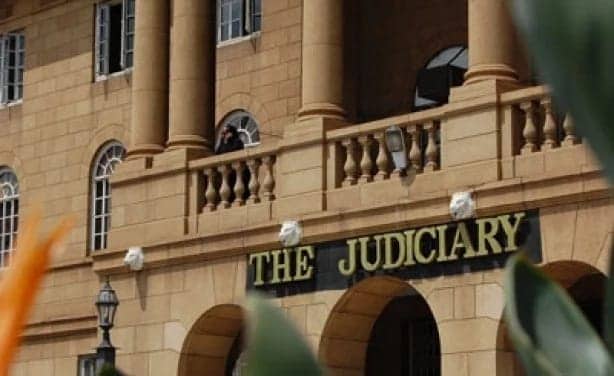 Chief Magistrate Godfrey Hillary Oduor was on Wednesday found dead in house where he has been cohabiting with a woman since November in Nairobi.

The lady is reported to have returned from work on Wednesday evening and found the house locked from inside. On trying to look through the bedroom window, she saw Oduor seemingly asleep but with foam in his mouth.

Officers from Makadara Station responded to the distress call and on breaking in found him dead.

The body is now at City Mortuary awaiting postmortem and further investigations awaits.

Oduor who headed the Limuru Law Courts, was moved in the same capacity to Nakuru Law Courts where he served for a short period before being moved to Kisumu Law Courts.

He was also the judge who acquitted Pastor Paul Ng’ang’a was charged with dangerously driving after his car crashed head-on with a Nissan in 2015 in Limuru killing a woman.

Nganga was acquitted alongside three other co accused Simon Kuria, Inspector Christopher Nzilu and Inspector Patrick Baya, by a Limuru court on Monday.

Chief Magistrate Godfrey Oduor acquitted Nganga who had been charged with dangerously driving a Range Rover and causing the death of Mercy Njeri on July 26, 2015 at Manguo on the Nairobi-Naivasha highway

The pastor was also charged with failing to report the accident involving his vehicle and the other – KBZ 709W – to any police station within 24 hours.

On the third count, he was charged with giving false information to a police officer.

He also faced a charge of driving an uninsured car since the car did not have a policy in respect to third party risk at the time of accident.

The fifth count brought together the four, which was that they conspired to defeat justice whereby, between July 26, and August 15, 2015 in Limuru, they jointly conspired to mislead a police officer at Tigoni Police Station to defeat the course of justice.

Count six involved Kuria, who had initially confessed that he was the one driving the car when the accident occurred.

Nzilu, and Baya who were both police officers were charged with neglecting official duties.

According to Oduor, there were inconsistencies and discrepancies in the time of accident and that the claims, some which he said were strange, concocted or exaggerated on the pastor being at the accident scene and which were not in the initial police statements, making them inadmissible.

Interior Cabinet Secretary Fred Matiang’,on Tuesday, wrote to the Director of Public Prosecutions (DPP) Noordin Haji to appeal the acquittal, saying the government is not satisfied with the ruling, arguing that evidence implicating the pastor was overwhelming.

Haji appealed the acquittal to which Ng’ang’a requested to be annulled. Kiambu High Court declined and the case is now active.

Kenya Insights allows guest blogging, if you want to be published on Kenya’s most authoritative and accurate blog, have an expose, news TIPS, story angles, human interest stories, drop us an email on [email protected] or via Telegram
Related Content:  DCI Gives Wanjigi 72 Hours To Surrender His 11 Guns, 485 Ammunitions
Related Topics:
Up Next