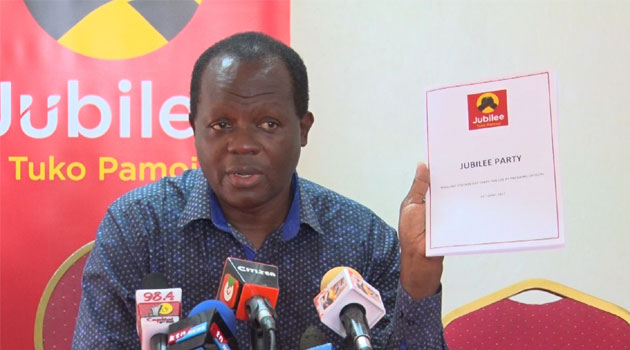 Jubilee Party announced the decision to pull out of the Mswambweni parliamentary by-election on Wednesday a week after calling upon its members to submit their applications.

The decision announced by Secretary General Raphel Tuju on Wednesday afternoon came a day after Deputy President William Ruto made an unannounced visit to party headquarters where sources indicated he went to check on the progress of the selection process.

Tuju, in a statement to newsrooms, said the ruling party had elected to allow ODM to contest the election unchallenged given the opposition’s cooperation with Jubilee in parliament under the Building Bridges Initiative co-headed by President Uhuru Kenyatta and ODM Leader Raila Odinga.

He said the party was also focused on addressing the constitutional crisis triggered by Chief Justice David Maraga’s advice to the President to dissolve the Parliament over unattained two-third gender rule.

Tuju said aspirants still interested in vying for the seat left vacant following the death of Suleiman Dori, the area MP elected on an ODM ticket but later became an ardent supporter of Ruto, could do so using other avenues.

Kenya Insights allows guest blogging, if you want to be published on Kenya’s most authoritative and accurate blog, have an expose, news, story angles, human interest stories, drop us an email on tips.kenyainsights@gmail.com or via Telegram
Related Content:  ICC: Case Against DP Ruto Could Be Revived
Related Topics:
Up Next

Stop Copying Me, Alfred Mutua Blasts Mudavadi For Stealing His Strategies And Ideas