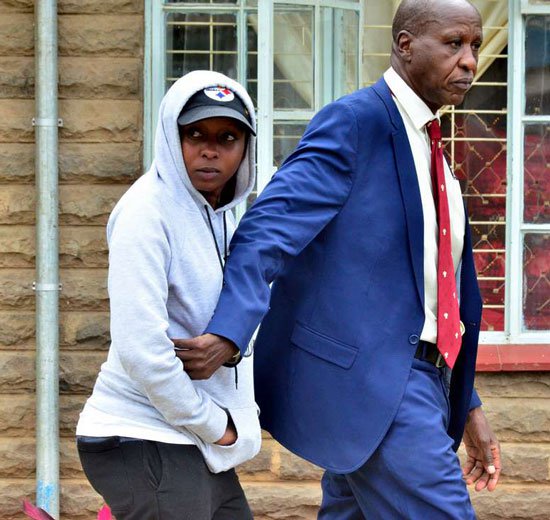 Jacque and her father Maribe escorting her to the Kikimani police station for questioning.

New details continue to emerge on the trending amdnmost complex murder in town. Jacque Maribe’s dad has raised fears over the life of her daughter should she confess against the prime suspect Jowie who was also her fiancé.

In a new deal, Maribe’s legal team had plotted to negotiate a deal and turn her into a state witness but it won’t be as smooth. Her dad, Mr Maribe now says her daughter’s life will be put in danger and forever live in fear should she testify against Jowie given that he has his accomplices roaming free and would pounce on her daughter. This comes at the backdrop that Jowie’s foreign partners flew in the country on his arrest in a bid to save him backed with local shadowy characters.

Mr Maribe admitted that Mr Irungu was his daughter’s boyfriend, but claimed they were not in good terms.

On September 20, a day after Ms Kimani’s murder, Ms Maribe had a major fallout with Mr Irungu at an upmarket bar when he went to pick her up, according to the father’s version of events. It was also this bar that Irungu mentioned in his statement. He was just from the murder scene supposedly.

Mr Maribe claimed that his daughter wanted to end the relationship. “She asked Irungu to return her car keys and ATM card. Even when they went back to the house, Jacque threw some of his clothes out. The man threatened to kill himself after Jacque said she would leave him. He borrowed a gun and shot himself,” Mr Maribe claimed.

But Mr Maribe said he did not know what prompted the argument between the two but speculated that it may have been “normal issues that young relationships face”.

Initially, the news anchor had told police that Mr Irungu was shot by a gang outside her estate in Lang’ata. But when asked why the daughter gave contradicting information to police regarding the incident, Mr Maribe attributed it to love.

“She may have felt responsible for his attempted suicide. At that time, she did not know about Monica and her connections to Irungu,” said Mr Maribe.

Mr Maribe, a two time Kiharu constituency parliamentary aspirant, said he knew Mr Irungu since he had visited his home with Ms Maribe twice or thrice but he had no idea where he worked. “She is an adult and I was not following much about their relationship. I even heard of their engagement over the media,” said Mr Maribe.

On her status at the police station, Mr Maribe said he visited her on Friday and that she was in good health, relaxed and “her conscience clean as she was innocent”.

She said given the way he brought her up, she was “disciplined” and not the type of a girl who could sit down to plan any crime, leave alone murder. “If she had bad manners, she could not have reached to the levels where she is right now,” he said of his daughter’s career.

Jowie drove into Monica’s apartment in Maribe’s car, used a fake ID which is said he picked from Maribe’s gate in Lang’ata, police are also saying the knife used in the crime scene was from Maribe’s kitchen and the suicide attempt that would later be reported as a shooting by thugs happened right in her bedroom and a live bullet left.

Related Content:  Kenya Pipeline Had Budgeted Ksh16Billion But Plan Ended Up Costing Ksh52B Plus In The Scandalous Deal With Zakhem International

Just what indeed was Jowie’s intentions by leaving all the trails to Maribe and dropping everything at her doorstep. It can only be speculated that she was either an accomplice or smartly fixed in the murder by Jowie. Nothing is clear as the more time moves, more script shifts, however, what’s apparent is Maribe would’ve naively implicated herself in the murder thinking she was hiding a suicide attempt from a domestic brawl not knowing of the murder or maybe she did.

It can also be speculated that reason for Maribe asking out could’ve been linked to infidelity and that’s why he tried to introduce a crime of passion angle by leaving trails to Maribe in the crime if at all that was the case. He’s described as a manipulative and psychopath who could do anything.

‪KRA Boss Njiraini Entangled In A Tax Evasion Scam On Undervaluing A Sh2.93 Billion Property Paying Only Sh160 Instead Of Sh29M‬