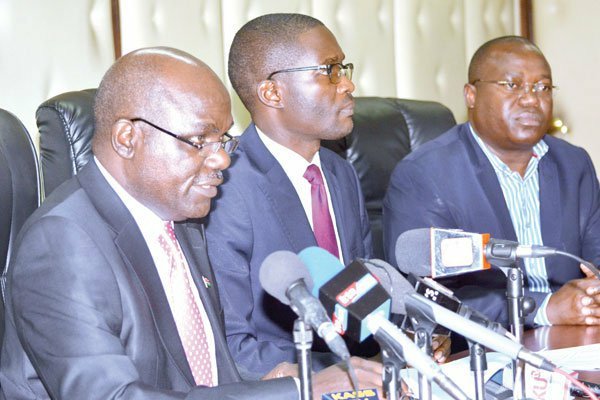 Chris Msando on the extreme right with IEBC chairman and CEO

The Independent Electoral and Boundaries Commission’s director for ICT has gone missing hours before the public testing of a results transmission system today to avoid a repeat of the 2013 polls technology failure. This comes hours after the IEBC announced it will publicly test the results transmission technology in 47 counties in line with the law. The ‘Kenya Integrated Elections Management System’ incorporates voter listing, electronic voter identification, and electronic relay of results.

The breakdown of some of the gadgets in the 2013 poll was at the heart of Raila Odinga’s petition challenging the declaration of Uhuru Kenyatta as President. Mr. Msando assumed the position end of June following the suspension of James Muhati, who was the ICT chief. Mr. Muhati was sent on compulsory leave on May 27 following accusations that he had refused to cooperate in an ongoing audit of the 19.74 million-people voter register. Consultancy firm KPMG carried out the audit. He would later be reinstated silently.

Msando: These gadgets will work 100%. We have learnt from the mistakes of 2013 #OpinionCourt

Kenya Insights gather from different sources at Anniversary Towers that Msando’s efficiency as an IT guru could be his greatest undoing. Holding a key docket in the voting system that is marred with suspicions of plotting to manipulate results, the ICT boss has been a major person of interest. Msando is quoted saying unlike 2013 where the gadgets and systems were deliberately failed to allow for the manual voting, such a case scenario would never recur in the August election.

Msando: Only results of those voters identified by this kit will be electronically transmitted #OpinionCourt

Insider politics and elements within IEBC haven’t been comfortable with Msando with petty angles as his ethnicity. IEBC is divided with elements rooting for credible results and others hell bent to sabotage. We’ve learned that despite having cream IT gurus, IEBC curiously contracted Alex Kioni the son to Jeremiah Kioni (Mudavadi’s running mate in 2013 elections) as an external IT security consultant.

Msando: We have used the highest level of encryption, so no third parties can intercept and decrypt the messages transmitted #OpinionCourt

Alex Kioni worked at IBM East Africa as a cyber security manager but resigned following a discovery by IBM. Alex has since advised for the IEBC database to be secured using the Oracle system, which essentially locks the data therein Protection of the network through IBM Q-reader system that creates a firewall that monitors/safeguards IP addresses. Such measures essentially mean that the IEBC systems are ‘technically’ ring-fenced from outside access.

Msando: If an individual attempts to vote twice, the system displays a warning message (as circled) and an alarm tone #OpinionCourt pic.twitter.com/86xsPLnYBq

The pressure was mounted to have missing Msando kicked out and be replaced with a ‘regime friendly’ Kioni. It raises suspicions as to why IEBC want to replace its staff with a private business consultant who stands accused of misconduct by IBM. Msando is said to have been the man behind the new IEBC KIEMS hack-proof system that will ensure dead voters don’t comr out of their graves to vote as it has been ghe tradition. Msando was termed as nonfriendly by the evil forces out to sabotage the IEBC system and rig election. Kioni is deemed to have the right technical skills and right ethnicity for the advantage of electoral saboteurs.

It will be impossible for a dead voter to wake up from his grave, vote and return to the grave ~ Msando.#IEBCPresser pic.twitter.com/lk8dXNdfXe

Although Alex Kioni quit employment at IBM East Africa in acrimony, he has since patched his relationship with the company’s management because (1) he is giving them very good business through the purchase of the IBM Q-reader system from the company.

How To Circumvent The Internet Shutdown In Kenya During Election