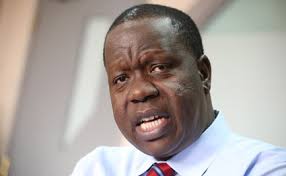 Peace is definitely what everyone is opting for but where the Peace preachers and Ambassadors led by Julie Gichuru miss the mark is failing or ignoring to address and settle Real issues that trigger Our peace dream to become a fallacy. Preaching peace is like Singing Acapella without instrumentals, not tantalizing. The price to pay for Peace with less than 2 weeks remaining to General Election is not affordable to us.

Temporary Interior CS Dr.Fred Matiang’i who holds Education and Interior Affairs dockets at the same time has to know Education docket is totally different from Interior affairs which take many portions on security matters. Perhaps this is the man I believed all along to be the most innocent man in Jubilee administration. From his last order, https://youtu.be/FvhHc52Lvns abolishing Oppositions democratic plan to protect their votes from scavengers through ‘Adopt-a-polling station’ mechanism has convinced me that best position for him is Education docket. Measures and policies he applies in Education ministry when dealing with Pupils and students have been successful and thumbs up forever but Security matters are not handled like dealing with Pupils and Students, it’s mixed-up and advanced.

Could this be the major reason why more and more procurement and importation of multi-million Shanghai made armoured personnel carriers at a time when Nurses are 50+ days on street demanding for better pay, multiple military and police recruitment is going on at this wee hours as government continues to water down Opposition plans in matters election because that mission is not a walk in the park. Now, these are the issues Peace Ambassadors ought to address not singing lullabies.

The Presidency is the site of libido and area of much concern than any other seat. 87% of Opposition NASA supporters according to latest polls released by IPSOS don’t believe the referee Independent Electoral and Boundaries Commission(IEBC ) is up to the task to conduct free, fair and Credible elections. If you do the math for 87% of the 10million who sincerely are likely to vote in opposition decide enough is enough from government frustration, nothing other than turmoil is expected.

Before Matiang’i would have made ‘I know it all’ Order, he should have considered Behaviour choice of these large number of Angry and hungry jobless youths who are watching their votes being staggered with, being that mechanisms ought to be put in place to protect them are being sidelined by misuse of Power. Security department taking too much interest in IEBC decisions and schemes speaks louder words of government overshadowing its power. IEBC as an Independent body should be heard louder than any other person at this time, it must show us it’s truly loaded with its own water tank to counter and buffer the inferno by delivering Credible, Free and Fair elections.

Adopt a polling station according to my awareness is to be carried out by 450,000 Vigilant Volunteers across the 41,000 polling stations and which cost Kshs10,000/- to Adopt a single station hence Ksh410,000,000/- is being contributed through paybill no 991444.These volunteers are to help in Voter turn out to exercise by accessing voters that will fail to report and being watchdogs over malpractices.If you are a fan of Movie Series, try to access ‘Designated Survivor’ you will learn how State house matters and President Cabinets work.

Related Content:  IEBC To Block Politicians Participating In Harambees From Contesting In 2022

We are a Nation governed by law, yes but Common sense doesn’t have to be written in the law. Thinking outside the box is not a talent if you can’t think once think twice and save this country. Recently opposition NASA foot soldier and SUNA East MP Junet Mohammed was arrested and detained in Homabay after truly making inciting ethnic based remarks, I kept my mouth shut and my keyboard off till I found substantiated evidence through a video footage

We have to call a spade a spade and not a big spoon. His detention was authentic and just. His statement that Raila will be President of Coastal region, Eastern and North Eastern, Nyanza and Western region was a message of ethnic division. He went ahead to state Raila Odinga will be Sworn in Tononoka ‘wapende wasipende’ but only when results are manipulated. With all measures above considered, we’ll be up to the task.