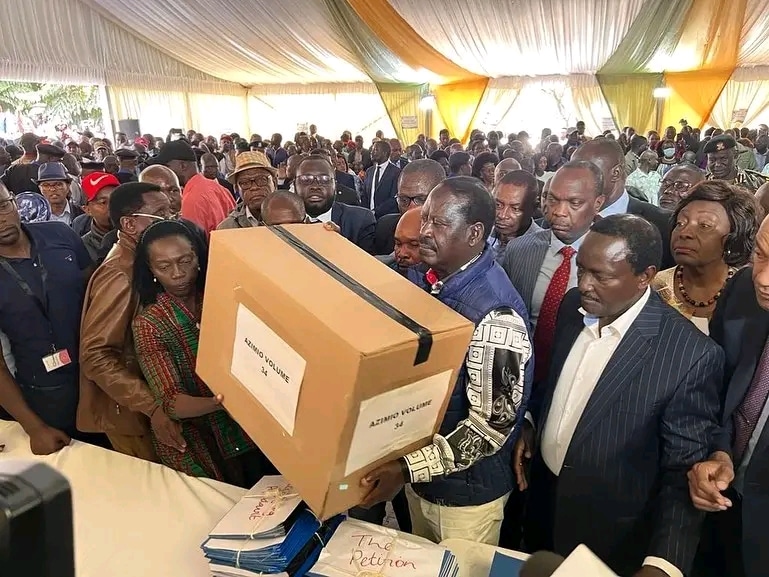 Azimio legal team arrived at Milimani Law Courts to file a petition challenging DP William Ruto's victory, with documents packed in a white truck. The team has 39 boxes with exhibits.

Kenya veteran opposition leader Raila Odinga and his running mate Martha Karua has urged the Supreme Court to declare that the presidential elections was not conducted in accordance with the constitution.

The Azimio La Umoja-One Kenya leaders want the Supreme Court to declare that President-elect William Ruto did not meet the constitutional threshold of attaining 50 percent plus one vote as required by the constitution.

Odinga further want the court to declare that Ruto was not validly declared as a president elect and that the declaration by Independent Electoral and Boundaries Commission Chairman Wafula Chebukati in August 15 is null and void.

It is his prayer for the court to quash the certificate issued to Ruto and declare him as the president-elect, alleging that he has evidence to show that the votes were manipulated in favour of the deputy president.

They have sought in the petition an order directing the electoral body to organize and conduct fresh presidential election in strict conformity with the constitution and the Elections Act.

Director of Criminal Investigations (DCI) George Kinoti has also been dragged into the dispute as the Azimio leaders want him to avail equipment seized from Venezuelans just before the elections and a laptop retrieved from UDA Party agent Koech Geoffrey. They want the DCI boss to do a forensic analysis and examination of the laptop(s) and content.

Related Content:  Governor Mutua Says Ruto Is Against BBI Because He’s Corrupt And Out To Confuse Kenyans

They wants the court to declare that IEBC as presently constituted is incapable of presiding over and rendering proper , credible , verifiable and valid presidential election.

Raila argues that the irregularities and errors in the 2022 presidential election were not minor or administrative or occasioned by human imperfection.

In his court documents filed at Supreme Court of Kenya, Raila and his runningmate claims they will demonstrate that the presidential election was conducted from beginning to ‘end’ by a rogue chairperson with premeditated intent and objective of subverting and undermining the integrity of the electoral process in order to secure a fraudulent results.

The further argue that IEBC chairman Wafula Chebukati was culpable of grave misconduct in his decision in 2017 which emboldened him to graduate the acts of misconduct to blatant criminality and subversion.

Nine petition has been filed seeking to overturn the victory of president elect William Ruto.

According to the Raila and his runningmate, the final results declared by Chairman Chebukati was not complete , accurate, verifiable or accountable and cannot be the basis for a valid and legitimate declaration.