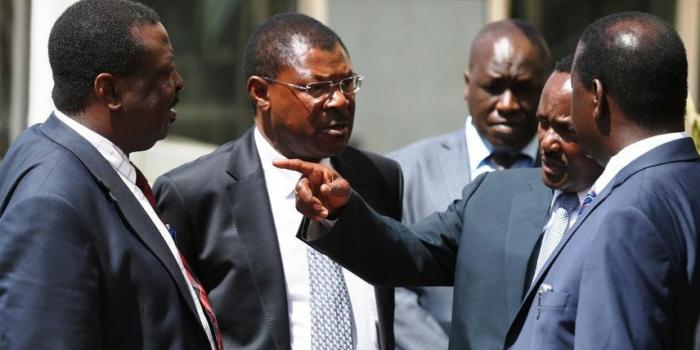 Since its inception, the idea of a united opposition gave pro-change and democracy supporters a sigh of relief. The formalization of NASA pumped a new breath of fresh air with hopes skyrocketing when the opposition leaders; Raila Odinga, Kalonzo Musyoka, Musalia Mudavadi and Moses Wetangula came together and vowed before the public to remain together in forming the indomitable team that would send Jubilee home.

Kenya is hungry for change, and that’s why the NASA idea was readily embraced even by the civil society. However, things have changed three months later into the formalization of NASA; confusion has reigned with the principals unable to decide on who will fly the coalition’s flag. With less than three months to the election, the delay of naming the flagbearer is doing more damage than good while giving an upper hand to the Jubilee capitalizing on the push and pull to advance their agenda.

Without sugar coating of issues, only a united opposition can put up the much-needed energy to remove Jubilee out of power in the absence of this then everyone else can forget about grabbing power out of Jubilee’s grasp. Greed, selfishness and extreme ego are going to be NASA’s greatest undoing as both principals stay their grounds with none ready to deputize the other. Everyone wants to be the President and not only the Strategic Committee’s recommendation, but private talks amongst them have failed to break the ice. The leaders have shown apparent characteristic of typical Kenyan politicians who put their personal interests ahead of the country

NASA stands at a high point in history to save or permits destruction of the country by allowing more years of Jubilee reign. History will be there to judge them, and it will be written how greed denied Kenyans a chance to taste change. There are genuine fears that some leaders would yank out of the umbrella a move that would send jubilee into an early celebration. One Saitoti is remembered for his quote that there comes a time when the interest of the country supersedes the personal. This is what each of the principals must keep in mind if at all they have any good intentions for the country.

Again they’re at liberty to satisfy their personal interests, breaking up the pact and go whichever way. Whichever way it goes, one thing remains Crystal clear that selfishness and greed cloud Kenya’s politics. All the principals know their strengths, they know well who can put up the best fight to trounce Jubilee but greed seems to be bigger and priority to them than Kenyans needs. The unnecessary drama can also be solved by allowing NASA supporters to participate in an open electoral process to decide on the leader. Time is running out, delay of naming NASA flagbearer is giving a failed Jubilee regime confidence in retaining the seat.

Lastly, to NASA leaders, will you let greed and selfishness the masters in self-destruction win over serving Kenyans interests? As you deliberate with the unending, unsuccessful talks to name the flagbearer to remember time is running out and history is closely watching for yours will be written based on your choices.

Related Content:  Kenya's Biggest Problem Is The Inner State Capture And Not Even IEBC
Kenya Insights allows guest blogging, if you want to be published on Kenya’s most authoritative and accurate blog, have an expose, news, story angles, human interest stories, drop us an email on tips.kenyainsights@gmail.com or via Telegram
Related Topics:
Up Next

Women Representative Position Is Not A Reserve For Politicians Girlfriends