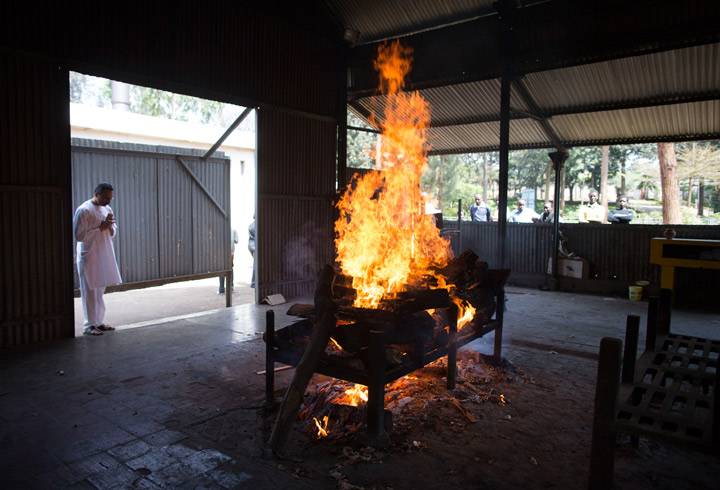 Mourners observe the burning body Of a relative during cremation ceremony at a crematorium in Nairobi.

“You’ll be lucky if you made it to August” the exact words doctors had told Safaricom CEO Bob Collymore on his condition. Knowing of his imminent death, the late was fully aware and prepaired.

“Death is inevitable and I have made the decision not to cling on the thought of it because it will eventually come; I just do not know when. I have chosen to focus on the things that are more important to me. Now I know it’s kind of impossible for somebody to live for 200 years.” ~ Bob Collymore.

According to his wishes, his body was to be cremated in a private ceremony, it happened a day after his death.

Wealthy and prominent politicians, church leaders and sports personalities increasingly are opting out of traditional burial ceremonies and choosing cremation. It’s nothing new in Kenya since Hindus and Buddhists have been doing it.

Since such burials are often private and away from the public eye, many are clueless as to what it really entails and that’s what we’re going to show you. Because of the possible trauma it come with, family members of the deceased are often advised not to witness the cremation process and instead wait for the ashes.

When a hearse arrives, there is a short session for prayers and then the body is transferred onto a trolley and then wheeled to the cremation chamber.

Attendants places the body on an open pyre of wood for those being cremated on wood. There’s the option of using electric kiln which uses diesel or just firewood.

The body is placed between logs and sawdust placed beneath the rack to be used to light the fire. The temperature is  1,000 to 2,000 degrees Celsius. A family can be invited to light up the fire or the cremator does it.

The first step in the cremation process is to get written consent from the family of the deceased.

“The second step is to know from the family how long they would want their loved one’s cremation to last.”

Cremation takes place in a cremation chamber, also known as a retort, of a crematory.

The chamber is preheated at a set point and then the body is quickly transferred there through a mechanised door to avoid heat loss.

During incineration, the body is exposed to a column of flames produced by a furnace fueled by natural gas, oils, propane, etc.

“The body is doused in a flammable substance. In Kenya, what is mostly used is kerosene and diesel. Petrol cannot be used because it is highly flammable. When diesel is used, the body burns at a faster rate than when kerosene is used,” says Njoka a journalist and an expert in cremation.

As the corpse is placed in a casket or container — preferably prepared from a combustible material –, the container burns down.

Next, the heat dries the body, burns the skin and hair, contracts and chars the muscles, vaporises the soft tissues, and calcifies the bones so that they eventually crumble. The gases released during the process are discharged through an exhaust system.

The bodies are mostly burned one at a time. There is usually no smell because the emissions are processed to destroy the smoke and vaporise the gases that would smell.

Some crematories have a secondary afterburner to help burn the body completely. Otherwise, the cremation technician may have to crush the partially cremated remains with the help of a long hoe-like rod.

The cremation remains are usually pasty white in colour.

These remains are transferred in a cremation urn and given to the relative or representative of the deceased. If you do not have an urn, the crematorium may return the ashes in a plastic box or default container.

While it can be extremely scary for the first timers, seasoned cremators go about their job unbothered like mortuary attendants, in fact, they turn the body in the furnace to ensure it completely burns. Vital organs like the heart and lungs are said to take longer to completely burn so the cremator will often open the furnace to turn and ensure they burn completely.

Cremation fee for an adult is Sh16,800, Sh14,800 for a child and Sh12,800 for infants it can also go as high as Sh100,000 this is entirely dependent on the place it’s happening and method adopted. This is a fraction of what we spend on traditional burial ceremonies.

In developed countries, they’ve developed more sophisticated cremation methods that can take about 20-30 minutes and the whole things is done. However, in Kenya, there are four durations cremations can take: 8 hours, 4 hours, 1-and-a-half hours(the most expensive and likely used for Bob Collymore).

People and different cultures have taken up cremation for various reasons for instance Hindus do not believe in the bodily resurrection and the reuniting of each soul with its physical body. They thus place no importance on preserving the corpse, which is the intent of burial in Christianity and Islam.

Would you prefer traditional burial or the quick cremation way?

Retired Commissioner Isiah Osugo In Trouble Over Sh1.8B Theft At The Prison