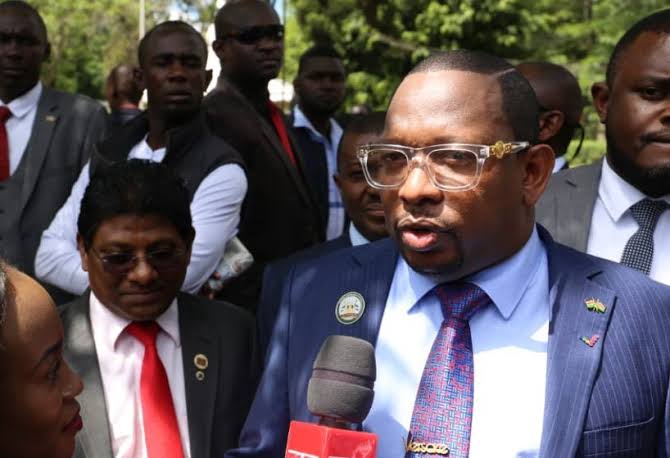 I’m 100% sure the President is not aware about this but I have been saying the people around my Boss are messing this country.

How on earth do you defy a high court order just the same way they defied an order we secured against the vandalism of the public sanitization booths and send heavily armed police officers to supervise an illegal eviction and demolition during this deadly Covid-19 pandemic period. The elderly, Children and their Mothers are sleeping in the rains, what a curse? Let me study the Rome statues and engage the local and international lawyers to deal with this issue, coz this is a serious crime against humanity and this is the right time PS Interior Karanja Kibicho, Nairobi RC Wilson Njega and Nairobi Regional Police Commander Philip Ndolo MUST be taken to ICC for breaching articles 1.5, 53 and 7(1)(k) of the Rome Statute of the International Criminal Court;

FIND MY ROUGH DRAFT BELOW:

BEFORE THE INTERNATIONAL CRIMINAL COURT

(ON BEHALF OF THE PEOPLE OF NAIROBI CITY)

The Plaintiff, H.E. Governor Mike Mbuvi Sonko, is the elected representative of the People of Nairobi City as the current Governor of Nairobi City County with a distinct constitutional responsibility that includes protecting the public health interests of the Residents of Nairobi City under the Constitution of Kenya. The Plaintiff along with his eponymous NGO Sonko Rescue Team has won numerous accolades for his philanthropic and humanitarian activities especially to Nairobi City Residents in need and/or in the informal settlements.

For committing such crime or crimes that are recognized by the Rome Statute and International Criminal Court, including:

a. Crimes against humanity, in violation of Article 7 (1) (k), of the Rome Statute of the International Criminal Court; and

b. Such other crimes for which the Defendants and any of their agents may be responsible in violation of the Rome Statute that may arise from any investigation conducted herewith.

The Plaintiff, MIKE MBUVI SONKO, a natural citizen of the republic of Kenya domiciled in Nairobi, Kenya, comes before the Office of the Prosecutor and this Court, to address violations of art. 7, item “k”, of the Rome Statute and to propose that you investigate, accuse, and indict MR. KARANJA KIBICHO, the Principal Secretary, Ministry of Interior and National Coordination in the Republic of Kenya, who can be found at Harambee House, along Harambee Avenue, Nairobi City and MR. WILSON NJEGA, the Regional Commissioner for Nairobi Region, in Nairobi City who can be found at Nyayo House, along Uhuru Highway and MR. PHILIP NDOLO, the Regional Police Commander, at Nairobi Police Headquarters, along Milimani Road in Nairobi City for committing one or more CRIMES AGAINST HUMANITY by his victimizing the Nairobi City population, particularly the elderly and infirm and residents of informal settlements as is more particularly described herein.

Related Content:  How The Presidential Election Was Rigged Filed Evidences By NASA Shows

The Defendants have jointly and through the police officers and officials under them systematically been targeting and killing people during curfew time from 7PM to 5Am within Nairobi City. Further, the Defendants have been ordering the demolition and vandalization of installed by the Defendants across Nairobi City informal settlements to stop spread of Covid-19 infections especially in congested areas where majority of the population cannot afford or access water and sanitizers for regular sanitizing. As a result of their vandalism, Covid-19 cases have risen in poor neighbourhoods like Kawangware, a slum in Nairobi City. The denial of essential Covid-19 prevention services to the residents in the poor neighbourhoods appear to be calculated by the Defendants who would benefit from administering emergency funds appear to target the poor sections of Nairobi Population who cannot afford self-care to key the virus from their neighbourhoods. Further, the Defendants have been effectively blocking the Plaintiff and his registered NGO from distributing free masks, sanitizers and relief food to the masses for political ends thereby risking the lives of the poor residents in the informal settlements. The Defendants have also deployed intimidation and violence against humanitarian workers of the Sonko Rescue Team to stop them from giving emergency assistance from residents in informal settlements. Finally, the Defendants have been evicting and displacing populations during Covid-19 pandemic without justification for example in Kariobangi North without justification or court order thousands of Nairobi City residents exposed to the deadly virus out in the cold with nowhere to go or forced to move to other neighbourhoods to put up with relatives against social distancing rules.

Contrary to the clear and unequivocal instruction of health authorities worldwide, the WHO and that of all nations that have been or are at the epicenter of the pandemic including Republic of Kenya, the Defendants have persisted in blocking any effort to the public by the Plaintiff and others including the Sonko Rescue Team to reach the congested informal settlement areas in Nairobi City County to supply them basic necessities necessary to prevent spread of the pandemic in the slums. This appears to be a calculated move given that both Mr. Kibicho, Mr. Njega and Mr. Ndolo seem to have a problem with the Plaintiff accessing the informal settlement residents as if they want the pandemic to spread in those areas for them to reap big in emergency funds and grants in event of tragedy. The criminal acts of the Defendants have taken the following forms:-

1. On diverse dates in the Month of March and April 2020, the Defendants have instructed officers to arrest and/or impounded goods worth thousands of dollars including Facemasks meant for supply to the Residents of informal settlements in Nairobi City by agents of the Plaintiff. The Defendants have failed to justify their sinister actions which risk millions of lives with any official position except bureaucracy.

2. On diverse dates in the Month of March and April 2020, the Defendants have instructed their officers and officers working under them to stop the Plaintiff’s agents and officers from fumigating and disinfecting streets and public establishments across Nairobi City informal settlements although this has proven to work to lower the risk of the pandemic in other cities including Wuhan City in People’s Republic of China.

3. On diverse dates in the Month of March and April 2020, the Defendants have through their officers and officials working under them demolished and vandalized installations including sanitization booths installed by the plaintiff in informal settlements across Nairobi City meant to stop spread of Covid-19 pandemic in the congested areas through disinfection of persons entering or exiting those areas. These installations have proved effected in other international cities including Dubai and Doha raising the question why the Defendants don’t want them availed to Nairobi City residents even free of charge.

The Rome Statute in its listing of Crimes Against Humanity provides in Article 7:

1. For the purpose of this Statute, “crime against humanity” means any of the following acts when committed as part of a widespread or systematic attack directed against any civilian population, with knowledge of the attack:

k) Other inhumane acts of a similar character intentionally causing great suffering, or serious injury to body or to mental or physical health.”

The jurisdiction of this Court is fully justified in view of the obviousness of the commission of crimes against humanity by the Principal Secretary of Interior and National Coordination of Republic of Kenya, Eng. Karanja Kibicho and Nairobi Regional of Kenya, Mr. Wilson Njega. It is the position of the Plaintiff that the actions of Mr. Kibicho and Mr. Njega fall within the meaning of “attack” or are tantamount to an “attack” when read in conjunction with the Preamble of the Rome Statute, which recognizes that some crimes that “threaten the peace, security and well- being of the world” must be addressed, making Article 7 applicable to the case at hand.

Materially, the actions of these 3 officials represent knowingly and intentionally causing the spread of contagion, substantially endangering the physical health and well-being of the Nairobi Residents population, exposing them to a lethal virus which has the capacity to swallow the population whole, as already has been seen in several countries. Mr. Kibicho, Mr. Njega and Mr. Mr. Ndolo actions constitute a widespread or systematic attack directed against civilian population under their charge in violation of Article 7(k) of the Rome Statute and is a Crime Against Humanity.

Related Content:  Wahome Thuku: The Faking Of A Hustler

The gravity and extent of the crimes against humanity committed in Kenya by the Defendants cannot be understated. They are of international concern and the magnitude of the effects of the Defendant’s actions are deadly, but the prospect for his being held accountable at the national level are nil. Hence the need for opening an investigation, leading to Defendants’ prosecution. The victims of Defendants’ alleged crimes will be thousands and could be millions. There is no question the actions of the Defendants will inevitably create a humanitarian crisis, the number of casualties from which will equal or exceed any genocide to have been presented to this Court.

Attached is Hardcopy, Softcopy, Audio and Video evidence of the Defendants actions in contravention of the Rome Statute.

b) That the International Criminal Court obtain such information from the Government of Kenya regarding this matter, and compel the personal testimony of Mr. Karanja Kibicho, Mr. Wilson Njega and Mr. Philip Ndolo as to their conduct in ordering the demolition of neighbourhoods during Covid-19 Pandemic in Nairobi City’s informal settlement thereby exposing the Residents, banning distribution of facemasks, disinfection of public facilities and vandalizing of sanitization booths set up by the Plaintiff and his organization in line with the global health guidelines of the World Health Organization – WHO in the fight against Covid-19;

c) The trial and conviction of Mr. Karanja Kibicho, Mr. Wilson Njega and Mr. Philip Ndolo for their crimes against humanity, for exposing the lives of Nairobi City citizens, with such actions that are likely to help accelerate the proliferation of the Covid-19; and

d) That Mr. Karanja Kibicho, Mr. Wilson Njega and Mr. Philip Ndolo receive the appropriate penalty for the crimes against humanity that they have committed.

NB: Since some of my lawyers have already been intimidated in pursuing the termination of the deed of transfer of functions. Lawyers willing to help me in pursuing the above matter should contact me through 0739555555/0722886600.

Ruto’s Predicament In Jubilee Party Is Not An Isolated Case