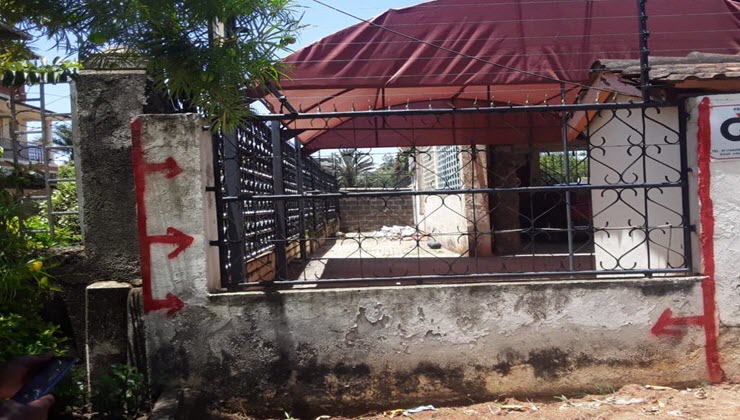 The building that had been earmarked for demolition. Photo courtesy.

Kisumu County officials are facing a backlash from locals following what they term as a suspicious deal. The county had earmarked structures sitting on public land for demolition in posh Milimani Estate.

While bulldozers crushed down structures that were erected on the road reserve, Jayesh Patel’s building, which has blocked a three-meter pathway of Jobita Road, was spared.

Jayesh in his flimsy defense say he wasn’t aware that the property he bought ten years ago was on a public land which is rubbish or carelessness on his side for not doing due diligence. What irks the locals is the special treatment the Asian tycoon was accorded by being scared while the rest were left in the cold.

The residents are accusing the county officials of having been bribed to spare the house and are calling upon the governor to reign in and flatten the house which is on public land.

A letter by Kisumu County Director of Surveys Rogers Kobado following a survey of the road indicated that the three-meter-wide pathway cut through parcel numbers Kisumu/Block 8/259 and Kisumu/Block 8/211, connecting Jobita Road with an adjacent road had been blocked by a stone wall.

The letter dates December 17, 2020, and addressed to the Chief Officer Lands, Survey and Physical Planning, however, noted that despite the perimeter fences of the two parcels having been clearly defined, a block fence had been constructed, sealing off the road.

Kisumu City Manager, Abala Wanga, said he had visited the building which he confirmed encroaches on the land meant for a public road.

He, however, said after discussions, the proprietor said the road had been sealed off because for security reasons.

“Several people have suffered due to the ongoing demolitions in the town. Why are some people given the opportunity to be heard even after it is found that they encroached on public land?” complained one of the residents.

There are credible accusations that fraud businessmenfraud businessmen largely Asians have encroached public land and are buying their ways throughout the demolitions. “The demolitions have become a cash cow for corrupt county officials, while the governor wants to change the face of the city, some people are taking advantage and extorting businessmen who grabbed public land. The authorities should investigate the matter, it is a big cartel.” Said one of the residents.

Kisumu Shooter Identified As A Bright Student From Siaya