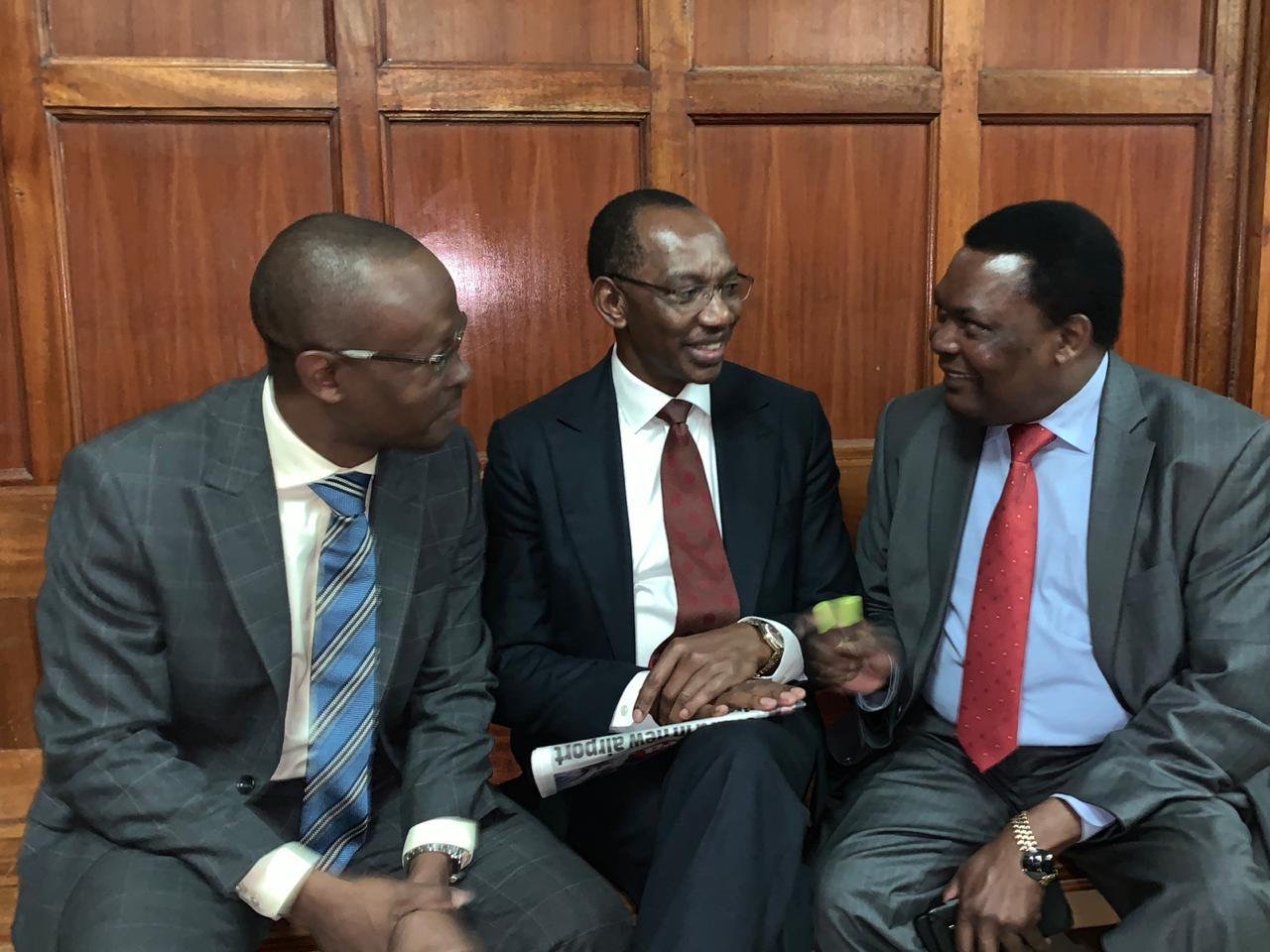 Humphrey Kariuki (middle) with his lawyers Cecil Miller and Kioko Kilukumi in court.

When Humphrey Kariuki, one of Kenya’s reclusive billionaires was charged with nine counts nine counts relating to tax evasion amounting to Sh17 billion, many including him termed it as a witch-hunt. The calculating businessman who during the time of his hunt was hiding outside Kenya and a dual citizen of Cyprus was listed on the Interpol’s red list by the DCI Kinoti according to media reports. He would later voluntarily resurface in Kenya in a bid to cloth the embarrassment of international arrest and presented himself in court to answer to the charges.

He has vehemently denied the tax evasion accusations claiming the charges are malicious and efforts by his business rivals to taint his name. However, just how clean is Humphrey Kariuki, the business mogul who always has a way out of any crisis he dives in?

Back in 2016, the International Consortium of International Journalists (ICIJ) released to the public one of the biggest leaks of documents and largest collaborations of journalists in history, the Panama Papers. These documents provided an unprecedented look at the secretive industry of offshore finance. Among the 191 Kenyans named, Humphrey Kariuki Ndegwa a Kenyan Tycoon saw himself listed in these papers.

Most know the name, Humphrey Kariuki Ndegwa, founder of Janus Continental Group, a conglomerate that includes The Hub – a premier shopping mall in Nairobi; Africa Spirits, a leading manufacturer of Alcoholic beverages; Dalbit Petroleum, one of the largest oil distributors in East and Southern Africa, and Great Lakes Africa Energy. I could go on and on, Ndegwa is also the owner of the 5-star Fairmont Mount Kenya Safari Club, and the neighboring Mount Kenya Wildlife Conservancy and Animal Orphanage. The controversial liquor billionaire has also been in the news recently after authorities launched a manhunt for him on allegations of evading taxes of more than Ksh3 billion and smuggling substandard ethanol products into the country.

Now that you are acquainted, let’s get down to business. The Panama Papers documentsPanama Papers documents, combined with one year of reporting, revealed how 140 politicians, as well as celebrities, drug dealers, alleged arms traffickers, and the global elite, obscured their wealth (legally and illegally) and questionable business deals through hard-to-trace companies and tax havens, the investigation centred around Mossack Fonseca a little-known but powerful law firm based in Panama, -hence the name-. Here they created shell companies, and corporate structures that were used to hide ownership of assets and evade taxes.

The billionaire was listed as a shareholder in Belgravia Services, registered in Seychelles. Interestingly Belgravia Services had its physical address listed as Cyprus, comes the play. Tax havens -Scheme involves registration of firms in countries that have lower rates Legal game-. The practice involves registration of holding companies in countries that have lower tax rates than Kenya’s, then coming back to trade as a foreign firm and avoiding the dreaded corporate tax, this ploy is well explained here. The company is still active to date.

It is evident the controversial billionaire ‘was’ using the offshore company to avoid tax in the country. How the government used any of the data provided is still a mystery.

With the leak came the potential availability of previously inaccessible taxpayers financial data, almost five years later the Kenyan government has completely slept on its ears, the leaked papers rocked governments all over the world, In the days and weeks after the first Panama Papers stories were published, the prime minister of Iceland and a minister in Spain resigned and police in Panama and Switzerland raided the office of Mossack Fonseca and even the soccer body UEFA respectively.

However, the big question is this the only shell company not only used by Humphrey but other questionable billionaires? This is reliant on the DCI, KRA and their investigations to dig deeper beyond the ICIJ investigations to nab multi billion dollar tax cheats.

Countries have recovered hundreds of millions of dollars in taxes, Actually more than $1.2 billion in back-taxes and penalties has been publicly collected by governments around the world after the 2016 investigation, Kenya? Nil, Infact even Kalpana Rawal who was found to be a director and shareholder in a total of 11 companies registered in the British Virgin Islands exited her job as Deputy Chief Justice due to her age. No investigations, these cases of fraud have totally been forgotten.

As KRA goes on an extreme hunt for tax cheats its wanting that unscrupulous business who hide in tax havens continue to get away with the crimes while innocent Kenyans faces  the wrath of watchdog KRA. The laws need to be applied equally as KRA goes for mobile transactions to nab tax cheats, those using tax havens need to be equally dealt with.