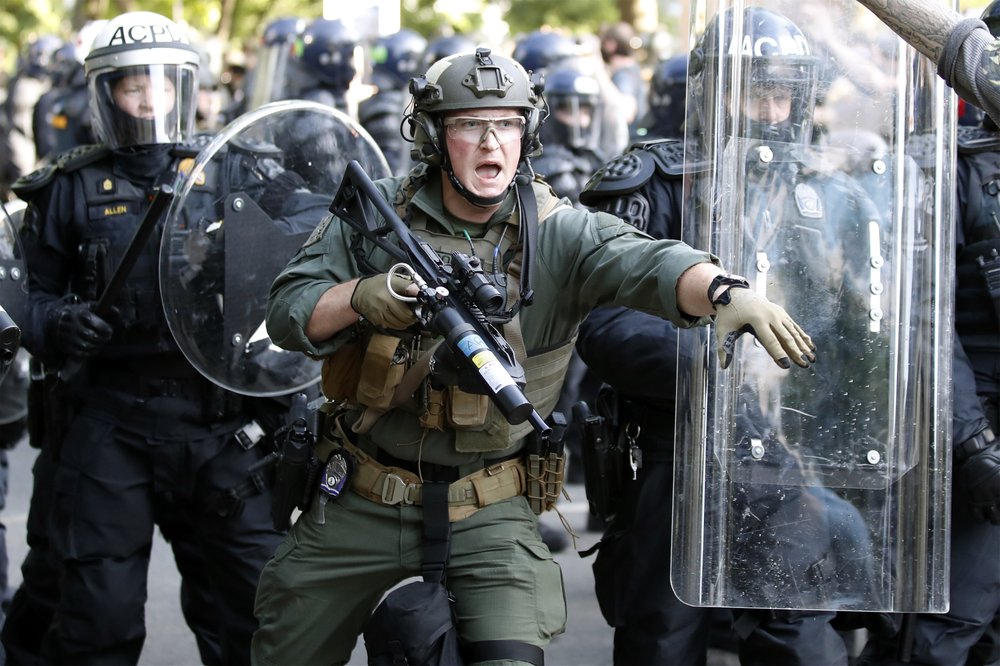 Police begin to clear demonstrators gathered as they protest the death of George Floyd, Monday, June 1, 2020, near the White House in Washington. Floyd died after being restrained by Minneapolis police officers. (AP Photo/Alex Brandon)

US President Donald Trump made a surprise visit to St. John’s Episcopal Church in Washington, DC on Monday which was vandalized during overnight protests over the death of George Floyd.

His visit came shortly after he said he would be “going to pay my respects to a very very special place” during his press briefing at the White House.

To pave the way for Trump and his entourage to walk to the church, which also suffered damage from a fire set by protesters in its basement, police used tear gas to clear protestors from Lafayette Park, the focal point of a fourth day of protests.

Trump posed for photos in front of the church and raised a black-covered Bible for reporters to see.

“We have a great country. Greatest country in the world,” said Trump.

Speaking to CNN, Mariann Budde, bishop of the Episcopal Diocese of Washington, DC, rebuked Trump’s visit, which she said she found out about by watching it on TV.

“I am outraged. The president did not pray when he came to St. John’s, nor as you just articulated did he acknowledge the agony of our country right now,” said Budde.

The protests have been raging in the US since May 25 when a video went viral on social media showing Floyd being pinned down by Derek Chauvin, a white police officer in Minneapolis, Minnesota, as he was being arrested.

Chauvin knelt on his neck for nearly nine minutes.

Shortly after, Floyd appeared to lose consciousness, but Chauvin maintained his position on the victim.

He died shortly after being taken to a hospital.

His last words were “I can’t breathe,” which became the slogan of the nationwide protests.

Floyd was killed by “asphyxiation from sustained pressure,” an independent autopsy found Monday.