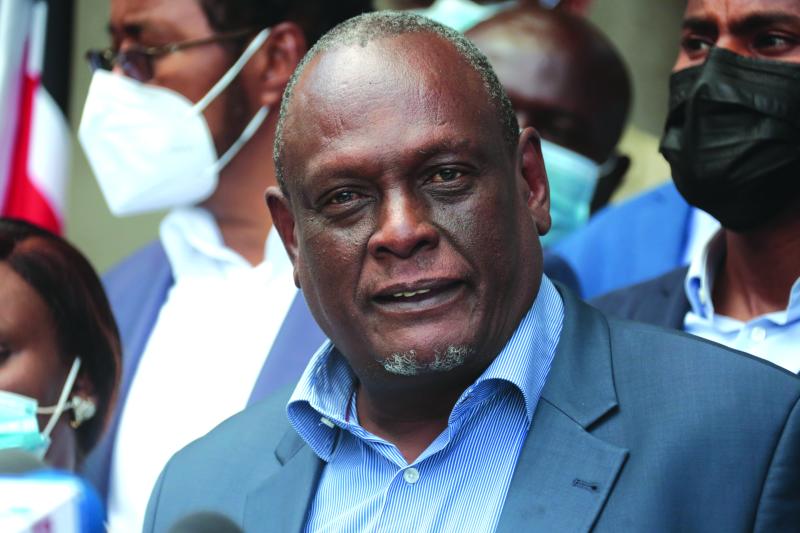 Kenya Insights can now reveal that a dodgy small firm Kilig, already acquired the fridges necessary for stocking Russian vaccine Sputnik V. The company created in January 2020 is headed by well-connected consultant Willbroad Gatei Gachoka who is a childhood friend and business partner of David Murathe, vice-chairman of the ruling Jubilee Party.

This is despite government’s relentless effort to ban the vaccine which is said be the best according to CNN Health report.

Documents in our possession show that Kilig Limited owners transferred tenders to another firm to deal with Kemsa. Willbroad Gatei Gachoka is an aide of Murathe and was sacked by Uhuru Kenyatta on December 18 2019 as chairman of Kenya Planters Cooperative Union after the board of directors awarded themselves hefty allowances leaving it dry.

On January 22, 2020, Gachoka had Kilig Limited registered with a Chinese National Zhu Jinping of P O Box 36814-00200 Nairobi. On June 16, 2020, Kilig Limited after landing a lucrative deal at Kemsa, engaged a firm Entec Technology Company Ltd of P O Box 37925-00100 Nairobi, to deliver PPE kits to Kemsa from China at the price of USD 28,535,000 that is Sh3 billion. John Mburu is associated with Entec remotely and was to clear the goods with KCB funding the tender. Kilig Limited having brokered the tender from Kemsa at Sh4 billion played it safe by involving Entec thus not being responsible for any criminal or legal implication. Those in the deal were to share a cool Sh1.2 billion.

Kilig Limited and Entec Technology entered in what industry players call a bidding commercial contract. The broker was Mburu, well versed in clearing and forwarding deals. By virtue of being close to Murathe, Gatei kept on dropping Murathe’s name and that of State House. It was on these grounds that appearing before the senate health committee, John Manjari, the suspended Kemsa CEO revealed, how he was under pressure from CS Mutahi Kagwe and PS Susan Mochache to award tenders to specific firms. Entec was to supply PPE sets in two dispatches. First were 200,000 kits on June 28 2020 and the second installment of 239,000 on July 10, 2020. Documents we have show, to avoid any suspicion in the dealing, Kilig was to enter an Escrow Account Management Agreement with Entec Technology.

Here once Kemsa paid Kilig, it was mandatory for it to pay Entec. Here KCB was brought in the deal. Why KCB being a public bank was to fall under the pressure of political wheeler-dealers. Entec Technology in the documents signed with Kilig gave bank account details where its payments were to be forwarded. The said account transacts business in USD is Stanbic Bank, Westgate Branch. Reports indicate, after Kemsa scams erupted and went public, no payments were made to escrow account. Fearing arrest, Gatei and Zhu Jinping moved shares of Kilig Limited to a city young lawyer as a major shareholder.

Gatei and Ivy Minyow Onyango, the young lawyer are lovers. In documents, Gatei did not change the firm contacts. Kilig Limited enjoyed direct procurement. Manjari signed the award letter with a three months grace period to deliver the goods. The trouble started when then Kemsa procurement director Charles Juma wrote to Manjari twice in April and June raising que0stions over why Kilig was given direct procurement for a tender that was to be competitive. By then, word had spread, Kemsa was liquid. By then, Mochache had written to Manjari in relation to an audit of procurement made on behalf of the ministry relating to Covid-19 payments using World Bank Funds. 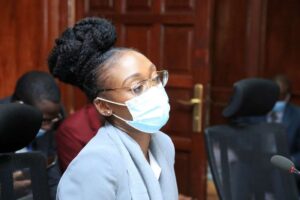 While appearing before the National Assembly’s Public Investments Committee (PIC), Ivy who’s the liste sole director of Kilig told the committee that she had no information on the signatories to the company’s bank accounts at Equity Bank and SBM Bank.

“I need more time to go back to the bank and get the right information. I cannot remember who the signatories were because there was a joint venture for procurement of Covid-19 items. Give me two days to find out the bank signatories,” the 27-year-old lawyer told the committee.

Ms Onyango claimed she could only recall that Kilig had accounts at the two banks but did not know who their signatories were.

“We went into joint venture and opened bank accounts for envisioned transactions. I don’t know if the accounts were closed,” she said.

Members of PIC, however, dismissed her claim and ordered her to provide a full disclosure of the account holders.

“You cannot do business worth about Sh4 billion and you don’t know the bank account of your company yet you are a sole shareholder. You have portrayed yourself as a wise woman. How can you not know where your bank accounts are yet you chased for this big deal?” PIC chairman Abdulswamad Nassir said.

Ms Onyango said Kilig had various partners, including manufactures and distributors, who came together to deliver the supplies to Kemsa.

She told PIC that the joint venture also involved Wilbrod Gachoka, who has since resigned as director of Kilig.

“There was Wilbrod Gachoka and Entec Enterprises a Chinese company who had vested interest in the joint venture,” Ms Onyango said.

Ms Onyango told the committee that Collins Bush Wanjala a son of Budalang’i MP Raphael Wanjala  was also a director of Kilig and that she took over the company from the junior Wanjala at a cost of Sh10,000.

Ms Onyango told MPs that she incorporated Kilig in February 2019 after receiving instructions from his clients, Mr Gachoka and Zu Jinping.

Mr Nassir, however, disputed the claims by Ms Onyango, saying official documents showed she never participated in the registration of Kilig.

The PIC chairman tabled documents by Registrar of Companies, which showed that the firm was registered on January 22, 2020, with its directors as Zhu Jinping and Willbroda Gachoka.

In April, the two transferred their shares to Collins Bush Wanjala, who later handed them over to Ivy Minyow Onyango in May.

Kemsa did not do any due diligence on Kilig, including its financial capability to supply the goods, shareholding or pre-qualification documents.